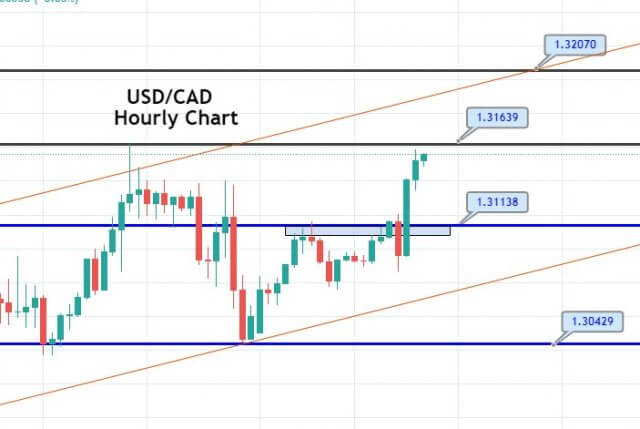 The USD/CAD succeeded in extending its previous day winning streak and still taking bids around well above the 1.3100 level. However, the positive tone around the currency pair could be associated with the broad-based U.S. dollar on-going strength, backed by the Friday released upbeat U.S. jobless rate data and hopes of the U.S. stimulus. The U.S. dollar gains were also supported by the high safe-haven demand in the market.

Despite the hopes of the U.S. stimulus package and coronavirus vaccine, the market trading sentiment represents mixed signals as the confused performance of Asia-Pacific stocks and declines of the U.S. 10-year Treasury yields 0.70%, tend to highlight the risk-off mood. This, in turn, underpinned the U.S. dollar and extended some support to the currency pair.

However, the reason behind the risk-off market sentiment could be attributed to the intensified US-China tussle. Both nations are using very harsh words against each other. The latest headlines suggest that the U.S. is considering banning some or all products made with cotton from China’s Xinjiang province. This happened after Beijing’s visa restrictions over the American reporters. The gloomy headlines concerning the Brexit also weighed on the market trading sentiment, which eventually increased the market’s safe-haven demand.

At the data front, the headline Non-farm payrolls data for August missed expectations with +1371K. However, the unemployment rate dropped to 8.4%.vs 9.8% expected. In the meantime, the Average Hourly Earnings exceeded predictions, with +0.4% MoM in August vs. 0% expected.

At the USD front, the broad-based U.S. dollar has resumed its gaining streak since the beginning of this week and is supported by some heavy selling pressure around the European currencies. The concerns about rising US-China tensions increased the safe-haven demand in the market, which also helps the U.S. dollar as it safe-aven status. Thus, the gains in the U.S. dollar kept the currency pair higher. Whereas, the U.S. Dollar Index, which tracks the greenback against a basket of other currencies, rose by 0.13% to 93.168 by 9:53 PM ET (2:53 AM GMT).

The crude oil prices failed to stop its previous da losing streak and dropped further below the 39.00 marks. However, the reason for the bearish bias around the crude oil prices could be attributed to the renewed worries over the economic recovery after the U.S. reported fresh COVID-19 cases. Also weighing on the oil prices could be the reports that suggested the end of the peak driving season in the U.S. Thus, the declines in oil prices undermined demand for the commodity-linked currency the loonie and contributed to the currency pair gains.

Despite the combination of supporting factors, the buyers seemed to struggle to push the USD/CAD currency pair beyond a two-month-old descending trend channel. However, the traders avoided placing any strong bids ahead of the latest BoC monetary policy decision on Wednesday. The risk catalyst like geopolitics and the virus woes will be key to watch for the fresh direction, not to forget the Brexit.


The USD/CAD is trading with a bullish bias at 1.3156, having violated the resistance level of 1.3113. Recently, the closing of the bullish engulfing candle on the 2-hour timeframe is suggesting bullish bias; therefore, we have opened a buying trade in the USD/CAD pair. Check out the trading signal below.