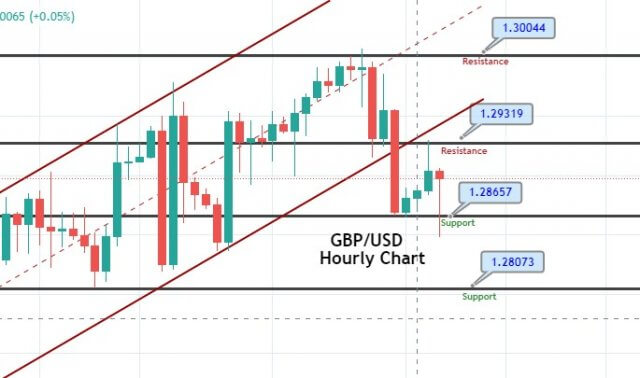 Today in the European trading hours, the GBP/USD currency pair managed to stop its previous session bearish moves and took bids around closer to the 1.2900 level. However, the bullish trend around the currency pair could be associated with the weaker U.S. dollar. The U.S. dollar lost its early-day gains as the market trading sentiment turned positive, which trimmed the U.S. dollar’s safe-haven bids and contributed to the currency pair gains.

On the contrary, the downbeat catalysts, like uncertainty over the Brexit talks and concerns over national lockdown, become the key factors that kept the lid on any additional currency pair gains. At this particular time, the GBP/USD currency pair is currently trading at 1.2872 and consolidating in the range between 1.2867 – 1.2930.

Despite concerns about the coronavirus cases in some nations and U.S. President Donald Trump’s decision to end negotiations with Democrats on the economic stimulus package, the investors continued to cheer the latest reports suggesting that the U.S. President Trump showed a willingness to pass $25 billion for Airline Payroll Support and $135 billion for the Paycheck Protection Program for small businesses. This, in turn, provided a fresh boost to the market’s risk sentiment and trimmed the U.S. dollar’s safe-haven bids.

At the Brexit front, the Brexit related uncertainties remain on the card. As per the latest reports, the Irish Foreign Minister Simon Coveney said that the European Union (E.U.) Chief Brexit Negotiator Michel Barnier will not agree on intensified discussions unless the U.K. moves its stance on state aid. Furthermore, the news that the European states push for a hardliner in fisheries and knowingly delay the negotiations exerted extra downside pressure around the British Pound, which could be considered one of the key factors that kept the lid on any additional gains in the currency pair.

Also capping the pair’s gains could be the COVID-19 worries over the rise in northern England and looming concerns over national lockdown weigh the cable. Looking forward, the market traders keeping their eyes on the Fed Chair Jerome Powell’s scheduled speech. In the meantime, the updates surrounding the fresh Sino-US tussle, as well as the coronavirus (COVID-19), could not lose their importance.