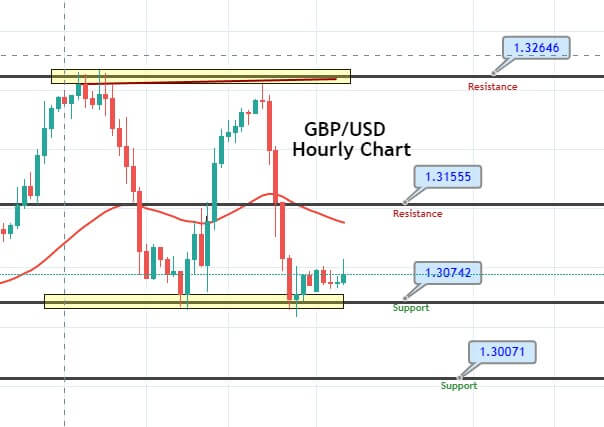 Today in the early European trading hours, the GBP/USD currency pair managed to stop its early-day losing streak and drew some modest bids on the day mainly due to the broad-based U.S. dollar weakness, triggered by the market upbeat trading sentiment. The long-lasting deadlock surrounding the much-awaited U.S. fiscal stimulus also weighed on the safe-haven U.S. dollar and contributed to the currency pair gains.

On the other hand, the bullish sentiment around the currency pair was further bolstered by the reports that the U.K. was looking forward to record-breaking economic growth in the 3rd-quarter, as per the study by the City of London economists. On the contrary, the long-lasting Brexit woes became the key factor that kept the lid on any additional gains in the currency pair. At this particular time, the GBP/USD currency pair is currently trading at 1.3108 and consolidating in the range between 1.3083 – 1.3115.

The coronavirus vaccine hopes have been supporting the market trading sentiment on the day. As per the latest report, the U.S. Food & Drug Administration (FDA) authorized the use of blood plasma from recovered patients as a treatment option. Also supporting the market trading sentiment could be the reports that the Trump Administration was considering by-passing normal U.S. regulatory standards to fast-track an innovative coronavirus vaccine from the U.K. This, in turn, undermined the safe-haven U.S. dollar and contributed to the pair gains.

At the Brexit front, the fears of the no-deal Brexit were further fueled after Friday’s failure to reach any agreements by the European Union (E.U.) and the U.K.’s policymaker. Whereas, both parties EU-UK blaming each other for the failure of reaching a deal. Thus these fears capped further upside in the currency pair.

On the positive side, the currency pair gains could also be associated with the reports that the U.K. is set for record-breaking economic growth in the third quarter as per the study by the City of London economists. It should be noted that the Small and Medium Enterprises (SMEs) gain optimism, though slowly, with the latest score of 95 at the start of the 3rd-quarter. Moreover, the Financial Times (F.T.) also shared that the U.K. seems to be on track to enjoy a record-breaking economic recovery in the 3rd-quarter, backed by consumers who are spending again after easing lockdowns restrictions and a planned reopening of schools.

Apart from this, the fears of coronavirus also decreased in the U.K. after seen the low pace in cases. According to the latest report, 1,041 new cases, down from 1,288 on Saturday, as per Reuters. In the absence of the significant data/events on the day, the market traders will focus on the upcoming speech of U.S. Federal Reserve Chairman Jerome Powell at the Jackson Hole symposium on Thursday. As well as, the USD moves and coronavirus headlines will also closely followed ahead as they could play a key role.


The GBP/USD pair is trading sideways above a strong support level if 1.3072. The support here is extended by 1.3074 level, where the bearish breakout of 1.3074 level can extend selling unto 1.3007 level. On the higher side, the next resistance is likely to be found around 1.3155 level. The 50 EMA and the technical indicators such as RSI, MACD, and 50 periods of EMA suggest a selling bias in the Cable. Let’s consider taking selling trades below 1.3075 level, while buying can be seen if the GBP/USD pair continues to close candles over 1.3075 level.