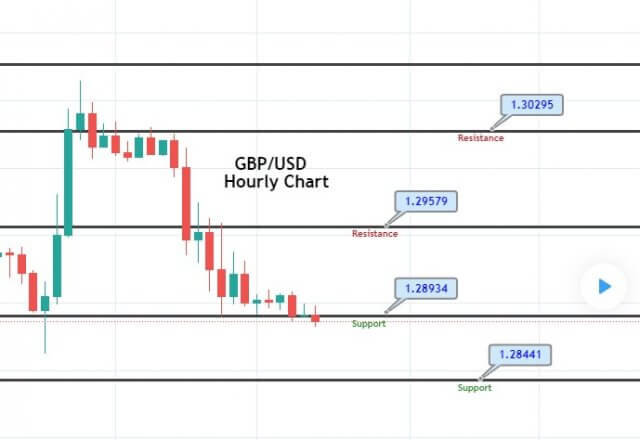 During the Friday’s early European trading session, the GBP/USD currency pair managed to stop its early-day declining streak and recovered from the daily lows of 1.2883 to the 1.2925 level mainly due to the fresh optimism about the Brexit deal, triggered by the report suggesting that the European Union (E.U.) and the U.K. policymakers are ready to extend talks, which eventually helped the currency pair to limit its deeper losses.

Besides, the Brexit hopes were further fueled after the U.K. Foreign Secretary Dominic Raab said, “We are close to a deal.” On the flip side, the broad-based U.S. dollar fresh weakness, backed by the worries over the U.S. economic recovery, also played its major role in supporting the currency pair. On the contrary, the worsening COVID-19 conditions in the U.K. and the renewed fears of tough lockdown measures become the key factor that kept the lid on any further gains in the currency pair.

As we already mentioned, the GBP/USD currency pair witnessed some instant progress over the last hours after the European Union (E.U.) and the U.K. policymakers showed a willingness to extend Brexit talks. As per the latest report, the E.U.’s chief negotiator Michael Barnier said he is ready for Brexit talks “until last possible day” while his British counterpart blamed the regional leaders for the prevailing impasse the Brexit deal. These positive headlines instantly underpinned the British Pound and pushed the currency pair higher.

In the meantime, the U.K. Foreign Secretary Dominic Raab said in response to the E.U.’s ultimatum of deciding on the Brexit fate that the “We are disappointed and surprised by the European Union (E.U.) position on Brexit,” He further added that “We are close to a deal.” Hence the Raab’s latest optimism about the Brexit deal helped the currency pair to stay bid.

Despite the rising number of COVID-19 cases and the U.S. Congress’ lack of progress towards passing the latest stimulus measures ahead of the November 3 presidential election, the broad-based U.S. dollar failed to put any heaven bids and remain depressed on the day, possibly due to the doubts over the U.S. economic recovery, which tend to undermine the greenback. The losses in the U.S. dollar becomes the key factor that helps the currency pair.

On the contrary, the COVID-19 cases in the U.K. and Europe getting worse day by day as the daily counts reached closer to the 20,000 threshold, 18,980 new cases, 138 deaths marked in the latest report. Considering the virus’s current condition spreading, the opposition Labour Party ordered the national lockdown for at least two weeks. Apart from the USK, the U.S. cases of the novel coronavirus crossed 8 million so far, rising by 1 million in less than a month, as another wave in cases hits the nation at the onset of cooler weather.

The traders will keep their eyes on September month’s Retail Sales and Michigan Consumer Confidence for October. Meanwhile, the USD moves and coronavirus headlines will also closely followed as they could play a key role in the crude oil.