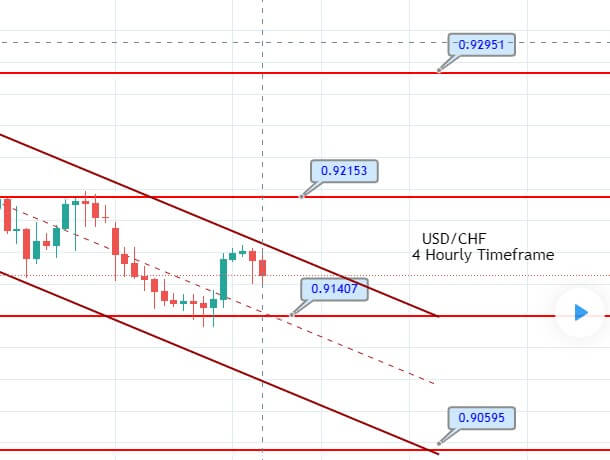 During the Wednesday’s Asian trading hours, the USD/JPY currency pair failed to stop its previous sessU.S.n bearish trend and took further offers below the 0.9170 level. However, the reason for the bearish tone around the currency pair could be associated with the broad-based U.S. dollar weakness, triggered by the renewed concerns about the already shaky U.S. economic recovery.

The market trading sentiment remained supported by reports suggesting that the U.S. President Trump showed a willingness to pass $25 billion for Airline Payroll Support and $135 billion for small businesses for the Paycheck Protection Program. The U.S. positive data provided a fresh boost to the market’s risk sentiment and trimmed the U.S. dollar’s safe-haven bids.

However, the optimism around the equity market was unaffected by U.S. President Donald Trump’s decision to cancel the talks with Democrats on theU.S.conomic stimulus package to boost the coronavirus-hit economy. It is worth recalling that the theU.S. President Donald Trump canceled talks with Democrats over the stimulus package, which raised doubts about the U.S. economic recovery. This, in turn, led in no small fallU.S.n the U.S. equity markets on Tuesday, but the reaction turned out to be short-lived.

As a result of the upbeat markeU.S.sentiment, the broad-based U.S. dollar failed to gain any positiU.S. traction during the European trading session. Besides, the losses could be associated with the renewed concerns about the already shakyU.S.S economic recovery, which also undermine the broad-based U.S. dollar. However, the U.S. dollar losses became the key factor that kept the currency pair under pressure. U.S.ereas, the U.S. Dollar Index, which tracks the greenback U.S.ainst a basket of six other currenciU.S., was up 0.1% at 93.737.

Looking forward, the market traders keeping their eyes on theU.S. Chair Jerome Powell’s scheduled speech. In the meantime, the updates surrounding the fresh Sino-US tussle, as well as the coronavirus (COVID-19), could not lose their importance.

The USD/CHF pair is trading with a bearish bias at 0.9165 level, forming a downward channel on the 4-hour timeframe. On the lower side, the bearish trend continuation is likely to drive the selling trend until the 0.9140 support level. At the same time, the MACD is also forming smaller histograms than before, suggesting selling bias in the market. Here’s a quick trade plan…