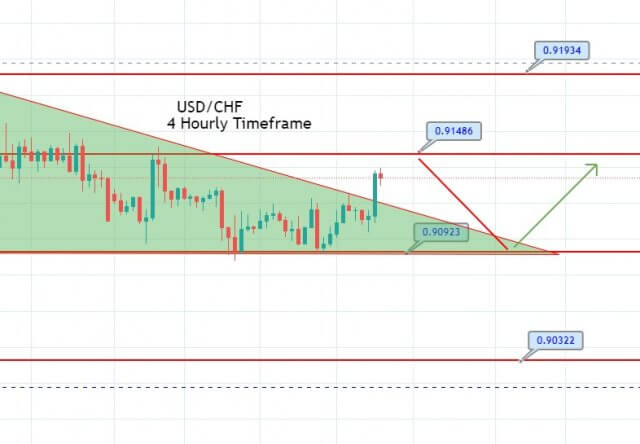 The USD/CHF failed to stop its overnight losing streak and remain depressed around just above the 0.9100 level mainly due to the worsening coronavirus (COVID-19) woes in the U.S., Europe, and some of the notable Asian nations like Japan, which eventually exerted downside pressure on the market trading sentiment and contributed to the currency pair losses.

Apart from this, the geopolitical tensions between China and some notable countries like the U.S. added a burden around the equity market. Thereby, the risk-off market sentiment underpins the safe-haven Swiss franc and contributes to the currency pair losses. Conversely, the broad-based U.S. dollar strength, backed by the market risk-off tone, has become the key factor that kept the lid on any additional losses in the currency pair.

In the meantime, the fresh optimism over Brexit talks and the positive news about vaccine progress help the market trading sentiment limit its deeper losses, which might provide some support to the currency pair. As of writing, the USD/CHF currency pair is currently trading at 0.9109 and consolidating in the range between 0.9104 – 0.9126.

Despite the renewed optimism over the possible vaccine for the highly infectious coronavirus disease, the market trading sentiment failed to extend its overnight positive performance. It started to flash red during the Asian session on the day, possibly due to the combination of factors. Be it the worrisome headlines concerning the US-China tussle or the resurgence of COVID-19 new cases in the U.S., Europe, and Japan; everything has been weighing on the market trading sentiment. This, in turn, provided a boost to the safe-haven Swiss Franc and exerted some additional pressure on the currency pair.

As per the latest Johns Hopkins University report, the global cases crossed 56 million figures, of which 11.5 million are in the U.S., along with nearly 250,000 deaths, nearly one-fifth of total global deaths. Not only from the U.S. but Tokyo also alarmed investors. As in result, New York restricts personal presence at the schools while Japan alarmed alerts in the capital after the daily cases rise crosses 500 on November 16. It is worth mentioning that Japan’s COVID-19 cases raised past-2,000 for the first time since the virus outbreak began. At the same time, Germany reported 22,609 new coronavirus infections, the 3rd-highest daily hike on record. Two hundred fifty-one deaths were recorded, as the total fatalities reached 13,370 so far.

Considering the current condition of virus spreading, Poland is also thinking about imposing a nationwide lockdown while major European economies, including France, Italy, Spain, and the U.K., are already under lockdowns. This, in turn, exerted downside pressure on the market risk tone and contributed to currency pair gains.

As in result, the broad-based U.S. dollar managed to keep its gains throughout the Asian session as the traders are still cheering the risk-off marker mood. However, the U.S. dollar bullish bias was rather unaffected by the worsening coronavirus (COVID-19) conditions in the U.S. or the US COVID-19 aid package delay. However, the U.S. dollar gains turned out to be one of the leading factors that help the currency pair limit its deeper losses. Simultaneously, the U.S. Dollar Index that tracks the greenback against a bucket of other currencies rose to 92.448.

Looking forward, the traders will keep their eyes on U.S. Unemployment Claims along with Philly Fed Manufacturing Index. In the meantime. The release of Trade Balance will be key to watch. Across the pond, the ongoing drama surrounding the US-China relations and updates about the U.S. stimulus package will not lose their importance.

The USD/CHF has violated the descending triangle pattern, extending resistance at 0.9148 level. Previously, the USD/CHF was extending resistance at the 0.9120 level, and since this level has already been violated, we may have further upward movement until 0.9150 and 0.9199 level. The MACD is also supporting the buying trend; therefore, we can try to capture a quick buy trade over the 0.9110 level today. Good luck!