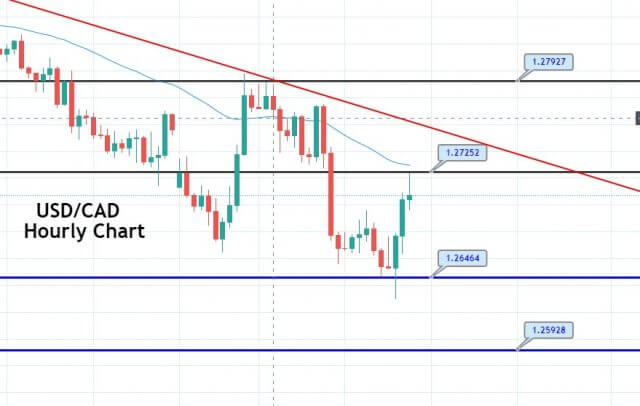 The USD/CAD pair was closed at 1.26689 after placing a high of 1.27909 and a low of 1.26556. The currency pair USD/CAD fell to its lowest since 2018 April on rising crude oil prices and the US dollar weakness. Despite Canada’s negative economic data and positive data from the US side, the currency pair USD/CAD still moved in the downward direction on Tuesday as investors’ focus was shifted on the OPEC meeting and Georgia’s runoff elections.

The West Texas Intermediate (WTI) crude oil prices rose above $50 per barrel on Tuesday as Russia and the Organization of Petroleum Exporting Countries remained deadlocked over how much oil to produce from February. Russia and its neighbor Kazakhstan were both pressuring for the scheduled output increase of 500,000 barrels a day to come into effect, while OPEC, with what appears to be total unanimity, wanted to kept output at its present level due to short-term weakness in demand caused by the latest surge in coronavirus and imposed lockdowns in various countries.

The rising prices of crude oil gave strength to the commodity-linked currency Loonie and added weight on the currency pair USD/CAD. Meanwhile, Georgia’s runoff elections that will decide the US Senate’s future also kept the US dollar under pressure on Tuesday. The result of the elections is expected to announce on Wednesday, and investors were cautious ahead of it, and the selling pressure surrounding the greenback increased that ultimately weighed on the USD/CAD pair.

The USD/CAD’s technical side is trading at 1.2690, disrupting the support area of 1.2725 level, which is now working as a resistance for the USD/CAD pair. On the lower side, the support stays at the 1.2647 level, and a bearish breakout of this level can extend selling trend until 1.2591. Let’s wait for opening a sell trade below the 1.2725 level today. Good luck!