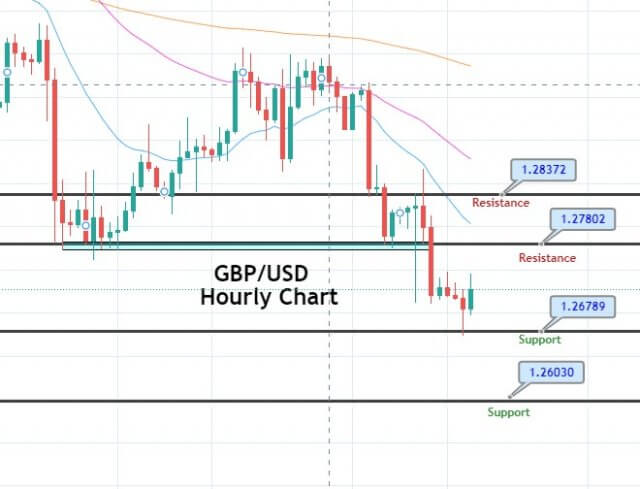 The GBP/USD currency pair extended its previous day losing streak and hit the multi weeks low near below the 1.2700 level. The GBP/USD hit a multi-day low the previous day after the Bank of England (BOE) Governor Andrew Bailey delivered downbeat comments and UK PM Boris Johnson announced activity restrictions to control the coronavirus (COVID-19) resurgence risk. Apart from this, the losses in the currency pair were further bolstered by the reports suggesting that the U.K.’s virus-lead deaths raised to a 2-month high, which fueled the worries about the U.K. economic recovery and undermined the GBP currency.

At the data front, the U.S. data showed that existing home sales rose to 6 million in August, the highest level in nearly 14 years. Moreover, the market risk sentiment was further bolstered by the Fed Chair Jerome Powell’s measured comments. He said on Tuesday that it might be possible for the Fed to raise interest rates before inflation starts to average 2%.

As a result, the broad-based U.S. dollar succeeded in maintaining its positive traction and remaining bullish on the day amid upbeat U.S. data and pullback in technology shares. However, the U.S. dollar gains seem rather unaffected by the upbeat market tone and held its gaining streak, at least for now. Thus, the U.S. dollar gains could be considered the major factor that kept the currency pair under pressure.

Additionally, weighing on the quote could be the BOE Governor Bailey’s statement, which raised concerns over the economic instability even before the activity restrictions, which increased courtesy to the watch today’s preliminary readings of September month PMI numbers. At the Brexit front, the discussions need a push on fisheries and less noise over the Internal Market Bill (IMB) to break the deadlock in talks. However, the U.K. parliament recently agreed to have a say over whether the IMB will break the Brexit Withdrawal Agreement Bill or not; if yes, it must not harm Northern Ireland.


The GBP/USD traded sharply bearish at 1.2678 support level, having violated the upward channel on the hourly chart. The already violated triple bottom level of 1.2780 is likely to keep the GBP/USD pair under pressure, below this pair can drop towards 1.2678 and 1.2603 level. On the higher side, the Sterling may drive upward movement until the 1.2780 level. We have already closed signal at profit and now we will be waiting a bit to capture next one.