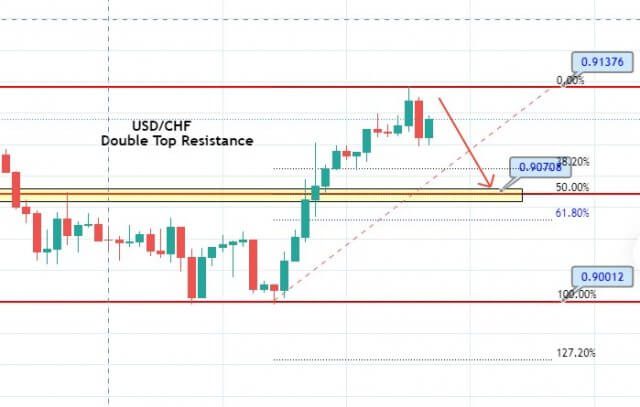 Today in the early European trading session, the USD/CHF currency pair successfully stopped its previous day bearish moves and hit the 1-1/2-week high level around the 0.9135 level in the last hour. However, the combination of factors helped the currency pair to gain positive traction for the 2nd-consecutive session on the day. The broad-based US dollar strength (supported by the US data’s upbeat release showed that the manufacturing sector activity boosted to a 2-year high in August) could be considered the key factor in supporting the currency pair.

On the other hand, the prevalent risk-on market mood, backed by the multiple factors, undermined the safe-haven Swiss franc and contributed to the USD/CHF currency pair gains. On the contrary, the US aid package’s uncertainty keeps challenging the risk-on tone, which could drag the currency pair down by underpinning the safe-haven demand in the market. Currently, the USD/CHF currency pair is currently trading at 0.9103 and consolidating in the range between 0.9089 – 0.9137.

The broad-based US dollar at the USD front managed to keep its gains throughout the Asian session as the traders still cheering the Upbeat US data. However, the US dollar gains seem rather unaffected by the upbeat market tone and held its gaining streak, at least for now. Thus, the US dollar’s modest gains could be considered the major factor that kept the currency pair higher. Whereas, the dollar index (=USD) rose by 0.16% at 92.390, having hit its lowest since April 2018 of 91.737. However, probabilities that the Fed would keep interest rates lower for longer periods could cap the further gains in the US dollar by holding the USD bulls from placing aggressive bets.

Apart from this, the upbeat market sentiment was being supported by the hopes of the coronavirus (COVID-19) vaccine. The pharmaceutical companies worldwide are going to start their final tests with one of the top candidates developed by AstraZeneca beginning its trials starting from today. This, in turn, boosted the market trading sentiment and extended support to the currency pair.

On the negative side, the on-going conflict between the world’s two largest economies still does not show any sign of slowing down as both nations do not refrain from delivering an aggressive statement. However, the latest US Secretary of State Mike Pompeo’s latest comments further heated the relation, which could be considered the key factor that capped further upside momentum in the currency pair.

The traders will also keep their eyes on the US ADP Employment Change for August, which is expected 950K against 167K prior. Across the pond, the major comments from BoJ’s Wakatabe will be key to watch.