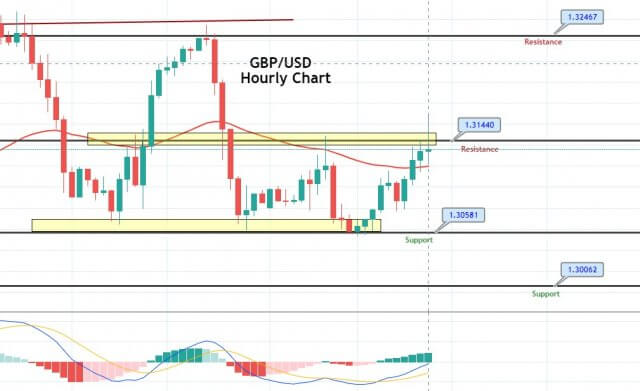 The GBP/USD managed to extend its early-day gains and drew some bids on the day essentially due to the broad-based U.S. dollar instability, triggered by the market upbeat trading sentiment. Besides this, the long-lasting deadlock surrounding the much-awaited U.S. fiscal stimulus also weighed on the safe-haven U.S. dollar and contributed to the currency pair gains. On the contrary, the long-term Brexit woes became the key factor that kept the lid on any additional gains in the currency pair. Also, the Brexit fears overshadowed British business houses’ optimism, as shown by the government data. At this particular time, the GBP/USD currency pair is currently trading at 1.3085 and consolidating in the range between 1.3054 – 1.3115.

The coronavirus vaccine hopes were supporting the market trading sentiment. The U.S. Food & Drug Administration (FDA) authorized the use of blood plasma from recovered patients as a treatment option, which eventually overshadowed the fears of rising coronavirus cases in Asia and Europe. Apart from this, the Moderna (NASDAQ: MRNA) ‘s press release on Monday, saying that the Cambridge, MA-based company is in “advanced exploratory discussions with the E.U. Commission to supply 80 million doses of mRNA-1273, Moderna’s vaccine candidate against COVID-19, as part of the European Commission’s goal to ensure early access to safe and effective COVID-19 vaccines for Europe.”

At the US-China front, the latest remarks between the U.S. and Chinese trade representatives refreshing optimism surrounding the phase one trade deal. The Dragon Nation recently confirmed that the trade deal between the US-China remains intact. He further added that China and the U.S. had a constructive conversation on the trade agreement. As per the keywords, “China says both sides agreed to continue pushing forward implementation of phase 1 trade deal.” This, in turn, underpinned the market sentiment and sent the U.S. dollar down. Also, supporting the market trading sentiment could be the news that the virus cases in Florida and the U.K. are receding off-late.

On the other hand, the market did not give any major attention to the American health official’s warning to Trump administration’s rush for coronavirus (COVID-19) vaccine. It s worth reporting that Dr. Anthony Fauci, the head of the U.S. National Institute of Allergy and Infectious Diseases, told yesterday that rushing out vaccines could undermine trials of other promising candidates.

At the Brexit front, the fears of the no-deal Brexit were further fueled after the failure of the 7th round to reach any agreements by the European Union (E.U.) and the U.K.’s policymaker. Whereas, both parties EU-UK are alleged to each other for the failure. Thus these fears become the key factor that capped further upside in the currency pair.

The losses in the U.S. dollar could also be attributed to the uptick in the U.S. stock futures. Whereas, the U.S. dollar index that tracks the greenback against a basket of other currencies dropped by 0.11% to 93.207 by 9:48 PM ET (2:48 AM GM


Moving ahead, the market traders will keep their eyes on the U.S. Federal Reserve Chairman Jerome Powell’s speech at the Jackson Hole symposium, which is scheduled to open on Thursday. The U.S. August consumer confidence is due later in the day and will be key to watch. In the meantime, the USD moves and coronavirus headlines will also closely followed as they could play a key role in the gold run-up.

The GBP/USD pair is trading at 1.3138, holding right below a double top resistance level of 1.3144. We decided to take a selling trade below 1.3144 level, but unfortunately, the pair spiked sharply to test a high of 1.3170 level, which hit our stop loss. But right after hitting our stop loss, the Cable again reversed to trade below 1.3144. The GBP/USD is still holding below 1.3144, but the pair is forming bullish candles so that we may have a bullish trend continuation in the market. Let’s wait for a proper setup. Good luck!