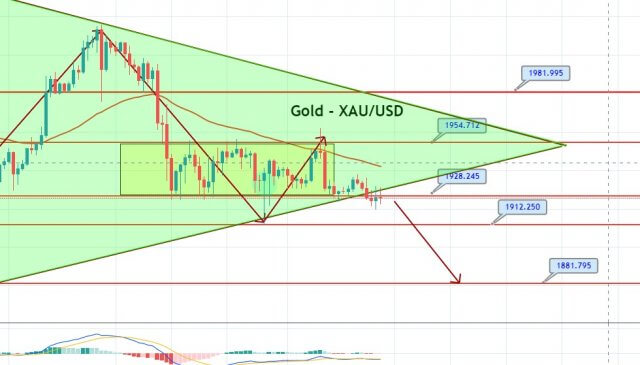 The yellow metal prices succeeded in stopping its previous day declines and started to gain some bullish bias near above 1,935 level on the day. However, the gold prices have nothing major to cheer on the day except U.S. dollar weakness. The investor turned to the safe-haven metal as the dollar dropped, and COVID-19 worries increased.

The upbeat market sentiment, backed by optimism over U.S. authorization of a blood plasma treatment for Covid-19, turned out to be a major factor that cap further upside in the gold. Elsewhere, the reason behind the upbeat market sentiment could also be associated with the overnight optimism over the US-China’ constructive’ talks on phase one trade agreement, which eventually dulled gold’s safe-haven appeal.

On the contrary, the lack of progress over the next round of the U.S. fiscal stimulus measures and the coronavirus (COVID-19) prevalence grab major attention and keep challenging the risk-on market sentiment, which might provide some support to the gold. At the press, the yellow metal prices are currently trading at 1,933.55 and consolidating in the range between 1,926.68 and 1,937.62. Moving on, the traders seem cautious to place any strong position as all eyes are now on Thursday’s Jackson Hole symposium.

Apart from this, the market trading sentiment was further bolstered by fresh optimism over the US-China’ constructive’ talks on phase one trade agreement. The Dragon Nation recently confirmed that China and the U.S. had a constructive conversation on the trade agreement. As per the keywords, “China says both sides agreed to continue pushing forward implementation of phase 1 trade deal.” However, these updates are positive for risk sentiment and might weigh on the safe-haven assets like gold.

Across the pond, the lingering uncertainty over the next round of the U.S. fiscal stimulus measures also supported the risk aversion. As we know, the U.S. policymakers have not yet confirmed the restart of negotiation related to the COVID-19 aid package. However, the hurdles over the package were intensified further after the House Speaker Nancy Pelosi took a U-turn from her previous readiness to cut the demands in half. On the flip side, the on-going tussle between US-China and India’s phasing out of Huawei equipment to cite the Sino-American tension turned out to be the major factor that helped the gold prices to maintain its bullish bias on the day.

As a result of risk-on market sentiment, the broad-based U.S. dollar failed to gain any bids and took the offers on the day as doubts persist over the global economic recovery from COVID-19 ahead of Fed Chairman Jerome Powell speech at Thursday’s Jackson Hole symposium themed. As well as, the risk-on market sentiment also weighed on the American currency. However, the U.S. dollar losses helped the gold prices to deeper its losses as the price of gold is inversely related to the price of the U.S. dollar. Whereas, the U.S. dollar index that tracks the greenback against a basket of other currencies edged down 0.11% to 93.207 by 9:48 PM ET (2:48 AM GMT).

Moving ahead, the market traders will keep their eyes on the U.S. Federal Reserve Chairman Jerome Powell’s speech at the Jackson Hole symposium, which is scheduled to open on Thursday. The U.S. August consumer confidence, which is due later in the day and will be key to watch. In the meantime, the USD moves and coronavirus headlines will also closely followed as they could play a key role in the gold run-up.


Technically, the precious metal gold has violated the symmetric triangle pattern at 1,928 level, and below this, we tried to capture quick sellings twice and were able to capture quick green pips in both of the trades.

We have finally closed two winning signals in gold, but we had to come out of the market a bit early as the precious metal isn’t continuing with the selling trend. Anyway, we will still be looking to enter a selling trade below 1,928 level to target 1,911 and even further lower. Good luck!