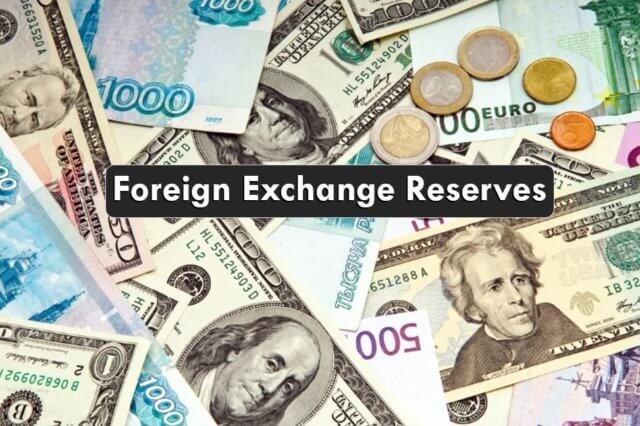 Foreign Exchange Reserves are foreign assets held by a country’s central bank. Most of the foreign reserves are held in the form of currencies, while the other reserves include deposits, bonds, treasury bills, other government securities. There are plenty of reasons why central banks hold reserves. And the most important reason is to control their currencies’ values. The reserves act as a backup for their liability. From an economic point of view, it essentially influences the monetary policy.

When a country’s currency falls considerably, the foreign exchange reserve acts as a backup of their economy. Typically, countries hold the US dollar as their forex reserves because it is the most traded currency in the world. Apart from that, the Great Britain Pound, Chinese Yuan, Euro region’s Euro, and Japanese Yen are the currencies that are held as FX reserves.

Let us understand with an example, how exactly are the forex reserves accumulated.

Consider two countries, the United States and Great Britain Pound. In the present situation, let’s say the value of USD and the GBP is the same with stable economies. Now let’s say the investors start believing that the USD is going to perform exceptionally well in the coming years. So, they begin flowing in cash into the US’s real estate and the stock market. This brings up a massive demand in the US dollar, while supply in Pound.

In such a situation, people must pay more Pounds to purchase one US Dollar. Or in USD’s perspective, people must pay lesser US dollars to buy one Pound. Moving further, let’s say the US does not want its currency to get very strong. This is because it has led to high volatility in the price and dramatic moves in the market.

With this concern, the central banks start printing more of their currency (US Dollar). And this money is deployed into buying the GBP. In doing so, the supply and demand of both the currencies stabilize again. Now the Pounds that the US central banks own are the foreign reserves. This hence appears on the balance sheet of the US.

What is the Purpose of Foreign Exchange Reserves?

There are several ways central banks use FX reserves for different purposes.

The countries use their foreign reserves to keep their currency’s value at a fixed rate. An example of the same is given above. Countries with a floating exchange rate system use FX reserves to keep the value of their currency less than the US dollar. For example, Japan follows a floating system. The central bank of Japan buys US treasury so that the Yen stays below the Dollar.

Another critical function of the reserves is to maintain liquidity in case of economic crises. For instance, a natural calamity might bring a halt to local exporter’s ability to produce goods. This cuts off their supply of foreign currency to pay for imports. In such scenarios, central banks can get their local currencies in exchange for the foreign currency they have. Hence, this allows them to pay for and receive imports.

The foreign currencies are supplied by the market to keep markets steady. It also buys the local currency to prevent inflation and support its value. Central banks provide confidence to investors through reserves. They assure their foreign investors that they’re ready to take action to protect investors’ investments. This will prevent the loss of capital for the country.

Some countries use their foreign reserves to fund sectors. For example, China has used its reserves for rebuilding some of its state-owned banks.

How Forex Reserves impact the currency?

Foreign exchange reserves are important to investors as it controls the supply and demand of the currency in the forex market. Knowing that central banks try keeping the currency values stabilized, we take advantage of this and try predicting the value of a currency pair.

Let’s say the US is buying large quantities of Australian goods, bonds, etc. This would create a demand in the Australian Dollar against the US dollar. That is, the value of AUD/USD would rise in doing so. Now, if the value rises to a significant amount, the central banks will buy back the US dollars from them, which creates a demand in the USD. And this hence will bring down the value of AUD/USD to keep it stable again. Therefore, traders can look to go short on AUD/USD knowing that USD would buy back their currency to keep both the currencies stable.

Traders and investors need the data of foreign exchange reserves to make their investments. And this data is publicly available for free. Below are the portals to access the reports on the Forex reserves of different countries. Apart from the current data, one can access the historical data with graphical charts as well.

From the above topics, it is evident that Foreign exchange reserves affect the currency of an economy. Now, we shall see how the price charts are affected when the reports are released. Typically, the impact of the news after its release is low. The Forex reserves of a country are released on a monthly basis and usually at the beginning of a moth. However, the source of the announcement is different for different countries.

For analysis, we will be considering the data released by Japan. The reports on the FX reserve is announced by the Ministry of Finance of Japan. Specifically, we will be considering the reserves that are held as USD. Consider the below report of Foreign exchange reserves (USD) held by Japan’s central bank. The news was announced on 5th March 2020. We can that the newly released data was higher than the previous month by 16.7B.

Below is the chart of USD/JPY on the 15min timeframe before the release of the news. Currently, the market is showing some strength from the buyers.

Below is the same chart, but after the release of the news. We can see that a green candle popped at first but was eaten up by a red candle. Basically, the up move was nullified by the sellers. Also, we cannot really say that the up and down move was due to the news because the volume didn’t show any sudden spike up. Typically, for impactful news, the volume increases drastically, which did not happen for this news. However, the volatility rose a little above the average but dropped below in a few minutes. One of the reasons we could account for the low volatility and volume is that the report was almost the same as the previous month’s report.

Consider the chart of EUR/JPY on the 15min timeframe given below. The news candle is marked by a rectangle around it. We can see that the price action of this pair is very similar to that of USD/JPY. Initially, the market showed a bullish move but dropped the next candle. Speaking of volatility, it was a pip or two above the average volatility. The Volume, too, did not increase during the announcement of the news, which usually happens for other impacting news. Hence, in this pair too, the FX reserves did not have an immediate impact on the currency pair.

Below is the chart of GBP/JPY on the 15min timeframe. Similar to the above two pairs, in this pair too, the price action is almost the same. In 30 mins after the release of the news, the market showed a little bullish but ended on a bearish note. The volatility at this time was at the average line, and the volume was feeble. In fact, it was lesser than the time when the London or New York market opens. Hence, with this, we can come to the conclusion that the impact of Foreign exchange reserves on GBP/JPY was insignificant.

Foreign exchange reserves are the assets of other countries held by the central bank of a country. The reasons for doing so are plenty. The Foreign Exchange Reserves has its influence in determining the monetary policy. FX reserves can control the rate of a currency and can use to stabilize the same.

However, if we were to see its immediate impact on the price charts, it is low. The impact on the currency pair is usually when it is significantly overvalued or undervalued. FX reserves are also helpful to central banks in bringing up the economy to an extent. This indicator may not predict the future economy but can help economists in several other ways.

That’s about Foreign Exchange Reserves and their impact on the price charts. If you have any questions, let us know in the comments below. Cheers!