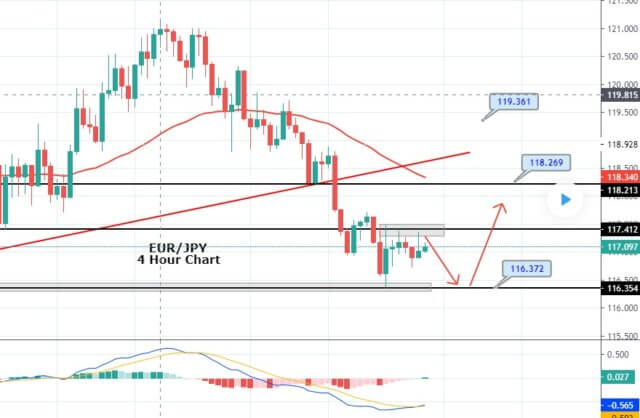 The EUR/JPY is trading at 117.150, holding mostly below a strong resistance level of 117.350, which is extended by the double top pattern. On the 4 hour timeframe, EUR/JPY may find a hard time breaking above 117.350 resistance due to an increased level of uncertainty and safe-haven appeal in the market. Alongside, a series of weaker than expected services PMI figures from the Eurozone may weigh on the EUR/JPY currency pair.

Fundamentally, the EUR/JPY may face bearish pressure due to weakness in the single currency euro. The Markit Eurozone Composite Output Index reported its biggest ever monthly drop in March to place a survey’s historic low of 29.7. Well, the figure isn’t just below the previous month’s 51.6 figure, but it also missed the economist’s forecast of 31.6, which is likely to drive sharp selling in Euro.


Technically, the EUR/JPY is following a narrow range, which is extending selling bias below 117.450 and bull 116.350. The MACD is still holding around 0, suggesting neutral bias among traders. While the 50 periods EMA continues to support the selling trend in the pair. Today, the bullish breakout of 107.450/650 level may lead the EUR/JPY prices towards 118.300 level. Conversely, a bearish breakout of 116.900 level can drive selling until 116 and 115.