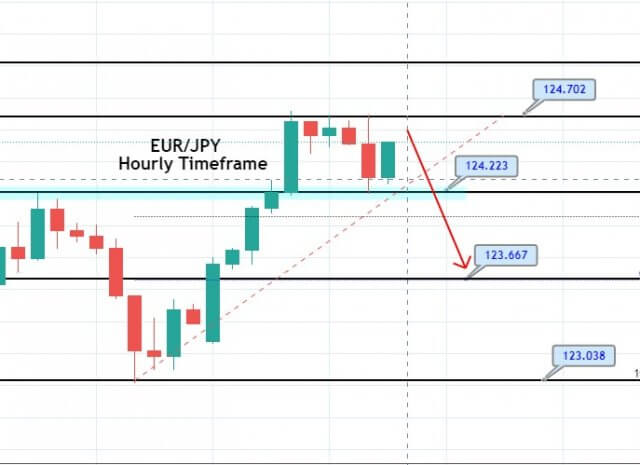 The EUR/JPY currency pair extended its Asian session declining streak and remain depressed around below 124.50 level mainly due to the cautious mood around the equity markets, which tend to underpin the Japanese yen’s safe-haven demand and turned out to be the key factor that exerting some pressure on the EUR/JPY currency pair. Apart from this, the latest optimism over the US-Japan relationship provided further support to the Japanese yen, which add further pessimism around the currency pair.

On the contrary, the better-than-forecasts German Factory Orders data and positive comments from the ECB policymakers over the EUR economy help the currency pair to limit its deeper losses. As of writing, the EUR/JPY currency pair is currently trading at 1.1780 and consolidating in the range between 1.1766 – 1.1802.

As we already mentioned, the German Factory Orders improved more-than-expected in August, suggesting that the manufacturing sector recovery in Europe’s largest economy is regaining traction. This, in turn, underpinned the shard currency and becomes the key factor that kept the lid on any additional losses in the currency pair. At the data front, the Contracts for goods’ Made in Germany’ came in at +4.5% on the month vs. +2.6% expected and +2.8% last, as per the latest data showed by the Federal Statistics Office showed on the day. Annually, Germany’s Industrial Orders dropped only by 2.2% in the reported month vs. -7.3% previous and -19.9% expectations.

On the contrary, the cautious mood around the equity markets, triggered by the US political uncertainty ahead of the presidential election on November 3, tends to underpin the Japanese yen’s safe-haven demand and becomes one of the key factors that kept the currency pair under pressure. However, the overnight optimism over the US President Donald Trump’s return to the White House recently overshadowed by the prevalent US political uncertainty. In the meantime, the hopes of a compromise over a new coronavirus relief package also failed to boost trading’ sentiment, which is not good for the currency pair.

At the US-China front, the renewed US-China tussle also keeps challenging the market risk mood, which might add further pessimism around the currency pair. As per the latest report, the Dragon Nation continuing criticizing the US ban on TikTok and WeChat at the World Trade Organization (WTO).

Across the pond, the losses in the currency pair were further bolstered after the US Secretary of State Mike Pompeo said that Japan’s Prime Minister (PM) Yoshihide Suga would strengthen the relationship with the US, which in turn, Japanese yen got impressed and added further downside pressure around the EUR/JPY currency pair.


Technically, the EUR/JPY pair is trading bearish today at 124.200 level, holding over the 38.2% Fibonacci retracement level. Recently, the EUR/JPY formed a bearish engulfing pattern on the 4-hour timeframe that may lead the pair towards 124.055 level. The candle’s closing below 124.055 level may extend the selling trend until the 61.8% Fibonacci retracement level of 123.66. But in case, if the EUR/JPY pair reverses and breaks the resistance level of 124.700 level, then I will consider closing the signal in the loss. Let’s keep an eye on it.