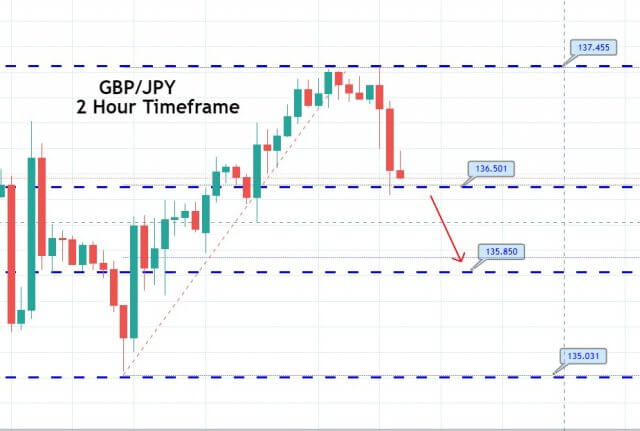 GBP/JPY on a Bearish Run – 61.8% Fibonacci Retracement in Play!

The GBP/JPY pair failed to keep its early-day bullish momentum and dropped well below the 137 level despite the upbeat market sentiment. However, the prevalent bearish sentiment around the currency pair could be associated with U.K. Housing Equity Withdrawal q/q figures, which fell from -4.5B to -7.7B mark, missing the economists forecast of -4.3B.

Besides this, the currency pair’s declines were further bolstered after the U.S. Secretary of State Mike Pompeo said Japan’s Prime Minister (PM) Yoshihide Suga would strengthen the relationship with the U.S. Thus, the Japanese yen got impressed by the above comments, which adds further downside pressure around the GBP/JPY currency pair. On the contrary, the market upbeat mood, backed by optimism over US President Trump’s health, could be considered one of the key factors that help the currency pair limit its deeper losses.

At the US-China front, the renewed US-China tussle also keeps challenging the market risk-on mood, which might add further pessimism around the currency pair. As per the latest report, the Dragon Nation recently fueled the Sino-American tussle by criticizing the US ban on TikTok and WeChat at the World Trade Organization (WTO).

Across the ocean, the currency pair losses got an additional boost after the US Secretary of State Mike Pompeo said Japan’s Prime Minister (PM) Yoshihide Suga is a ‘powerful force for good’, as well as Pompeo further added that he believes Suga will strengthen the relationship with the US.

These positive comments tend to underpin the Japanese yen currency and drag the currency pair lower.

The GBP/JPY has formed a sharp bearish a candle below 137.450 resistance area. Closing of candles below this leve suggests odds of a selling bias in the market, especially when the MACD has also formed a bearish crossover


Doji candle over a resistance become support level of 1.3245, which signifies weakness in the selling bias. Simultaneously, the USD/CAD’s MACD is forming smaller histograms than before, and it’s an indication of a potential bullish bais. On the lower side, the GBP/JPY pair may drop until 136.500 that marks 38.2% Fibonacci retracement level and even below this until 61.8% Fibo level of 135.940 level. Good luck!