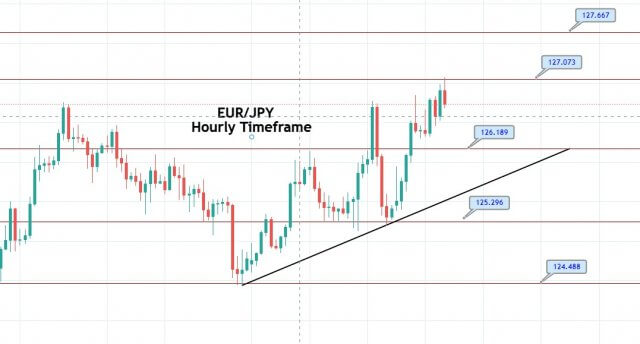 The EUR/JPY is trading at 126.700 level, reversing below an immediate resistance level of 127.073. The closing of candles below 127 level is likely to drop until 126.450 level. The single currency Euro could be the reports that suggested that Germany avoided a sub-zero inflation print in August despite the negative base effect from low energy prices and VAT cut, which eventually gave support to the shared currency.

On the contrary, the number of coronavirus cases increased to 242,381, while the total number of deaths reached 9,298. Whereas, the cases rose by 610 in Germany yesterday as per the German disease and epidemic control center, Robert Koch Institute (RKI) report. The coronavirus fears could be considered the key factor that cap further upside momentum for the currency pair.

Across the ocean, the on-going Japanese political uncertainty failed to give any major support to the currency, at least for now. Japan’s ruling Liberal Democratic Party (LDP) General Council Chairman Shunichi Suzuki stated that leadership would be conducted in a simplified rather than full-scale format respecting the urgency. This looming uncertainty initially weighed on the Japanese yen currency and gave some support to the major, but the support was short-lived as the US dollar continues losing its ground and becomes the major factor that keeps the currency pair down.


We opened a buy trade in the EUR/JPY currency pair at 126.94 with a stop loss of 127.34 and take a profit of 126.54. But the recent Doji candles below 127 level may cause a bearish reversal. Therefore, we decided to close the trade a bit early before it reverses the other way. Anyways, we can look for buying trade again around 126.250 level. Stay tuned, good luck!