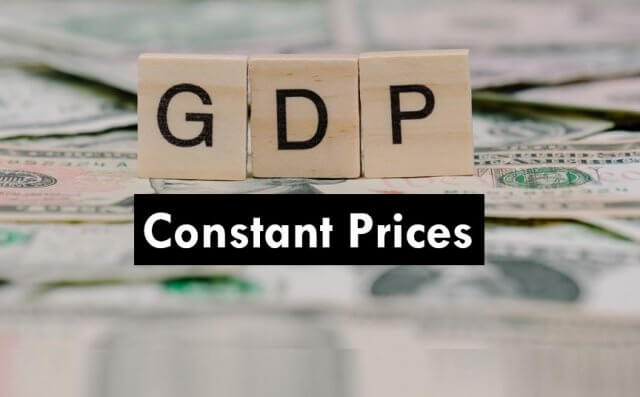 It is a national level indicator and is closely watched by the market. The most important fundamental indicator Real GDP Growth Rate is derived from GDP Constant Prices. Hence, overall it is very critical for us to understand GDP Constant Prices and its nuances for correct interpretation.

What is GDP Constant Prices Indicator?

Nominal GDP is also called Current Dollar GDP. It is the market value of all the finished goods and services within a nation’s geographical borders for a given period. The period is generally a quarter (3 months) or a year.

The commonly used term “size of the economy” refers to this economic indicator. USA has the world’s biggest economy, which means it has the highest nominal GDP or highest economic output.

It is the inflation-adjusted GDP value. It is the total monetary value of all goods and services produced, excluding the effects of inflation in prices. It is also called Real GDP, Constant Dollar GDP, Inflation-Corrected GDP, or only Constant Prices. The raw value of the economic output is called the Nominal GDP, whereas Real GDP accounts for inflation effects and is a more accurate measure of growth.

GDP Constant Prices or Real GDP is obtained by dividing the Nominal GDP with a GDP deflator. The GDP deflator is an inflation measurement from a fixed base year. Real GDP is inflation-adjusted to compare on an as-if basis with the base year GDP. It means GDPs are compared as if the prices remained the same as the base year and see if the GDP has improved due to increased economic activity.

Calculating GDP Deflator is a bit tedious process, that is best left to the experts like the Bureau of Economic Analysis. The Real GDP is made up of the following components and is affected by them:

A) Consumer Spending: It represents spending associated with the end-consumers or the general population. It makes up about 69% of the total GDP in the United States.

B) Business Investment: Economic Output of the Business Sector makes up 18% of the total GDP in the United States.

C) Government Spending: It involves all the expenditures incurred by the Government to maintain and stimulate economic growth and run its operations. It accounts for 17% of the total economic output for the United States.

D) Net Exports: It is the difference between the total exports and imports. The United States has a -5% Net Exports of the total GDP, meaning it is a net importer.

How can the GDP Constant Prices numbers be used for analysis?

Nominal GDP is useful when comparing economic output within a year among different quarters, while it is more sensible to use Real GDP for year-over-year comparison. Policymakers use both Nominal and Constant Prices GDP for economic assessment and implementing policy reforms as deemed necessary.

GDP Constant Prices is better for assessing long-term growth, or knowing whether the economy has grown over the previous year or not. With Nominal GDP, it is difficult to tell whether an increase in the figures is due to an expanding economy or just a factor of inflating prices of goods and services.

GDP data is essential for almost everyone. Economists use for macroeconomic analysis and Central Bank planning. Policymakers are committed to maintaining a steady Real GDP Growth. Hence, Central Authorities also watch it tightly.

Investors make decisions based on GDP data. Businesses hold their expansion plans based on economic stability and market stability, as indicated by GDP. Traders heavily trade once GDP estimates and actual figures are published.

Hence, overall it is a high impact indicator. It is a proportional macroeconomic indicator, meaning higher GDP Constant Prices are suitable for the overall economy and currency. The opposite also holds.

Lower Real GDP prints indicate weakening economy, businesses hold hiring or investment plans, spending is reduced, and in extreme cases, it can lead to a recession. All of this leads to currency depreciation.

In the United States, the Bureau of Economic Analysis publishes quarterly and annual Nominal and Real GDP reports on its official website. It is released almost 30 days after a quarter ends. The schedule of release is available on the website. The headline number is the GDP Constant Prices figure, GDP Growth Rate figure.

For the United States, the BEA reports are available here

The St. Louis FRED keeps track of all the GDP and its related components in one place on its official website here:

The World Bank GDP Constant Prices with base year as 2010 in US Dollar terms are available here:

We can find a consolidated list of most countries’ GDP Constant Prices here.

GDP Constant Prices, also known as real GDP, is a measure of GDP that has been adjusted for the price level. Current prices measure the GDP using the actual prices we notice in the economy. Current prices make no adjustments for inflation. However, constant prices adjust to the effects of inflation. Using persistent prices enables us to measure the actual change in the outcome and not just rise due to inflation’s effects. The real GDP is calculated by dividing nominal GDP over a GDP deflator. When nominal is higher than real, inflation is occurring, and when real is higher than nominal, deflation is occurring. Fundamentally speaking, nominal GDP matters to investors when taking a position in currency or the stock market.

In today’s lesson, we will analyze the impact of GDP on various currency pairs by observing the change in volatility before and after the news announcement. For that purpose, we have collected the GDP data of Canada, where the below image shows the month-on-month GDP data released recently. Let us find out the market’s reaction to this data.

We will start with the USD/CAD currency pair to observe the impact of GDP on the Canadian dollar. The above image shows the state of the chart before the news announcement, where we see that the market is in a downtrend, and recently the price has reversed to the upside. Either could result in a reversal of the trend or a continuation of the current trend. The impact of GDP will decide the direction of the market and so our position.

After the news announcement, the price drops below the moving average, and the market falls considerably owing to the positive GDP data. Even though there was a decrease in the GDP, it was only a tad bit lower and much around the market expectations. Hence, it proved to be bullish for the Canadian dollar, and the market goes lower. One should confirm the continuation of the trend using technical indicators before taking a ‘short’ trade.

The above images represent the GBP/CAD currency pair, where we see in the first image that the market has broken out from a downward ‘channel’ and is moving higher and higher from then on. It very likely that the up move will continue further, which makes us wait for a price retracement to take a buy trade. Based on the volatility caused by the news release, we will have a clear idea about the direction of the market.

After the news announcement, volatility slightly increases to the downside, and the market falls by a few pips. The bearish ‘news candle’ is a consequence of the positive GDP data, mostly on expected lines. We need to note that the news release did not change the overall trend of the market, where the uptrend is still intact.

The above images are that of CAD/CHF currency pair, where we see that before the news announcement, the market has reversed from an uptrend to a downtrend and is currently on the verge of continuing the downward move. Since the GDP has a high impact on the currency (indicated by the red box), it is advised not to take any position before the news release.

After the news announcement, the price moves higher by a small amount and manages to close on a bullish mark. The GDP data was close to what was expected, it leads to bullishness within a currency, and hence the Canadian dollar gains strength for a short while.

We hope you understood the concept of ‘GDP Constant Prices’ and how the Forex price charts get affected after its news release. All the best. Cheers!