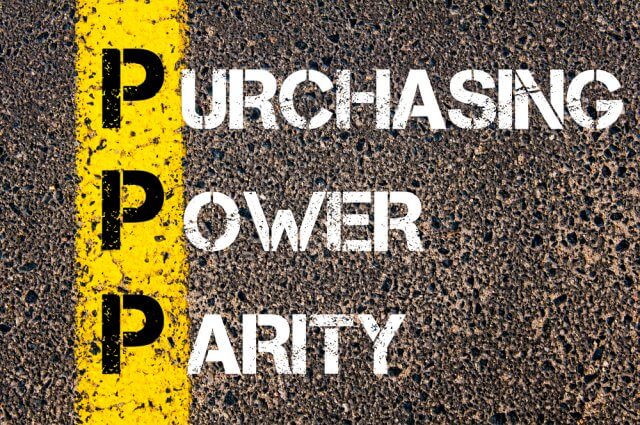 GDP and its related metrics are the most important economic indicators for macroeconomic analysis, especially for traders’ fundamental analysis. Hence, it is imperative to understand GDP per Capita PPP to better understand relative economic prosperity in the international market place.

What is GDP Per Capita PPP?

Gross Domestic Product helps in measuring a country’s total economic output. It is the total monetary value of all the goods and services produced within the country regardless of citizenship (resident or foreign national).

The commonly used term “size of the economy” refers to this economic indicator. The USA has the world’s largest economy, and it means it has the highest nominal GDP or highest economic output.

It is a metric obtained by dividing a country’s GDP by its population count. Here, “per Capita” translates to “per average head” or “for one individual.” Hence, GDP per Capita is the measure of economic output per person. It tells us how much economic output is attributed to a citizen. Hence, it is a measure of national wealth. On the other hand, it can also tell us the economic productivity of the people.

It measures how much a particular set of goods and services cost in each country, instead of the exchange rates that can be manipulated by speculative trading, or central authorities’ intervention.

A wide range of goods and services are taken into account to develop the PPP, and hence the process is complicated, but once generated, the PPP remains mostly constant in the long run.

If we want to compare GDP per Capita amongst countries, we use the Purchasing Power Parity (PPP). Through PPP measure, we can compare countries on equal terms, as many countries have different currencies, comparing economic output becomes difficult. Hence PPP measures everything in the United States dollar terms, thus creating a base standard for comparison.

How can the GDP per Capita PPP numbers be used for analysis?

Using nominal GDP values for economic growth comparisons would be misleading as currencies are often manipulated in favor of countries by the governing agencies. For example, China frequently devaluates currencies to increase their income through exports and offer their goods at a competitive price in the international markets.

Hence, using the GDP per Capita PPP is a more sensible approach as PPP values stay stable over more extended time frames and better understand and analyze economies with different currencies. The below table proves our above analysis.

It is important to understand we use PPP for making a fair comparison, but PPP is not perfect, it has the following limitations:

Taxes: Tax policies differ from country to country and consequently affects the price of goods and services, thereby making the PPP skewed.

Transportation: Goods need not be available across the planet at the same level. The import of goods from the manufacturing site would add to the prices of the goods differently to different countries.

Tariffs: Governments can intervene to impose tariff barriers for economic reasons like protecting domestic businesses, which may again impact the imported product prices, making it costlier in the concerned country.

Market Competition: Popularity in particular areas can give companies an edge and enable them to price higher than in other countries. Established reputation can change prices, which varies from its market presence duration. On the international scale, the popularity of a good is not the same across all economies and hence can skew prices.

All the above factors limit PPP in some ways, but PPP is still better than nominal GDP comparisons. So, GDP per Capita PPP may not be perfect, but currently, there is no better metric for economic prosperity comparisons amongst countries.

GDP metrics are used in a variety of ways by a variety of people. Economists and Central Authorities primarily use GDP per Capita PPP to understand its people’s economic wellbeing in contrast to other economies. GDP Growth Rate is primarily used by Traders, Business people, and Investors to make business decisions.

GDP per Capita PPP would likely be more useful for Policymakers, and Business people. Business people can use this as a wealth metric and consequently decide the products to suit the budget of people. The higher the wealth of the individual citizen, the costlier products and services they can afford. Hence, business decisions can also be impacted.

The PPP value can be used to base exchange rate fluctuations and identify signs of strengthening or weakening of currencies.

Sources of GDP per Capita PPP

We can find a consolidated list of the same here as well.

In the previous section of the article, we understood the definition of GDP based on PPP and how it is different from the nominal GDP. PPP based GDP is converted to international dollars using purchasing power parity rates and divided by the total population.

Purchasing Power Parity (PPP) between two countries, X and Y, is the ratio of several units from country X’s currency required to purchase in country X. The same quantity of an excellent/service as one unit of country Y’s currency will purchase in country Y. It can be used mostly to compare inflation in two and, to some extent, the economic growth. But the nominal GDP is one that taken into consideration while making investment decisions.

In today’s example, we will observe the impact of GDP on various currency pairs and witness the change in volatility due to the official news release. The below image shows the GDP in the Euro Zone during the fourth quarter, where we see the GDP was as in the previous quarter. Let us find out the reaction of the market.

We shall start with the EUR/USD currency pair to analyze the impact of GDP on the Euro. It is clear from the preceding illustration that the market is not trending in any direction, which means there is confusion concerning the market trend. Therefore, until we have clarity in the market, it is smart not to take any trade.

After the news announcement, the price gets volatile as it moves in both the directions and finally, closes near the opening price. The GDP data did not strengthen or weaken the currency where the ‘news candle’ closed, forming an indecision candlestick pattern. As the news release did not bring about any significant change to the currency pair, one should analyze the currency based on technical indicators.

The above images represent the EUR/JPY currency pair, where we see that the overall trend of the market is up, and recently it is has shown signs of reversal before the news announcement. One needs to wait for confirmation before taking a trade as the news event can cause significant changes to the existing chart pattern, resulting in an unnecessary loss. Until the price is below the moving average, the uptrend shall not continue.

After the news announcement, the price initially moves lower, but it gets immediately bought and closes with a wick on the bottom. There is some volatility seen, which eventually takes the market lower. The GDP data came out to be as expected, where it was the same as before. Since there was no improvement in the GDP, we can ascertain that it was negative for the currency.

The above images are that of EUR/AUD currency pair, where we see that before the news announcement, the market is in a strong downtrend, and currently, the price is on the verge of continuing the downward move. However, since a significant news announcement is due, there is a possibility that it can change the trend, hence need to take a position based on the impact of the news.

After the news announcement, market shoots up, and volatility increases to the upside. Here we see that the GDP data has a positive impact on the Euro, and the currency strengthens after the news release. Now it is clear that selling the currency pair is no longer valid.

We hope you understood all about the ‘GDP Per Capita PPP.’ Do let us know your thoughts in the comments below. Happy Trading!