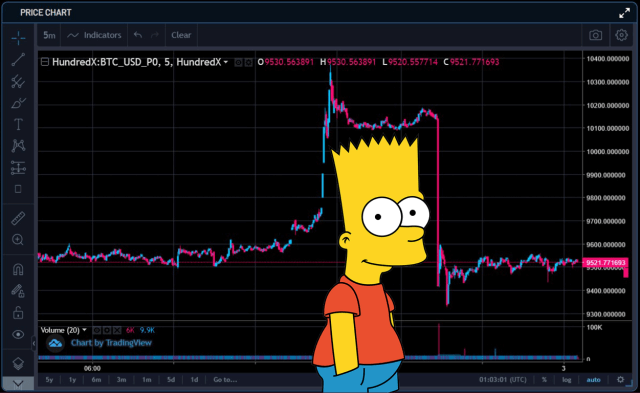 The 4-hour chart, during the period leading up to the drop, as well as the hourly, had formed what’s called the ”Bart Simpson” pattern. This pattern usually indicates probable manipulation caused by whales and institutional players. The pattern occurs when an asset rapidly shoots up or down,  followed by a sideways movement, then a violent move in the opposite direction.

This price action resembles the famous cartoon character Bart Simpson’s head. The name is one of many eccentric memes created by the crypto community.

The Bart Simpson pattern phenomenon made its debut in 2018 when the Bitcoin market became a bit subdued. Volume and liquidity began to decrease due to declining interest in the cryptocurrency.

Due to the current uncertain Bitcoin market (more on that later), the low liquidity and low volume trading environment create the perfect recipe for Bart Simpson charts to start appearing again.

The Bart patterns also sometimes appear in the inverse, with the zig-zag formation occurring at the bottom of a sudden price move before reversing back upward.

Bart Simpson patterns are somehow unique to the Bitcoin and crypto market. And although hilarious, they are a bad sign for the market. Ordinary investors and traders mostly get burned, while big players such as whales and institutional investors go home with huge profits.

What leads to the Bart Simpson Pattern?

There’s consensus in some quarters that the pattern occurs due to a lack of liquidity in the Bitcoin market.

After the 2017 bull run, big investors liquidated their positions, with the majority of them not returning to the market. This led to the price crashing from 5 digits to 4 digits. Pump-and-dump schemes also became commonplace, and whales could sway prices with big enough orders. Add this to the sometimes artificial prices caused by trading bots – which have become popular more than ever.

Do Bart Simpson Patterns Appear in the Traditional Finance Market?

The answer is yes, and no. Since early 2018, the cryptocurrency market started a downward trend. In January, the total crypto market capitalization was at an all-time peak of $800 billion. Through the following months, this steadily decreased. On October 23, 2018, 54% of the total market cap of the entire crypto market was Bitcoin’s. This is comparable to the market cap of companies such as McDonald’s and IBM. As you can see, it’s difficult to compare the traditional market with the crypto market, especially due to the mostly poor participants and emerging factors like regulation of the crypto market.

Also, a market where participants can make massive orders provides a fertile playground for price manipulation. In the crypto market, investors can enter such orders due to the lack of regulation. Also, there are looser thresholds for entering the crypto market. Plus, the execution of trades in the traditional markets is more rational and controlled. For instance, there are ‘circuit breakers’ and other mechanisms that put a halt to trading as soon as certain thresholds have been reached.

There’s also the existence, in the traditional market, of financial intermediaries that help traders achieve optimized trading that does not affect prices, avoiding Bart Simpson patterns.

Bitcoin ETFs: Events like these, together with similar ones, are partly why the Securities Exchange Commission refuses to approve Bitcoin ETFs. The truth is that the total market is still unstable and can be easily manipulated. In a way, the crypto market is the whales’ playground. They can send the prices up or down whenever they so wish.

Miners: Price manipulation that results in Bart Simpson patterns affects miners. When prices go down, profitability does too. The money they make might not be enough to cover their costs.

BitMex recorded the lowest drop, with the currency dropping to $8600. Bitstamp hit a low of  $9135. The majority of the lows were between $9350 – $9100. The dramatic difference in Bitmex could have been due to slippage and cascading liquidations. The crash caused $100 million long liquidations on the exchange.

This was the third time in recent months when buyers failed to take the price past the $10,500 mark. The crypto has struggled to break past the resistance level three times the past eight months.

After its failure to cross the same level for three consecutive times, Bitcoin’s investors and enthusiasts are asking themselves if the coin will break anytime soon. Many are wondering if BTC will initiate a bull trend and test even higher resistance levels of $11,500 and above. The question is even more pertinent when you consider the intensity of the falls, and how the market has shaped up generally in recent months.