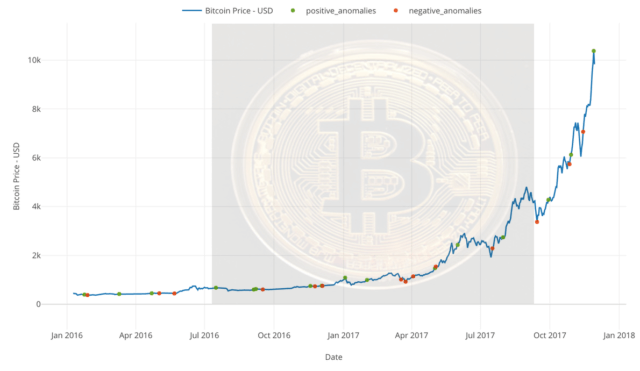 Towards the tail end of 2019, Bitcoin stagnated in the ranges of $7,000 to $8,000. However, at the beginning of this year, 2020, its price increased steadily to the highs of $9,443.96 and continued to show signs of strength. As the anticipation for even higher prices continues to grow, its quite clear that Bitcoin market was in a bull run, and perhaps will continue to be bullish for the better part of this year.

The projected bull run can be linked to the fact that the digital coin’s daily entities are close to those leading up to the 2017 bull run. In this case, the daily entities suggest that an increasing number of people are using Bitcoin – a relevant milestone in launching a bull market. On top of it all, the bull may continue to reign for longer if the highly anticipated Bitcoin halving goes as expected.

But before we can ascertain that this year’s bull run is similar or different from that of 2017, we need to go back and look at the factors that led up to bull market in the first place. By doing so, it will enable us to point out the differences/ similarities between the year 2020 bull run and that of 2017

Factors that Stirred the Bitcoin Market in 2017

Rising from the lows of less than $1,000 to as high as $20,000 all within a year, proved that Bitcoin could defy the traditional laws of asset valuation. However, the surge in price can be explained by several factors:

The 2017 bull run was mainly fueled by the Fear of Missing Out (FOMO). Only a sizable number of retailers knew what bitcoin is or understood how it works. The majority of them were trading the digital currency since they saw it rise in value and made other traders rich overnight.

Consequently, there was spiked adoption of Bitcoin by the public leading to the high demand for the coin. The higher the demand, the higher the price. Yet, the coin itself wasn’t quite ready for the wide adoption, which explains the drastic reduction in price in the early beginning of 2018.

According to a recent research, it is likely that a “whale” manipulated Bitcoin’s price in 2017, resulting in the bull run. In this context, a whale is an individual or institution that holds a significant amount of Bitcoin, which is higher than that of the average investor.

The research reports that the “whale’s” transactions on the blockchain revealed that Tether was used to back up the price and manipulate the Bitcoin market. This report doesn’t seem far-fetched since large transactions of Bitcoin can be loosely interpreted as massive adoption of the coin, resulting in a bull market.

Looking behind the 2017 bull market, there were three other bitcoin bull cycles, though they weren’t as significant. However, the idea here is that in each of these bull cycles, including that of 2017, the government institutions hadn’t enforced strict measures against cryptocurrencies as they currently have. This provided an ideal atmosphere for increased bitcoin activities between miners and traders, resulting in increased trading volume.

Nonetheless, since the 2017 bull cycle, Bitcoin and the crypto-market as a whole has evolved and is on its way to a more mature phase.

What has improved since 2017

The most significant change since 2017 is the reduction in Bitcoin transaction fees. The adoption of Segwit, as well as the increase in the number of exchanges, have made the transaction faster and affordable for Bitcoin users.

Of course, if Bitcoin goes into a full-blown bull run, the transaction fees will increase in equal measure. However, the fees will still remain lower compared to other years, incentivizing more investors to join the market.

In 2017, and years before that, blue-chip companies dissociated themselves from bitcoin and blockchain technology altogether.

Years after, there have been a lot of big brand companies showing interest in the cryptocurrencies, with an aim for leveraging the underlying protocol – blockchain. A good example is Facebook Inc, whose CEO announced the launch of the company’s digital coin, Libra. Microsoft is also actively building on the Bitcoin blockchain, as other institutions such as JP Morgan continue to show interest in cryptocurrencies. This gives the whole crypto-market the validation it deserves, prompting mass adoption. Increased mass adoption will likely trigger an increase in Bitcoin prices since it’s the most held coin by crypto investors.

It is estimated that there are about 206 exchanges currently in operation. To investors, this means it is a whole lot easier to liquidate your investment than it was a few years ago when only a few exchanges were operational.

What’s even better is that most of the exchanges accept fiat currency directly, in exchange for cryptocurrencies. Investors can buy cryptos using their debit cards at a lower cost and more efficiently than it was the case in 2017. With better liquidity, especially for BTC, the trading volume is bound to increase, which is an essential feature to complement this year’s bull run.

It was not until the near-end of the 2017 bull run that Cboe and CME launched bitcoin futures. Despite being launched a bit late, the derivatives are meant to offer a more stable trading alternative to BTC, making the futures attractive to institutional investors.

Also, if bitcoin price continues to increase and even reach an all-time high, the derivatives provide an efficient way for investors looking to make returns, by shorting Bitcoin.

It is evident that the Bitcoin landscape has matured since the phenomenal 2017 bull run. More corporations are entering the market, bringing new infrastructure and technologies to improve not just Bitcoin trading, but also the entire cryptocurrency market. If these changes in the market fundamentals are anything to go with, it is safe to say that the 2020 bull run might surpass that of 2017. But even if it fails to do so, 2020 still remains the best year for Bitcoin in terms of the average price. Compared to 2017, when Bitcoin’s average price was $6,125, this year’s average price is, so far, at $9,120, an indication of better days ahead.