How To Profit From Double Top Formations In Forex

In this presentation, we will be looking at the technical analysis chart pattern known as a double top. Being able to recognize this formation or pattern and the information it provides us with will help to trade more effectively.

Double top patterns one of the many pillars of technical trading structures and should be incorporated into your trading knowledge base. Double top identification and understanding can further enhance your technical analysis when trading the forex market,y helping us see more than just support and resistance levels. 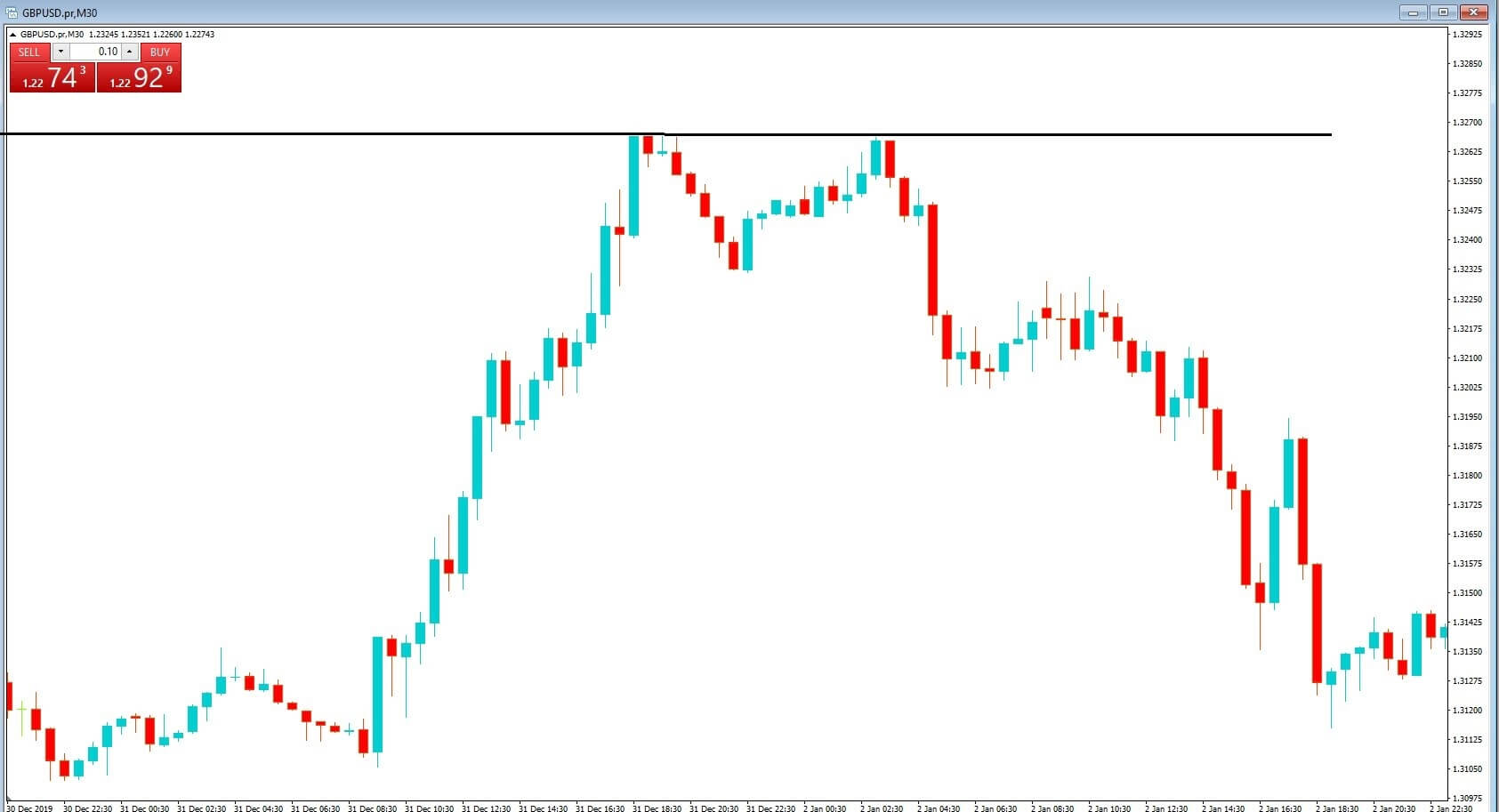 So what exactly is a double top? It will include two high points within the market, which generally signify an impending bearish reversal. There will usually be a decline in price between two high points. After the first peak has formed, there will be a retracement to a certain degree, before another rally to the upside. The second peak usually forms at the same level or slightly below the first peak, although occasionally it might breach the level of the first peak before price action reverses.

Example B (OR EXAMPLE C) 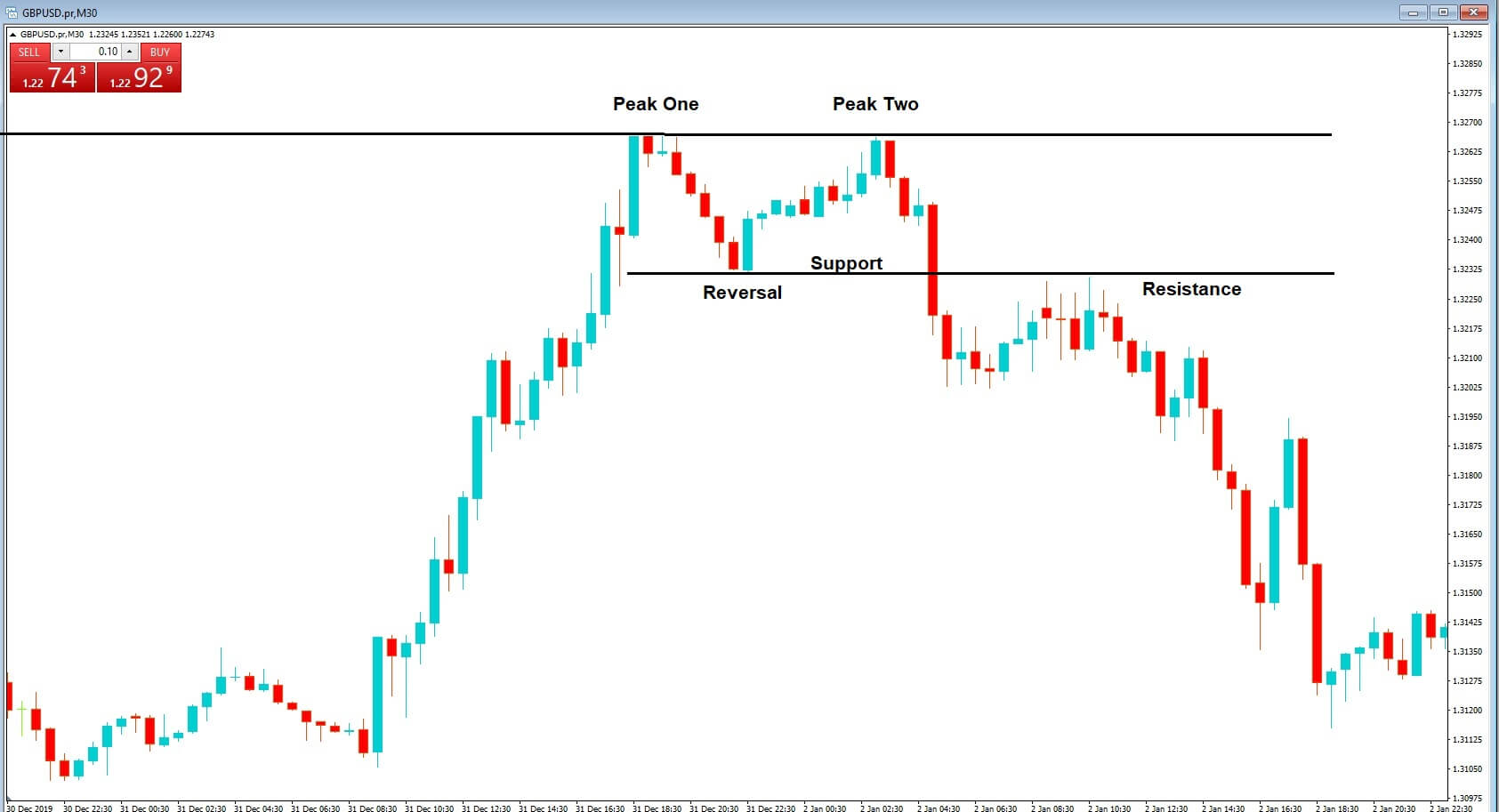 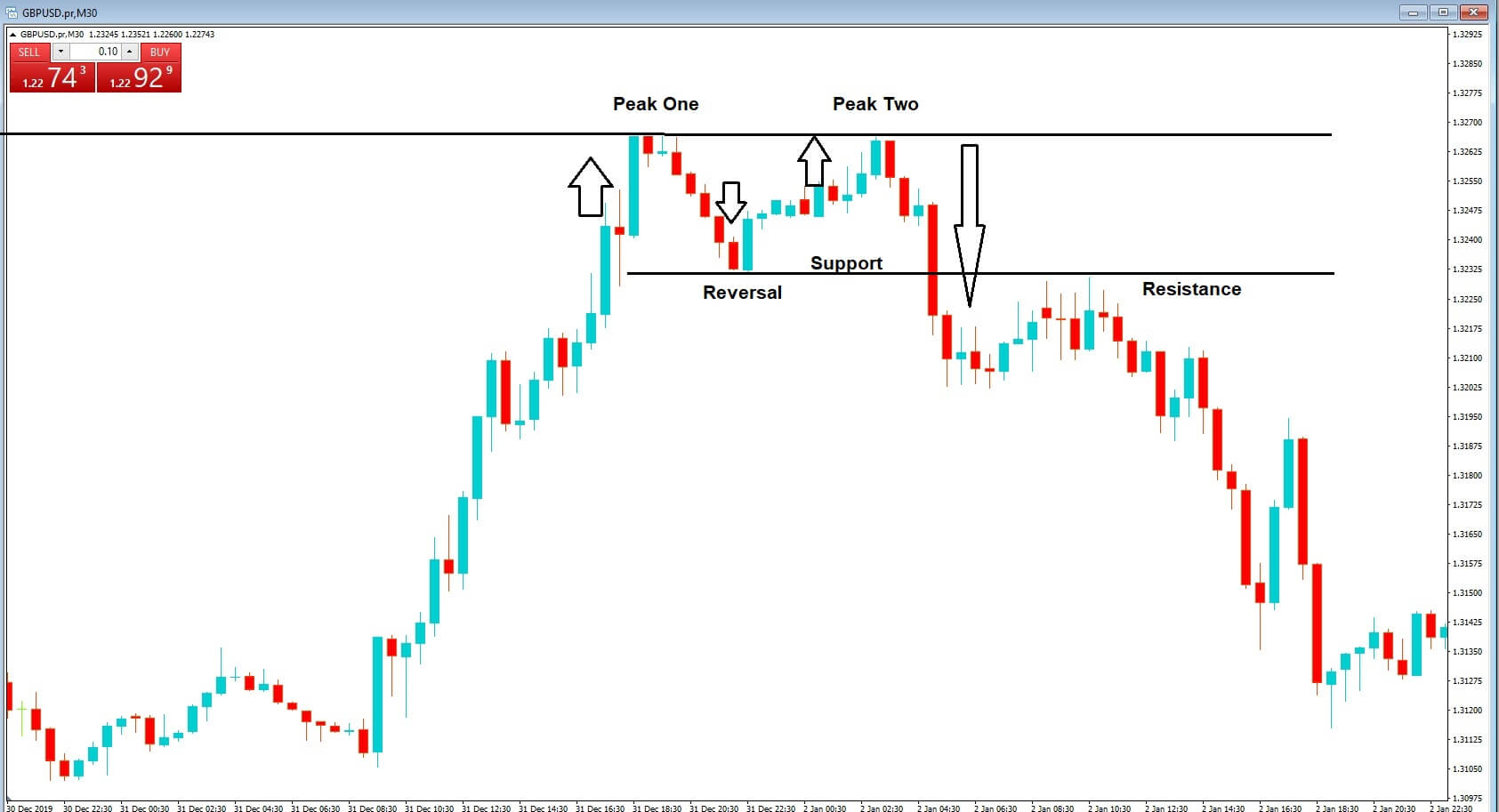 Here we can see that after a rally to the upside to peak one, price action reverses to our line of support line, often called a neckline between the two peaks, before the second push higher to peak number 2, and where price action reverses from this area, suggesting unsustainable buying pressure and that we should expect a reversal. And where price action goes on to breach the previous level of support, with a strong bearish candlestick, this is confirmed as a double top formation. And where price action subsequently comes back after some brief consolidation, with mixed small shaped candlesticks suggesting a lack of direction and where the previous level of support becomes an area of resistance and hence the continuation downwards which adds to our belief and support for this technical setup. 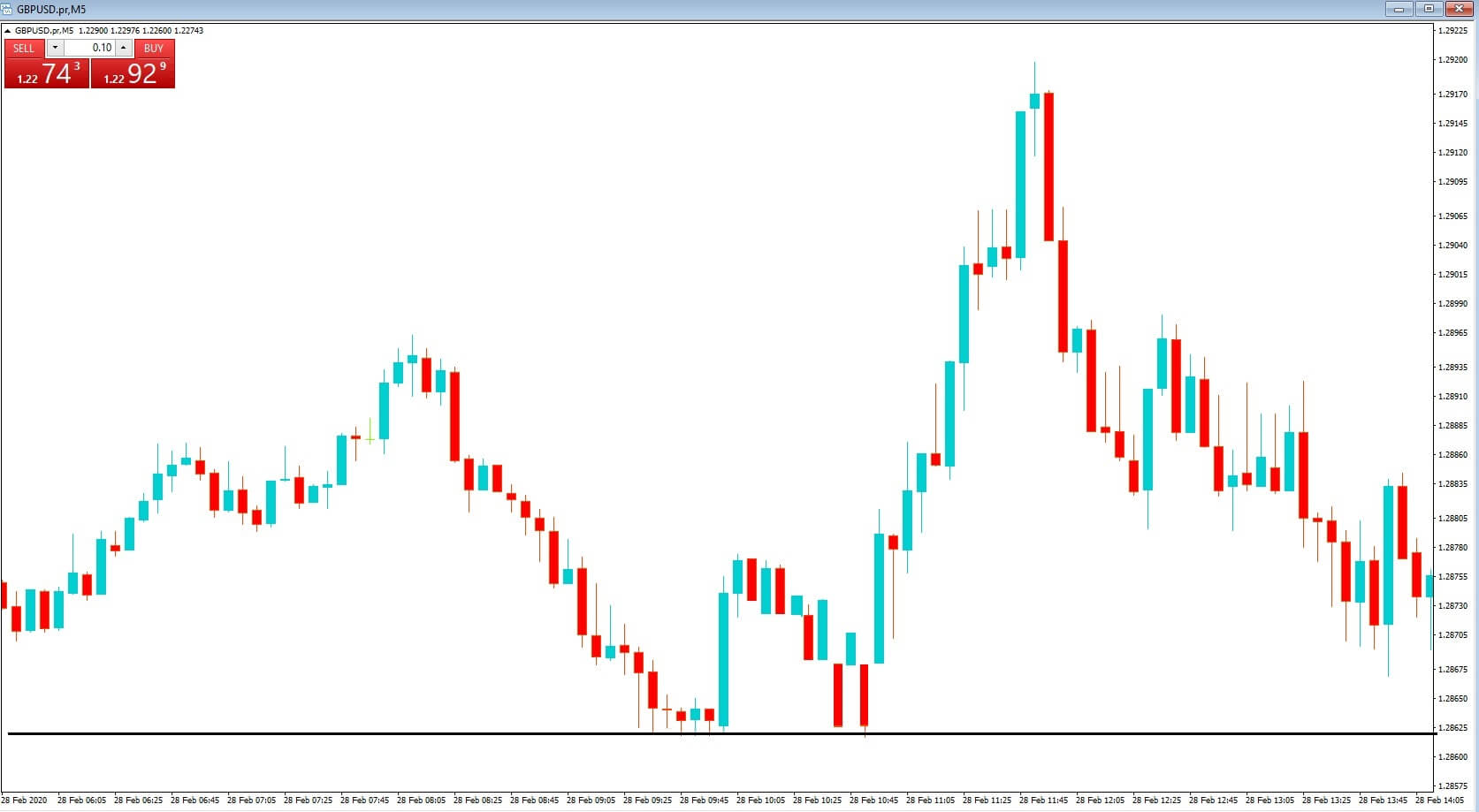 On the flip side, we have the double

bottom formation. This setup is identical to the double top in its theory and execution of trading. However, it is simply in reverse, In which case the exact same rules apply, But it is simply the mirror image of the double top. In this case, we would expect a bullish signal once the neckline is broken. 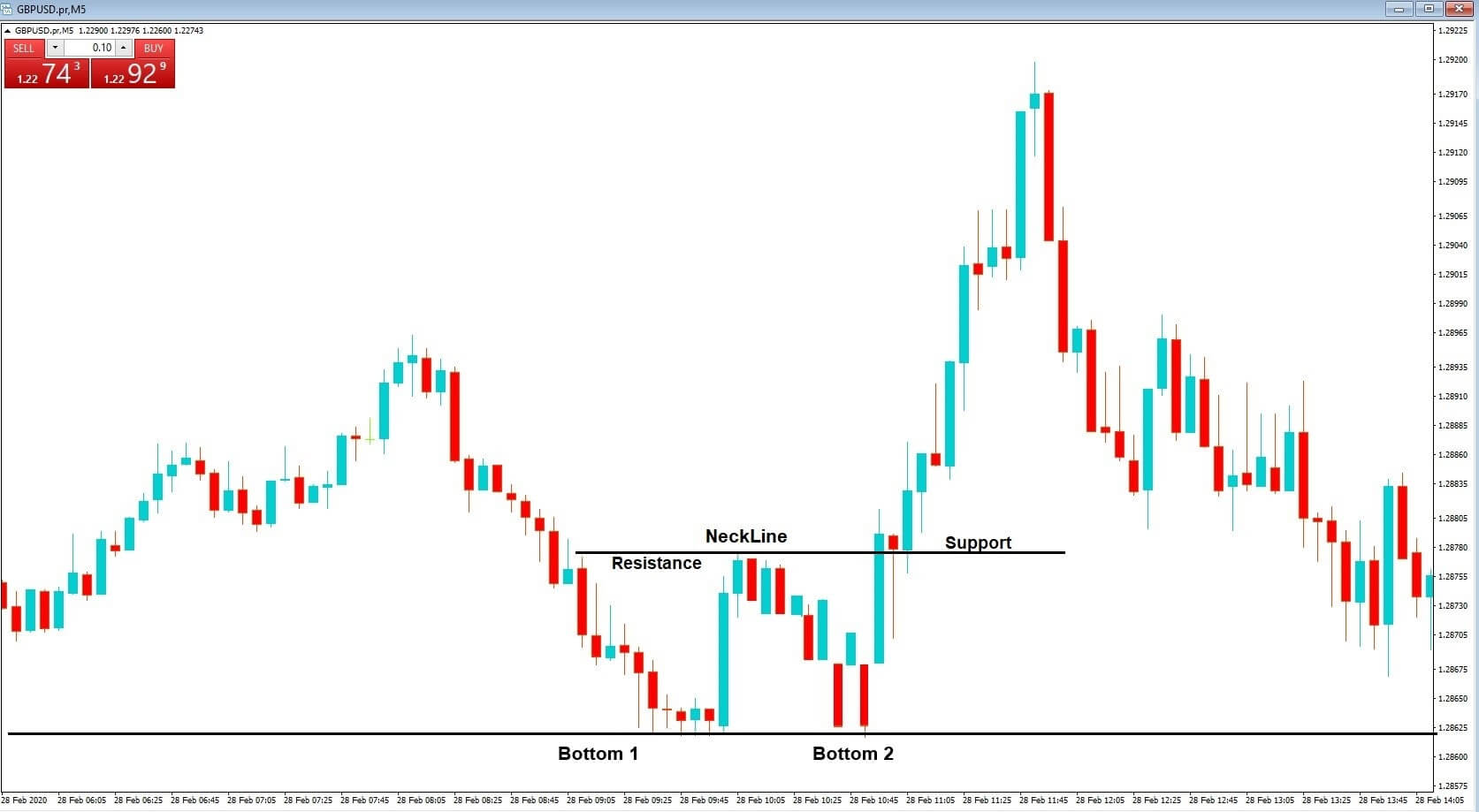 So here, for example, we can see a push down in price action to our first bottom, before price reverses to the neckline, which acts as an area of resistance, and where price subsequently comes down again to our second bottom, and where price action again returns to the neckline and breaches it and where this prior area of resistance becomes an area of support, and where price action continues to the upside from.
So to sum up, we are looking for two peaks at a similar height and where price action reverses between them to a neckline or area of support, which subsequently becomes breached after reversing from the second peak.
Secondly, we should make sure that the peaks are not too small because we prefer them on larger time frames of 15 minutes or higher because that is where we would expect larger amounts of pips to be made from this successful trade setup. This type of setup should be used in conjunction with a stochastic or ma CD to support double top or double or bottom formation.

One of the biggest problems with technical trading is that sometimes these patterns appear obvious in hindsight and that quite often we will miss opportunities and of course this can be very frustrating when you are always missing the mark. These patterns appear on our chats and often can be difficult to decipher when the market is moving, and with the pressure of placing trades sometimes, we simply miss these setups. There are two ways of going about solving this problem, and both have their pros and cons. We can either anticipate the formation before it occurs or wait for confirmation to trade the potential reversal. This will always be down to your appetite for risk, your personality as a trader, and your competence at understanding the nature of the forex market. Reactive traders who are playing the safer game have the advantage of simply seeing the pattern occur and trading it accordingly with the downside to this, which is that part of the trade has already been missed. This can equate to larger potential stop losses and less pips being made as the move continues.

Traders who have gotten into the sell or buy during the second peak or bottom phase of the setup will enjoy the comfort of having tighter stop losses, which should be placed a few pips above or below the first peak or first bottom. And of course, they will be able to claim more pips.

As with anything in forex trading, these things are a matter of trial and error and consistency, and therefore practice and observation will pay dividends in the long run.