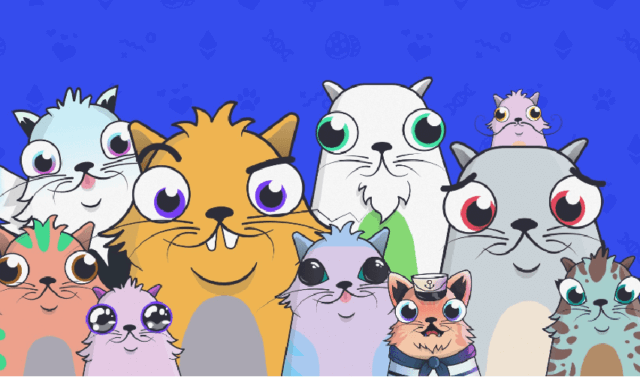 -When Satoshi Nakamoto created the blockchain, he had far more far-reaching goals in mind: a secure technology that would power the world’s first cryptocurrency. And indeed, cryptocurrencies are the biggest adoption of blockchain today.

But then came Ethereum, the blockchain that showed us that blockchain was capable of more. On the platform, users can create smart contracts and build decentralized applications (DApps) – which are applications that cannot be censored or controlled by anyone.

Then one team came and utilized DApps in a way that was completely unprecedented – by creating a game that allows people to buy, breed, and trade cats. The game has taken the world, not just the blockchain world, by storm. Enthusiastic players have poured millions of dollars into the game. Several articles have been published about “kitty phenomena.” Even Ethereum’s Vitalik Buterin himself has given it a shout out – and that is saying something.

So what’s CryptoKitties? This article sets to exploring the intriguing blockchain-powered “kitty verse.”

The Team behind CryptoKitties

Crypto Kitties is the brainchild of a company called Axiom Zen. This company creates many sorts of projects using novel technologies like virtual reality and blockchain.

Based in both San Francisco and Vancouver, the “award-winning venture studio” CryptoKitties wants you to “Collect and trade CryptoKitties in one of the world’s first blockchain games. Breed your rarest cats to create the purrfect furry friend. The future is meow!”

What is a Genetic Algorithm?

A genetic algorithm is a computer science optimization technique that’s inspired by the natural selection process. It works by generating ‘kids’ from a pool of parent solutions that uses bio-inspired operators such as selection, crossover, and mutation. The genetic algorithm represents the genes in the form of numbers. The numbers represent the proteins and other elements that we humans have in our bodies.

Why are we talking about the Genetic Algorithm? Because it’s the technology that CryptoKitties uses to create new kitties. By using a crossover mechanism, a child genome is “sired” from the gene pool of two-parent kitties. This child genome is what grows up to be a new kitty.

The entire cryptokitty smart contract is broken down into smaller and more manageable contracts. The ‘inheritance tree’ of the contracts is like this:

The KittyCore here is the contract that tracks ownership and transfer of kitties. It’s The one that greenlights the siring of new kitties

Where Do New Kitties Come From?

The first cat was adopted on December 2, 2017. Since then, a new cat was born every 15 minutes until November 2018 when the first generation kitties no longer existed.

The white pa-purr (what the developers really, truly call the white paper) states that only 50, 000 generation-0 kitties will ever exist.

Of course, CryptoKitties can breed with each other to birth newborn kitties. Any kitty can be a ‘sire’ or a ‘dame’ for a breeding pair. After breeding takes place, the owner of the dame will be given the baby kitty – who will have ‘cattributes’ of their parents, as well as random cattributes. In rare cases, a ‘fancy cat’ with custom cattributes will be born.

There’s no limit to how many CryptoKitties can exist. On the CryptoKitties market, you can also pay to breed your kitty with another person’s kitty – if you like that kitty’s cattributes.

How to Buy and Store CryptoKitties?

Before you get started with anything, there are three things that you need:

Before you can begin to buy CryptoKitties, you need to have the following:

Once you have those, it’s pretty straightforward. Go to the CryptoKitties website and choose the kitty of your preference. Don’t you like any? No problem. Simply search for a ‘Gen 0’ kitty under the ‘Gen 0’ tab.

To sire new kitties, go to the ‘Siring’ tab. On there, you’ll see all the kitties that have been put up for siring. Go ahead and choose the kitty that you’d like to have mated with yours.

CryptoKitties are one of the reasons scalability of the Ethereum blockchain has come into sharp focus. This is because the game became so popular that it clogged up the Ethereum network such that transactions would take days before confirmation. Due to this, the creators of the game had to increase ‘birthing’ fees.

Axiom, the company behind the game, said this in a Medium article:

“The excitement and adoption we’ve seen this week has been overwhelming, and we couldn’t be happier! However, the Ethereum network is completely full. The only way to keep CryptoKitties from lagging is to increase the gas prices so that all transactions can complete quickly. We know that increased gas prices will mean that some of you will need to slow down your breeding regimen, and we are incredibly disappointed by that. But who knows? Maybe this slowdown will just mean that you’ll love the Kitties you already have that much more.”

From this episode, it was clearer than ever that the Ethereum blockchain and, indeed, the current entire blockchain setup is not really capable of handling mainstream demands. That means that they have to work on the scalability issue before they can play the role of a decentralized, peer-to-peer future.

As of early 2020, CryptoKitties runs on the Ethereum network. Smart contracts oversee every aspect of the buying and selling of kitties. As such, no one can change, remove, or change a kitty once it has been birthed. The person that holds a CryptoKitty can hold it, let it mate with another kitty, or trade it if they feel like.

The game also uses Ether as the medium for transactions. It’s still not possible to buy CryptoKitties with fiat currency as of now. However, the developing team hopes to make this option available in the future.

Whether you’re a cat lover or not, CryptoKitties allows you to immerse yourself in a unique gaming experience of Kitty verse and make lucrative profits while at it. The game is an illustration of what blockchain is capable of.

Who would have thought that Satoshi’s technology would one day be used for purely recreational purposes? CryptoKitties’ wild popularity just shows that blockchain games can be a hit, as long as they provide some form of value to the masses. More than industry applications, this could be the very pathway to taking blockchain mainstream.