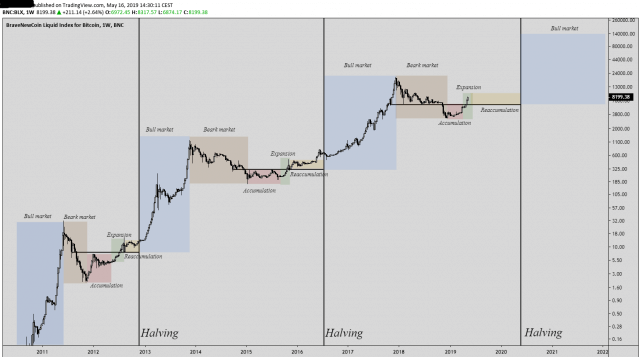 Up to 30 companies in Japan have announced plans to issue digital yen, and Rick Rieder, the CIO of BlackRock, is taking crypto seriously if his comments on CNBC are anything to go by. According to the world’s largest asset manager, the functionality and durable mechanism of crypto assets makes them more functional than gold, a fact that is up for debate.

It seems that the financial sector around the world is gradually embracing cryptocurrency, and it’s only a matter of time before it transitions to the mainstream. As a crypto investor, the current trend is satisfying.

But is it time to make a move and laugh all the way to the bank?

Well, the most recent bitcoin highs had some investors rolling in a sense of accomplishment and success when they cashed out at the right time. Others waited for the prices to continue the upward trajectory above $41,000, but it is now on a free fall.

Well, understanding the price movement of bitcoins is critical to make wise decisions.

The price of bitcoin moves in cycles of booms and busts. If we were to learn anything from history, investors’ best financial decision has been to own bitcoin in a bull market.

Let’s examine the historical price behavior to have a better understanding of the bitcoin price volatility.

Bitcoin’s trading history is characterized by volatility since its creation in 2009. It has a reasonably short life, but it has seen a lot of action. One upon a time, the cryptocurrency traded for next to nothing, and the real price increase was from $0.0008 to $0.08 for a single coin.

All along, bitcoin has been through significant rallies and crashes. Regardless, interest in bitcoin has surged in 2020 and is expected to continue in 2021. By 2020, the crypto-currency had recouped all its losses to record an all-time high.

At this phase, the fear of missing out (FOMO) and euphoria among bitcoin investors is at its highest. The emotions compel many people to purchase at abnormally high prices leading to a prolonged bull trend that pushes the prices through the roof.

The high exponential stage is also called “topping out,” where the bitcoin prices reach their peak.

The correction stage comes immediately after the euphoria that characterized the previous 12 months. The stage corrects for over-optimism by shedding considerable valuation.

Profit-taking investors create a sell-side pressure, which causes the bitcoin to drop a bit after an abnormal growth.

Following the price correction, the sell-side momentum starts to slow down and bottom out. It is at this stage that bargain buyers take advantage of the discounted prices to accumulate bitcoins.

Eventually, new demand starts to form, and the phase becomes a point of maximum financial opportunity where the prospect of reward overtakes that of the associated risk. The new growing demand is driven by the desire to make enormous profits.

After bottoming out, bitcoin starts to go up. Historically, the continuation stage has been all about exceeding the sell-side pressure characterized by sellers resisting the growing prices.

The continuation stage is an essential technical step that indicates a shift in market psychology. The stage tends to encourage strong emotions to result in buy-side momentum. Following a successful 12-month close, the market psychology then transitions to buying from selling.

The Effect of Bitcoin Halving

Typically, bitcoin halving marks a fundamental variation in the protocol of the cryptocurrency. The event also has a significant impact on the prices of the bitcoin as well. It acts as a catalyst to propel the prices to new heights.

Given that 21 million is the maximum supply cap, the halving event means that it will take much longer for all the bitcoin to go into circulation. It also means that all the bitcoins created will be less and less, limiting the supply. The scarcity of bitcoins increases value, which is why bitcoin halving acts as a catalyst in the new bull market.

In the past, the bitcoin price has grown exponentially following the halving events. This observation can be used to explain the current situation.

The bitcoin’s next phase one was expected to be in 2021 to manage a 12-month candle close above the price level of ~$14,300. It has clearly exceeded this.

The belief was that the $20,000 mark will spur the buy-side momentum driven by investors’ intense emotions.

The 12-month price chart indicated that ~$14,300 may actually be the inflexion point in market psychology. Based on the 4 Year Cycle historical trends, a candle close above ~$14,300 provides the necessary confirmation that the prices may go above $20,000 in 2021. That is just what happened based on the current prices.

The fall in prices comes after the UK Financial Conduct Authority warned investors that they could lose everything based on difficulties in valuing crypto assets and price volatility.

However, the problem is that the price volatility will pique the interest of individual investors whose ability to take on significant losses is a far cry compared to institutional investors.

Since bitcoin was created, the debate has raged about whether the abnormal rises in prices constitute market bubbles or are objective indicators of its future role in the financial ecosystem. A market bubble is when the asset value becomes over-inflated.

Some investors will see the latest bitcoin rise and fall as a bubble that has burst. On the other side of the spectrum, some experts believe the bitcoin fluctuations are nothing out of the ordinary and will continue to occur towards its eventual valuation.

The considerable upside swings followed by corrections are normal behaviour and confirm the bitcoins four year cycles is more than just a theory.

Bitcoin prices were in the first stage of exponential growth to reach an all-time high of $41,962. Apparently, the cryptocurrency is now in the correction stage before it enters the accumulation and recovery phase, and eventually, continuation.

As with any other new technology, bitcoin prices are highly volatile, but it’s normal behavior. Based on the four-year cycles, bitcoin was experiencing exponential growth towards the start of January 2021, but it is now in the correction stage. The slashing of up to 20% of its value is just a normal phase of correction and nothing to cause panic.

Bitcoin investment is not for the faint-hearted. It is only for those with higher risk tolerance levels, sufficient exposure to the asset class, and a long term view of the technology. It would be best if you never lost sight of the big picture. Focus on the forest as opposed to a single tree. Happy trading, folks!