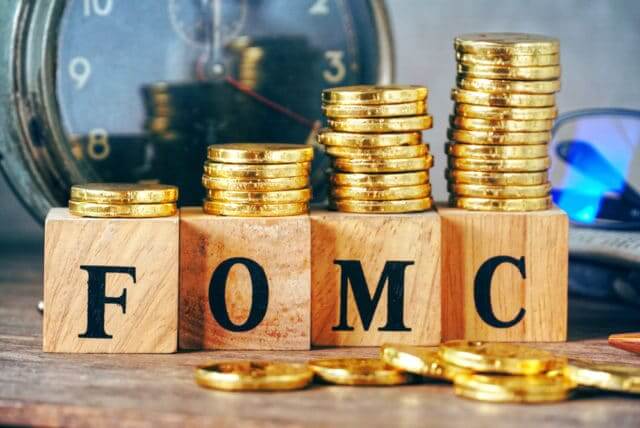 The U.S. dollar was steady ahead of the release of the latest Federal Reserve monetary policy meeting due later today. The Dollar Index closed broadly flat at 97.82. While media reported that the U.S. and China are discussing the size of tariff rollbacks, President Donald Trump cautioned to force higher tariffs in case a deal is not reached.

The EUR/USD is flashing red and will likely slip from its recovery rally, and today’s close will decide the next direction. As of writing, the currency pair fluctuating in the bearish range of 1.1084-1.1063 and representing declines on the day within yesterday’s bullish and bearish range of 1.1090 and 1.1048.

On the technical side, the EUR/USD pair created an inside bar candlesticks pattern today. Moreover, a close above the inside bar’s high of 1.1084 is needed to improve the recovery rally from 1.0989. While a close below the inside bar’s low of 1.1063 would suggest a bearish reversal.

On the other hand, the United States ten-year yields hit the two-week low of 1.763% and have dropped almost 20-basis-points since the topping out at 1.972% on November 7. Apart from Yields, the United States and China trade concerns are sending the risk assets danger.

It should be noted that the market flow may stand in favor of sellers if the FOMC’s 29-30 October meeting sounds hawkish. The meeting is scheduled to happen at 29-30 October19:00 GMT.

However, the hawkish tone has to be strong because, as we know, the financial markets have confirmed that the rate cuts by the Federal Reserve will not deliver until June of 2020.

The EUR/USD displayed bearish behavior after testing the resistance mark of 1.1090. Today, the EUR/USD pair has violated the upward channel, which supported the pair around 1.1080 level, and it’s now extending it towards 1.1050 level. Consider taking sell positions below 1.1075 today with the aim of 1.1040.

The GBP/USD pair hit the bearish track for the second consecutive day and representing 0.19% declines on the day, mainly due to uncertainties surrounding the Tory leader’s public favor after the ITV debate. By the way, the cable pair is currently trading at 1.2915.

At the broadside, the ITV debate, which happened between the Tory and the opposition Labor leaders, seemed peaceful as both parties showed a relaxed attitude during holding to part and of Brexit and 2nd referendum, respectively. At the end of the debate, the survey surprise the GBP/USD pairs traders because the United Kingdom Prime Minister Boris Johson got only 51% votes in his favor whereas, on the other hand, the opposition party leader Jeremy Corbyn got 49% votes.

In addition to the recent polls of the ITV’s debate, the uncertainties over the UK PM’s refrain from publishing the news of Russian interference into the Brexit referendum and delaying the corporate tax forms also simulate challenges to the Tory administration.

At the greenback front, another reason behind the GBP/USD pairs weakness is that the U.S. Dollar extended its gains and offer more weakness to the GBP/USD pairs mainly due to the favorable housing market data from the United States. It also helped the US Dollar strength the United States Federal Reserve policymaker John C. Wiliams continued support for the current monetary policy also supported the U.D. buyers.

At the Sino-US front, the greenback extended its recovery streak on the day due to the risk-off arisen by the United States and China trade war regarding the Hong Kong bill. The risk-tone also weighs down amid on-going protests in Hong Kong and Israel. As a consequence, the U.S. 10-year treasury yields drop to 1.75%.

Looking forward, all the market’s eyes will be on the Feral Open Market Commmetiiees latest monetary policy meeting, which is scheduled to happen on 29-30 October, whereas the trade and political headlines will likely keep the trader entertaining.

The leading indicators such as a MACD and RSI, are holding in the selling zone, suggesting chances of more selling. Consider staying bearish below 1.2935 today.

The USD/JPY currency pair representing marginal declines and having hit the low of 108.36, the pair is currently trading at 108.50. As of writing, the pair is fluctuating in the range of 108.38/57, mainly due to weakness in the Treasury yields and lack of fresh impulse in the trade war and Brexit.

On the green side, the USD/JPY currency pair has recovered from session lows but remains on the defensive below 109.07 despite the weakness in the Treasury yields.

At the Sino-US front, the greenback extended its recovery streak on the day due to the risk-off arisen by the United States and China trade war regarding the Hong Kong bill, and Beijing warned the United States to do not interfere in this matter. The risk-tone also weighs down amid on-going protests in Hong Kong and Israel. As in consequence, the U.S. 10-year treasury yields drop to 1.75%.

At the Brexit front, the ITV debate, which is happened between the Tory and the opposition Labor leaders, seemed peaceful because both parties showed a relaxed attitude during holding to part and of Brexit and 2nd referendum, respectively. However, at the end of the debate, the United Kingdom Prime Minister Boris Johson got only 51% votes in his favor, whereas, on the other hand, the opposition party leader Jeremy Corbyn got 49% votes.

Meanwhile, the Fedspeak came with New York Federal Reserve president Williams announced that the economy is in a “good place.” The U.S. 2-year Treasury yields roundtripped between 1.59% to 1.62%, while the 10-years initially rose from 1.80% to 1.83% but was then sent back to 1.78%.

The USD/JPY is trading at 108.40, as the bearish engulfing candle on the 2-hour chart is suggesting a strong bearish bias for the pair. Closing of another bearish candle will confirm bearish setup and the safe-haven currency pair USD/JPY may drop towards 108.200 today.