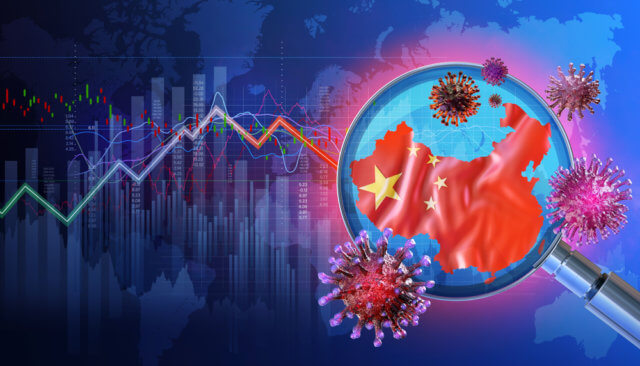 The U.S. dollar strengthened versus its major peers, with the ICE Dollar Index jumping 1.3% to a three-week high of 99.38. Later in the day, the European Commission will post final readings of February CPI (+1.2% on-year expected) and January trade balance (19.2 billion euros surplus expected).

The EUR/USD marked a day-low of 1.0802 before rebounding to close at 1.0962, down 0.3%. The European Central Bank announced a 750 billion-euro bond-buying program to counter the coronavirus impacts. ECB President Christine Lagarde said, “there are no limits” to their commitment to the euro.

The Trump administration announced that Trump administration is planning to give checks directly to Americans in the shape of a $1 trillion stimulus program. Moving ahead, the EUR/USD currency pair may return and possibly break below Tuesday’s low of 1.0955 if the stocks cheer the substantial monetary and fiscal stimulus.

After the announcement of stimulus, the ECB President Christine Lagarde showed a willingness to use all important tools to stop the negative impacts of the deadly virus. At the press time, the EUR/USD currency pair turned lower from 1.0980 to below 1.08 due to the strong haven bid around the dollar rose, producing big gains for the greenback against the bucket of currencies.

On Thursday, the major currency pair EUR/USD continues to trade bearish as it as violated and closed below horizontal support becomes a resistance level of 1.0990. The EUR/USD is currently trading around 1.0970, and it’s forming a lower-lows pattern on the 4-hour chart, which mostly drives a continuation of a selling trend.

The GBP/USD plunged 3.5% to 1.1633, the weakest level since 1985, as U.K. Prime Minister Boris Johnson’s response to the coronavirus pandemic failed to convince investors.

The GBP/USD pair slipped due to a stronger dollar after the U.S. official data showed that housing starts posted at an annualized rate of 1.599 million units in February (1.500 million units expected).

As per the latest report, the death losses rose to 99 on Wednesday vs. Tuesday’s 67, reporting a 48% jump. As of March 18, 2,626 people in the United Kingdom were tested for coronavirus. The test numbers have been increasing from just over 1,000 a day at the end of February, when testing started, to more than 6,000 per day by mid-March.

Looking forward, the investors will now keep their eyes on the global measures to control the negative impacts of the virus for taking the near-term direction. However, the greenback may keep benefiting from the same due to its safe-haven status.

The GBP/USD continues to encounter bloodshed in the wake stronger dollar and weakness in the GBP. The direct currency pair continues to drop for a second consecutive week, and so far, it’s has traded bearishly from 1.3000 level to 1.1540 level just in two weeks.

On the weekly timeframe, the GBP/USD pair has violated the descending triangle pattern, which supports it around the 1.2030 level. Below the 1.2030 level, the GBP/USD is expected to drop further until the next support level of 1.1245. Since the market is oversold, traders may see a bullish correction above 1.1245 level until 1.1885 or 1.2045 level, but then again, chances of selling will remain strong.

The USD/JPY extended its rally for a second straight session, climbing 0.6% to 108.38. During the Asian session, the USD/JPY currency pair hit the session high of 109.06 before the time of writing, representing 0.70% gains and continued its 3-day bullish streak near above the 108.50 after the latest downbeat data from Japan. As well as, broad-based USD strength also keeps the pair bullish. At the time of writing, the USD/JPY currency pair is currently trading at 108.86 and consolidates in the range between the 107.89 – 109.55.

At the data front, Japan’s National Consumer Price Index (CPI) came in below 0.8% forecast on MoM to 0.4%, whereas the CPI ex Food, Energy (YoY) slipped beneath 0.9% expectations to 0.6% for February.

Following the data, the BOJ minutes for the January monthly meeting announced further support for the Japanese central bank’s Quantitative Easing (Q.E.). As in result, the Japanese yen got another burden to carry, as the Japanese press pushes for government stimulus, which in turn offered additional support to the USD/JPY pair.

The stronger U.S. dollar has also driven the bullish trend in the USD/JPY currency pair, and it’s currently trading over 109. The indirect currency pair has also violated the double top resistance level of 107.950, and closing of candles above this level may drive further buying in the pair.

On the 4 hour timeframe, the USD/JPY is still trading within an upward channel, which is likely to drive further buying in the pair. Therefore, the pair may find support at 108.100 level, and above this, the chances of buying remain strong until the next resistance level of 110. Let’s stay bullish above 108.250 today.