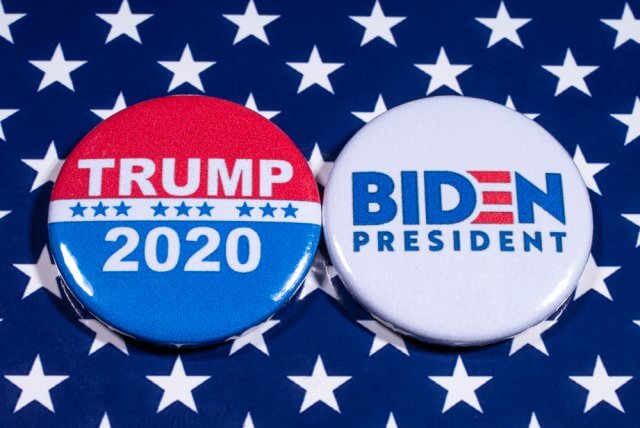 On the news front, the market is exhibiting mixed but sharp movements in the wake of U.S. elections. Democratic party’s Joe Biden seems to take the lead so far, and his winning remains solid. The market is exhibiting safe-haven appeal in the wake of election results. Besides, the European economy is due to release Services PMI figures that may drive some price action in the market, but most of it is likely to be overshadowed by the U.S. election outcome.

The EUR/USD pair was closed at 1.17198 after placing a high of 1.17396 and a low of 1.16297. The EUR/USD pair surged on Tuesday and recovered some of its previous daily losses of 6 consecutive sessions. The pair climbed to 1.1739 level on U.S. Election Day as the U.S. dollar was down by 0.83% on the day, and the U.S. Dollar Index was trading at a six-day lower level under 93.40. The improvement in the market sentiment could be attributed to the declining expectations of any outcome of a disputed election that could result in a legal battle, political and social tension.

The rise in EUR/USD pair’s prices was also because of the anticipations of a so-called Blue wave outcome of the U.S. election. As the victory of Joe Biden would have a negative impact on the U.S. dollar amid his intentions to deliver a massive stimulus package after his victory, the EUR/USD pair gained further and rose to its three days highest level on Tuesday.

Apart from the U.S. election, rally in EUR/USD pair continued on the day due to risk appetite after European Central Bank reported that Pandemic Emergency Purchase Programme (PEPP) would likely remain the main instrument to increase the stimulus at the next meeting as the ECB has already committed to act in December and has not ruled out using all available instruments. However, the virus spread and the subsequent lockdowns could weigh on EUR/USD pair in the coming days.

On Tuesday, France reported the highest death toll since April, and both Netherlands and Hungary announced new virus lockdowns. These concerning situations in Eurozone related to the coronavirus pandemic kept the gains in EUR/USD pair limited on Tuesday.

On the data front, the French GOV Budget Balance was released at 12:45 GMT that came in as -161.6B for September compared to Previous -165.7B. From the U.S. side, the Wards Total Vehicle Sales dropped to 16.2M from the expected 16.5M and weighed on the U.S. dollar that ultimately added further gains in EUR/USD pair on Tuesday.

The main driver of the EUR/USD pair remained the U.S. dollar on the U.S. Election Day on Tuesday that was under pressure in the uncertain environment and continued supporting the EUR/USD pair’s upward momentum,

The EUR/USD is trading sideways, with a wide trading range of 1.1615 to 1.1760 area as the U.S. elections keep the markets on the move. On the lower side, the bearish breakout of the 1.1615 area can extend selling until the next support area of the 1.1591 level. The release of European services PMI data may support the pair; elsewhere, the outcome of elections may drive further market movement. The MACD is entering the selling zone, but we may not see further selling until the 1.1615 level gets violated.

The Americans were heading to the polls, and the market participants were shrugging off the risk aversion by anticipating a clear Democratic victory that would open the way for a larger fiscal stimulus package and, thus, weakened the U.S. dollar, ultimately added in the gains of GBP/USD pair.

Meanwhile, the lack of any news from the Brexit negotiations that have limited period left as the December 31 deadline was near, along with the introduction of a one-month lockdown in the U.K. to curb the traders ignored the effects of COVID-19 infections on Tuesday that could have capped further gains in the currency pair GBP/USD.

Despite there was no news related to Brexit progress from the ongoing talks between the E.U. and the U.K., the hopes for a last-minute deal helped prop up the British Pound. These hopes, combined with the U.S. dollar weakness, added additional gains in GBP/USD pair. The U.S. dollar index fell sharply to below 93.50 level, and it was down by 0.75%.

On the data front, the U.S. Factory Orders for September came in as 1.1% from the expected 1.0%, and the U.S. Wards Total Vehicle dropped to 16.2M from the anticipated 16.5 M weighed on the U.S. dollar that helped the British Pound to U.S. dollar exchange rate.

On the Brexit front, the reports indicated that talks were stuck between both parties on a level playing field and fisheries, the two main issues that stalled progress a month ago. However, other areas like social security saw progress and raised bars for a Brexit deal before the transition period. Both top negotiators Michel Barnier and David Frost will report on the progress of recent talks on Wednesday, and traders are keenly awaiting it.

The pair GBP/USD likely continue trading alongside risk-related sentiment during the upcoming sessions. As well as British Pound will not ignore any Brexit-related headlines once the picture of the U.S. election became clear.

Just like the EUR/USD, the GBP/USD is also trading sideways in between a narrow trading range of 1.3122 – 1.2940 area. The Cable has recently violated the downward channel, supporting the GBP/USD pair around the 1.2940 level. Above this level, the odds of buying remain strong today. On the higher side, the Sterling may find next resistance around 1.3122 while the bearish breakout of 1.2940 may lead the Cable towards the 1.2855 level. A choppy session is expected today.

The USD/JPY pair was closed at 104.497 after placing a high of 104.799 and a low of 104.431. After placing gains for three consecutive sessions, the pair reversed and posted losses on Tuesday. The U.S. dollar was under pressure on the day and was moving below 93.49 level on the back of expectations of a sweeping Democratic Party victory. The so-called blue-wave where the Joe-Biden with Democrats will take both Houses of Congress would indicate that further stimulus was on the way.

Since markets started to price in a global economic recovery, the U.S. dollar was on the back foot, a coronavirus vaccine, and ongoing fiscal and central bank stimulus in anticipation of renewed reflationary momentum.

The uncertainty over the vote’s outcome kept the safe-haven appeal in demand and continued supporting the Japanese Yen due to its safe-haven status and weighed on the USD/JPY pair. The uncertainty further escalated after Trump showed his willingness to challenge any unfavorable outcome to him legally. It came in response to the Initial polls that suggested that Biden was in the lead, and there will be a Blue/Democratic wave in the election. However, the revised readings showed that the gap between Trump and Biden was tightened.

Biden accused Trump of mishandling the COVID-19 pandemic and deserting safety precautions, including the mandated mask-use that could have saved countless lives from the crisis. Trump refuted that the American economy would be shattered under Biden, who wanted to raise most wealthy taxes.

Meanwhile, on the data front, there was no macroeconomic release from Japan due to Bank Holiday. From the U.S., at 20:00 GMT, the Factory Orders in September elevated to 1.1% from the estimated 1.0%. The Wards Total Vehicle Sales for October weakened to 16.2 against the anticipated 16.5M and weighed on the U.S. dollar that ultimately added pressure on the USD/JPY pair on Tuesday.