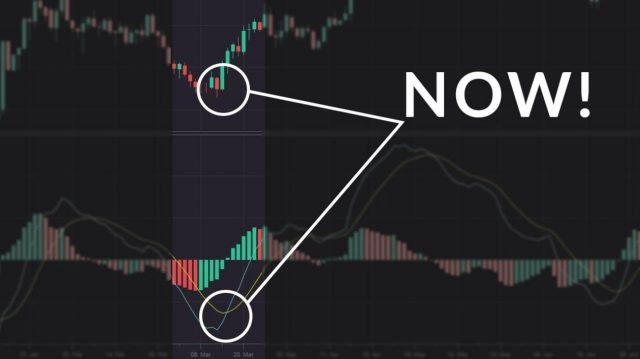 The descending triangle is also known as the continuation pattern, appears in an ongoing downtrend. The patterns show the demand for the underlying asset. The pattern is first drawn by the horizontal line along with the swing lows and the declining trend line to be drawn at the lower highs. When these two lines met, we witnessed the descending triangle pattern. The breakout of the pattern is a sign of the seller’s momentum is back into the show and going short is beneficial.

MACD stands for MOVING AVERAGE CONVERGENCE AND DIVERGENCE. MACD is one of the simplest and effective momentum oscillators developed by Gerald Appel in the late seventies. By subtracting the longer period average into the shorter period average, the MACD turned the two moving average, trend following indicator into the momentum oscillator. The MACD is an unbounded indicator that fluctuates above and below the zero line, generating the signal line crossovers, centerline crossovers, and divergences. Gerald Appel uses the values of 12, 26, and 9 as the default one, and the traders can change them according to their trading style.

THE IMAGE BELOW REPRESENTS THE ASCENDING AND DESCENDING TRIANGLE.

The image below represents the descending triangle in the EURJPY pair.

The image below represents the entry, exit, and stop-loss in the EURJPY forex pair. As you can see, the currency was in a downtrend on the 240 chart, and the breakout below the pattern also the reversal at the overbought area on the MACD was a signal of selling. We took the selling trade with the stops above the upper line of the pattern, and taking profit was based on the dying momentum of the price action.

The image below represents the Ascending triangle in the EURJPY pair.

The image below represents the entry, exit, and take profit on the EURJPY forex pair. As the price action printed the pattern the MACD oscillator was already moved, and it goes above the zero line, the indicator above the zero is a sign of the buyers gained the buying momentum. As we took the entry, the prices go strongly goes to the north, and we witnessed the brand the new higher high.

TIMING THE PATTERN BY USING THE MACD OSCILLATOR

The image below represents the uptrend in the GBPCAD forex pair.

The image below represents the descending triangle in the GBPCHF forex pair.

The image below represents the entry, exit, and stop-loss in the GBPCHF pair. The pair was in a downtrend and in the pullback phase the price action prints the descending triangle pattern. Inside the pattern, we took the three selling trades, and the crossovers confirmed each trade happened on the MACD oscillator. When we witness the very first lower high on the chart, it was confirmed by the crossover above the zero line, and during the second trade the oscillator was moved below the zero line, and it gave the crossover.

During the third trade, the indicator was already below the zero line, which means the sellers were gaining momentum. We didn’t take the selling trade at the breakout this is because the entry didn’t confirm by the MACD oscillator and we were satisfied by the three trades only. Do not try to take so many trades in one pattern; your whole goal should be to take less trade and always try to go for the better price.

It Is advisable not to risk big money in the first trade this is because the buyer momentum is during before the appearance of the first higher low, and risk little more money in the second higher low and go big in the third higher low trade. The reason we are going big for the third entry is that the two previous lower highs, confirm the existence of the seller and in last the breakout entry should be way bigger than the previous entries.

Pattern trading is quite a popular way to trade the markets. There are so many trading tools, and some of the patterns are easy, and some are hard, some are leading, and some are laggards. In the end, your game completely depends on how well you master the set number of trading tools. Do not try to use everything in the market; this way is not going to work. Narrow down your approach in each category and pair one tool with another. Master them very well to mint the money from the markets. You should be so good at limited tools that no one around the globe should be able to beat you.

In this article we choose the tools different tools from two different categories, and we showed you the only two trading strategies, the limited your tools and strategies are the better it is, this is because each trading tool is made to generate the trading signal and if one day you choose one tool and another day you choose the second tool. In this way, you are simply gambling in the market. Simply follow the strategies above and master them very well on the demo to trade on the real account.