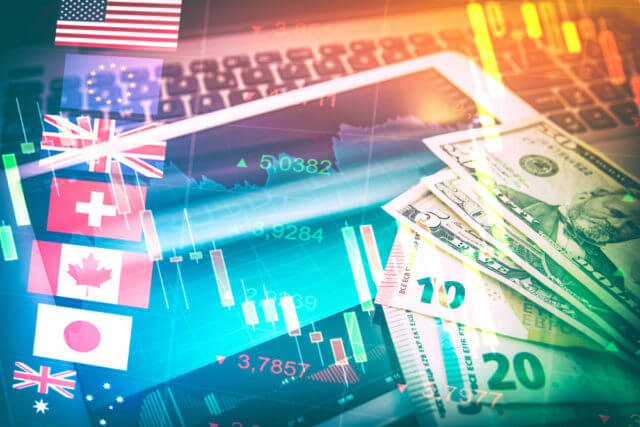 The U.S. Dollar Index gained 0.2% on the day to 97.69. The EUR/USD slid 0.4% to 1.1055, the lowest level since early December. The European Central Bank left its monetary policy steady (deposit facility rate at -0.50%). ECB President Christine Lagarde said there are signs of a moderate increase in underlying inflation, and the downside risks to the growth outlook are less pronounced. Later today, research firm Markit will release Eurozone January Manufacturing PMI (46.8 expected) and Services PMI (52.8 expected).

The U.S. Labor Department reported that initial jobless claims climbed to 211,000 in the week ended January 18, lower than 214,000 expected. The Conference Board Leading Index declined 0.3% on month in December (-0.2% expected).

The EUR/USD currency pair is moving on the bearish track, after hitting the 7-weeks low of 1.1036 yesterday after the European Central Bank President Lagarde told during her conference that the risk to the Eurozone growth was still on the negative side. As of writing, the EUR/USD currency pair is currently trading at 1.1050 and is consolidating in the range between the 1.1047 – 1.1058.

It is worth to mention that the published Below-Forecast figures would confirm Lagarde’s concerns about downside risks to the Eurozone economy and increase the selling pressures on the EUR currency. As a result, the EUR/USD currency pair may test support at 1.0981 (November 29 low).

On the positive side, the common currency will likely to get bids if the PMI numbers exceed the estimation by a significant margin, although the bearish outlook would be canceled only if the pair succeeds to close above Thursday’s high of 1.1109.

The EUR/USD is trading at 1.1036 area, having formed a series of Doji candles pattern above 1.1030 support level, particularly on the 4-hour timeframe. The bullish Doji pattern is proposing the odds of a bullish and bearish trend both in the EUR/USD. The recent manufacturing and services PMI economic events have performed really well and these may help support the EUR/USD currency pair today.

The GBP/USD currency pair stopped the Thursday losses and recovered slightly, possibly due to the positive trade headlines. But the traders are looking careful ahead of the preliminary readings of January month’s PMI for fresh impulse. As of writing, the GBP/USD currency pair is currently trading at 1.3123 and is consolidating in the range between the 1.3113 – 1.3128.

On the front of Brexit, the leading news was that the Queen’s Royal approval had been given to the United Kingdom Prime Minister Boris Johnson’s Departure Agreement Bill (WAB). Now the United Kingdom is trying to make a trade deal with the United States and Japan before leaving the European Union.

However, the United Kingdom Chancellor Sajid Javid gave a positive statement to satisfy the industries after his previous comment about the fear of hard Brexit. He assured that the U.K. would use the power to diverge from E.U. rules only when it would be in the interest of British business.

Even after, the fears of the United States tariff cannot be decreased because the Tories Party gave permission to China’s Huawei Company to take part in 5G, whereas the Trump administration has repeatedly given notices against such action.

Moreover, United States President Donald Trump earlier warned to impose tariffs on the United Kingdom if it fines the digital service tax to major search engines like Facebook and Google.

More importantly, the European Union (E.U.) leaders are keeping the head high before the EU-UK trade discussions. The situation will continue to weigh on the risk tone. On the other hand, China’s explosion of coronavirus already gave the major shock to the global risk sentiment.

Looking forward, preliminary readings of January month PMIs from the U.K. and the U.S. will be the key to watch, whereas the recent increase in the U.K.’s earnings and CBI data have decreased the chances of the BOE’s easing. So, traders will keep their eyes on the PMIs for fresh directions.

The GBP/USD has traded sideways in the wake strong dollar and strong Sterling. The GBP gained bullish momentum on the release of better than expected manufacturing figures which hurt the BOE’s interest rate cut sentiment.

At the moment, the GBP/USD pair is trading at 1.3090 as it has violated the symmetric triangle pattern on 4 hourly charts. It seems to extend its bullish bias after retracing back to the 1.3080 level.

The GBP/USD pair may find support around the 1.3044 area today. Whereas, the RSI and MACD support the mixed bias. Let’s look for selling trades below 1.3123 and bullish trades above 1.3044.

At the data front, Japan’s core consumer price index (CPI) increased 0.7% in December from a year earlier after November’s 0.5% rise. The headline CPI rose 0.8%, bettering the forecast of 0.4% by a big margin.

The inflation data was published at 23:30 GMT but did not find a bid tone around the Japanese yen so far. Ultimately, inflation remained well away from the central bank’s elusive 2% target despite the acceleration from the previous month.

At the BOJ front, the Bank of Japan’s (BOJ) December monetary policy meeting minutes were released a few minutes before press time and repeated the need for continued easing. As well as, most bank members agreed that it was right to continue easing consistently. The central bank has been operating an ultra-easy policy for almost above seven years, so its rate cut bias has been priced for long ago.

The Japanese yen could find bids tone if the equities remain risk-averse on coronavirus fear. As of January 23, there were 830 confirmed cases in China. Whereas, the futures on the S&P 500 are currently reporting marginal gains.

The USD/JPY pair has finally violated the double bottom level of 109.850, which is now leading the currency pair towards the next support level of 109.185. Technically, the USD/JPY may find resistance around 109.850, which is the same level that provided support to the USD/JPY earlier. We can see selling below this level until 109.250. Moreover, the RSI and MACD have crossed over in the selling zone. Today, I will be looking for selling trades below 109.850 and selling above 109.250 level.