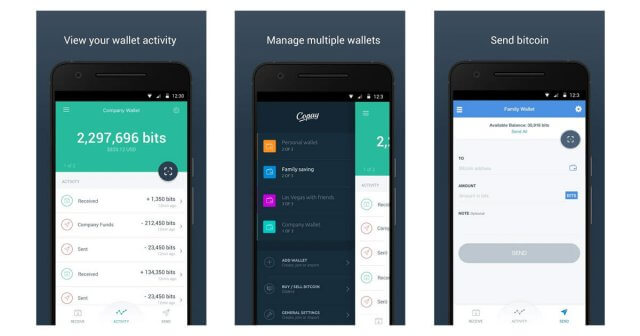 Copay was developed by BitPay Inc. and introduced to the crypto industry in 2015. Its aim? To provide Bitcoin traders and enthusiasts with a single wallet that gives them absolute control over their funds. It is free and developed using open-sourced technology and is highly versatile. Key features that make this crypto wallet highly unique include its versatility and support for multiple operating systems, the fact that it is Bitcoin-specific, light, and highly transparent.

In this Copay Bitcoin wallet review, we will be explaining these features in detail, highlighting its security features, its pros and cons, and comparing it with equally popular wallets. We will also provide you with a step-by-step guide on how to install and activate the wallet, as well as how to send and receive Bitcoin.

ii) Bitcoin-specific: Unlike most other wallets that host hundreds of cryptocurrencies and altcoins, Copay is Bitcoin-specific. This implies that you can only deposit Bitcoin and its hard fork Bitcoin Cash into your Copay Wallet.

iii) Multiple accounts: There is no limit to the number of Bitcoin and Bitcoin Cash addresses you can host on the Copay wallet. This means that, unlike most other wallets that will only host one wallet address for each cryptocurrency or altcoin, you can hold as many private keys as you wish on the Copay Wallet.

iv) Compatible with hardware wallets: Copay bitcoin wallet is also compatible with several highly-secure crypto wallets, including Trezor and Ledger Nano S.. Such integration ensures that you get to enjoy the security aspects of an offline hardware wallet and the convenience of a mobile app wallet.

During the Copay wallet installation and activation process, you will be provided with a 12-word recovery seed. Record it on a piece of paper and store it in a secure environment. Note that the seed will be needed to reset the wallet password or recover your private keys should you lose the device holding the wallet.

The Copay Bitcoin wallet is hierarchically deterministic. This means that the wallet automatically generates new public and private addresses for every transaction, which makes it hard for hackers and other third parties to track your Bitcoin transactions.

This feature is designed to guide users when making payments and prevent sending cryptocurrency to the wrong address. Technically, addresses are just a long line of numbers and letters, and often crypto users get them wrong.  BIP ensures you are sending it to the right address by helping you verify the wallet address before sending bitcoins.

A Copay Bitcoin wallet is developed on an open-sourced technology. This guarantees its transparency as it is subjected to a lot of scrutiny and vetting by the crypto and blockchain industry experts. That further enhances its security.

Copay wallet allows multiple users to use one wallet. You can think of it as a joint account where 2 of 3 parties must sign to authorize the execution of a transaction.

Copay bitcoin wallet ease of use

Copay Bitcoin wallet has one of the friendliest user interfaces. The wallet is also highly customizable and allows you to tweak such aspects as the background themes and wallet name. Both the desktop and mobile wallet apps are also multi-lingual and currently supports seven of the world’s most popular languages, including English, French, Latin, Bahasa, Portuguese, Russian, and Turkish.

In addition to the highly interactive user interface, the Copay Crypto wallet also keeps you up to date with your digital asset balances and spending. The wallet app will, for instance, send you push notifications about your crypto balances to your phone’s display. And every time you spend or transfer cryptocurrencies, the wallet automatically sends you transaction receipt on your email.

In the case of shared or group payments, Copay Bitcoin wallet will present you with an easy to understand proposal on how to split the pay.

The multi-wallet feature also comes in handy when budgeting as it lets you organize your crypto balances and allocate funds to different types of expenditures/savings. You can, for example, create a family savings wallet, personal expenses wallet, end-year vacation savings wallet, retirement savings wallet, or even the Birthday in Las Vegas wallet. This feature comes in handy for budget-conscious individuals looking to have better control over their financial life.

Interestingly, the Copay wallet is specially designed to only support Bitcoin and Bitcoin Cash. There, however, is no limit to the number of BTC or BCH private keys you can store in the wallet or the number of wallets (partitions) you can create on Copay.

If you wish to hold, trade, or invest in other Altcoins like Ripple, Ethereum, Litecoin, or Dogecoin without letting go of Copay Bitcoin wallet, we suggest that you acquire a Hardware wallet and integrate it with the Copay crypto mobile app.

BCopay Bitcoin is free. You will not be charged when you download, install, or store coins into the crypto wallet app. You can download the app from both Android and iOS app stores, on the official BitPay website or GitHub.

You will nonetheless, be charged network transaction fees every time you transfer Bitcoins and Bitcoin Cash out. These charges will vary according to the transaction volume and are collected by network administrators and not Copay.

When transacting via the Copay Wallet, you also have the choice of determining the transaction fees charged per transaction. The wallet has the ‘Super Economy’ as well as the ‘Urgently’ payment options.

Copay Bitcoin Wallet’s customer supports starts with an elaborate explanation of everything you need to know about the wallet on GitHub. On this page, you will also have access to the wallet’s updated version of both desktop and mobile apps, guidance on how to use and interact with the wallet app, and also learn everything there is to know about Copay.

For more personalized assistance, contact the Copay Bitcoin wallet team through their official handles on the different social media platforms.

How to activate a Copay Wallet

Depending on the platform you intend to use, the first step should be to register your details with the site.

After clicking on “Get Copay,” you will be automatically redirected to GitHub, where you can select your desired app to install. Select the most recent app that corresponds with your device (mobile or desktop OS) from the list and download it.

This opens the “Copay Installers” that provide you with all the important information about your Copay Bitcoin Wallet. It also hosts the registration process that captures such basic data as your name and email address.

The installer will also provide you with 12 random phrases known as the recovery seed that backs up your wallet app. Write them down on a piece of paper and keep them safe. You will need them to reset the app password or recover your private keys.

Step 5: Verify that you have captured the seed words correctly.

Confirm that you have correctly captured the recovery seed phrases.

Your Copay Bitcoin wallet is now set. You can now add Bitcoin and Bitcoin Cash crypto coins and start transacting.

How to add/receive Bitcoins to your Copay wallet

Step 1: Start by launching the app and clicking on the ‘Receive’ icon on the app dashboard. This will reveal your copay wallet address in the form of letters and a QR Code.

Step 2: Copy the wallet address and send it to the party from whom you wish to receive Bitcoins or have them scan your app’s QR code.

Step 3: Wait for the crypto to reflect on your wallet. How long the coins take to reflect largely depends on the state of the Bitcoin network.

Step 1: Start by launching your Copay wallet app. Click on the send icon and chose the crypto you wish to send. (Note that the send icon will only appear if you enough crypto to transfer)

Step 3: Enter the amounts of Bitcoins or Bitcoin Cash you wish to send

Step 4: Confirm that the number of Bitcoins or Bitcoin Cash and the recipient’s wallet address are okay before hitting send.

Copay Wallet vs. Other Wallets- How Does it Compare?

When compared to such other online wallets as eToro, Copay carries the day because of its ease of use. The app is highly customizable and allows its users to create partitions (mini wallets) that promote budgeting. It also allows you to tweak the apps theme and background colors as well as change your wallet’s name.  Plus, while Copay will only support two crypto coins, there is no limit to the number of private keys or wallet addresses that Copay can hold.

However, unlike Copay, which only hosts two crypto assets, the eToro wallet app can hold up to 700 cryptocurrencies and tokens. One may also consider eToro relatively safer as it implements more security safeguards on the wallet like two-factor authentication or military-grade encryption. Moreover, the eToro wallet app has the backing of one of the most secure and most popular crypto trading platforms. The same cant be said of Copay’s backer – Bitpay.

Copay Wallet app boasts convenience, ease of use, and its free to acquire as its key strengths when compared to the Ledger Nano S hardware wallet. Unlike Ledger Nano that sells for around $60 and has a rather complicated installation process, Copay is free to download, install, and use. The fact that the app is installed on your phone and still accessible as a chrome browser extension makes it more convenient for regular transactions.

Unlike the Copay crypto app or software wallet, however, the Ledger Nano S hardware wallet is more secure and harder to breach. It stores your private keys offline and is, therefore, more secure against online hacks or viruses that wipe off phone or desktop data. Moreover, Ledger Nano supports more than 1,000 cryptocurrencies and tokens against the two hosted on Copay.

The Copay Bitcoin wallet is relatively safe and has instituted reasonable security safeguards against unauthorized access to your private keys. They have a password mechanism to prevent, encrypt all data held by the wallet, and provide you with a 12-word backup seed.

In addition to this level of security, we liked the convenience and the versatility of the wallet given that it is compatible with virtually all the popular operating systems and is available on the move via the Copay mobile app and online via the software wallet.