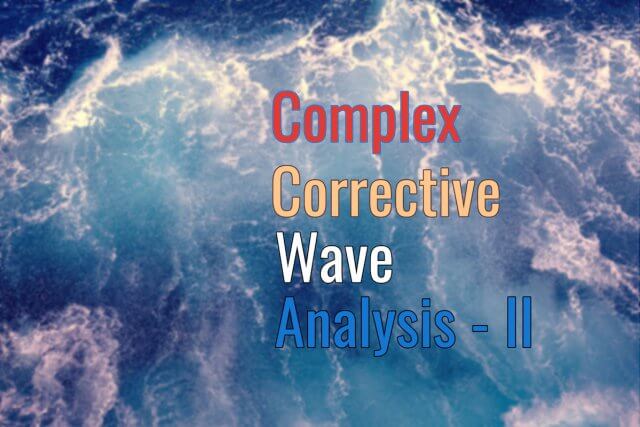 In the first part of the complex corrective wave analysis article, we presented two conditions that suggest the development of a wave x.

When the wave analyst identifies a non-standard wave, there is a high probability that the wave x is smaller than 61.8% of the previous corrective phase. This type of wave tends to take the form of an impulsive sequence. However, its internal details rule out this possibility.

The non-standard structural sequence or series may have various combinations, which are detailed below:

From the above list, the triangular formation likely corresponds to a contractive triangle. On the other hand, waves x can be other corrective waves without altering the entire structure.

The wave analyst must take into account the application of the alternation principle. In particular, the x-wave will alternate with its preceding wave. For example, if the first compact wave corresponds to a zigzag, the x-wave will be a plane or a triangle.

The following figure shows two examples of complex corrective waves that accomplish thew first condition. In particular, the case corresponds to a double zigzag, and a double three consisting of a zigzag pattern and a triangle structure.

When the wave analyst detects a complex correction in which the wave X is larger than the previous correction in terms of price, the entire formation will be classified as double or triple three patterns.

This structural series can have various combinations, which are detailed below:

In summary, the structural series of both conditions have been listed in the most likely order of occurrence.

As in the first condition, the following figure shows two cases of double three patterns.

So far, we have seen the different construction characteristics of complex corrective waves and how to differentiate each type of complex wave.

In particular, we saw the two main conditions that characterize complex corrective waves.

In the following educational article, we will present the conditions associated with each particular formation.