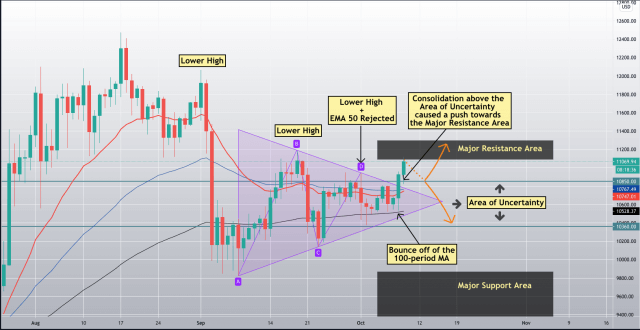 This is the BTC/USD 1-day timeframe analysis, where we are looking at the most recent events, the current technical formations, as well as discussing possible outcomes.

Bitcoin has shown some volatility in recent days after bouncing off of the 100-period moving average (black line). The largest cryptocurrency by market cap bounce off of this line as well as the $10,500 level brought a lot of bulls back to the market, causing another price swing upwards. While it was more likely that Bitcoin would push down towards $10,360, the news surrounding it (many accredited and institutional investors putting their funds in the market at this particular moment) outweighed the bearishness caused by the macro events.

Bitcoin has been building a triangle formation for over a month now, and it was a consensus among analysts and traders that the triangle will most likely break towards the downside. However, the most recent push off of the 100-period MA (mostly due to fundamentals rather than technical factors) has proven traders wrong and decided Bitcoin’s short-term future.

The push towards the upside briefly stopped after breaking the uncertainty area, only to consolidate there and create enough pressure for the next move. After this happened, Bitcoin was free to move towards the $11,000 resistance level . At the moment, the pressure created by the bulls is fading, and we may expect a pullback.

If we are talking about straightforwards pushes towards the upside or downside, it would take a great deal of pressure to either side to break its support or resistance levels, sitting at $10,850 and $11,300.