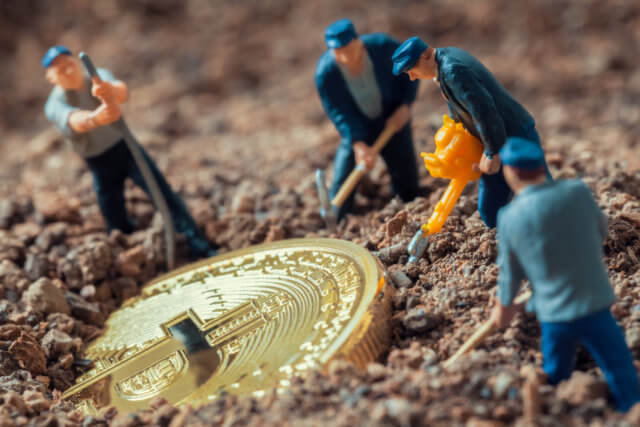 There is a significant difference in how cryptocurrencies and fiat currencies are generated and issued to the ecosystem. Fiat currencies are created and printed by the government bodies in response to orders by the state authority. At the same time, cryptocurrencies are issued to the public by going through the blockchain network according to a preset algorithm. There are different schemes assigned for mining, such as the Proof of Work, Proof of Stake, Proof of Authority, etc. These are referred to as consensus algorithms. The in-depth working of these processes is complicated. So, we shall stick on the basic working of it.

Cryptocurrency mining is the procedure to bring up new coins into the current flowing supply, by verifying the coins through a system. The ones that mine these coins are called miners.

Procedure to Mine Cryptocurrency

Mining is a complicated process. Each day, miners commit a thousand watts of electricity towards mining cryptocurrencies. People mine coins though it is an expensive process because they receive a good number of Bitcoins for it, which has value in various markets.

As mentioned above, the reward is released to the miners when they successfully solve a block in the blockchain. The compensation received is pretty decent; in fact, it compensates a thousand watts of electricity. Having that said, the reward cannot be very high, as it could cause an oversupply in the market and depreciate the value of the currency.

Supply and Demand of a Cryptocurrency

Buying and selling cryptocurrencies is different from buying and selling of stocks, bonds, etc. Also, unlike investing in traditional currencies, cryptocurrencies are not issued by the central banks. Therefore, the monetary policy, inflation rates, and other economic factors do not apply to the cryptocurrencies. They are influenced majorly by factors such as the supply of the coins and the demand for it, the number of competing coins, and also the exchanges it trades on.

The supply of cryptocurrencies is impacted by the cryptocurrency protocol, which permits the creation of a new coin (same type) at a fixed rate. A number of coins are introduced into the market when miners verify the blocks of transactions. And the rate at which these new coins are introduced is designed such that it slows down over time. This is done to create a scenario in which the demand for coins increases faster than the supply, which hence causes the prices to shoot up.

Hence we can say that mining & miners have a crucial role in maintaining the supply & demand of any cryptocurrency!