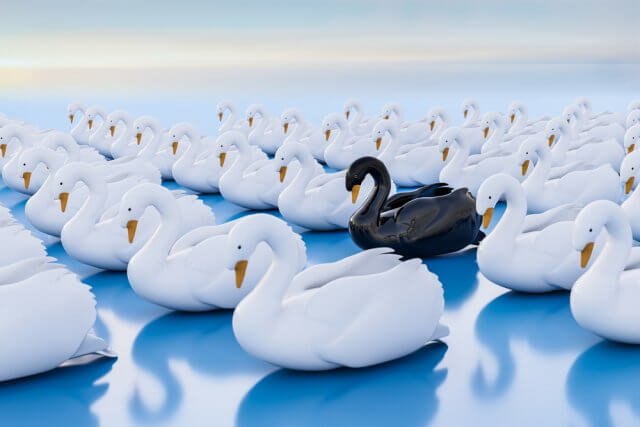 The cryptocurrency is a domain where there are several varieties of critics. And most of them have a negative sentiment on it. There are financial bears who do not have a positive outlook on cryptocurrencies in the long term. Then there are techies who believe that blockchain, not a technology that is going to give a breakthrough to the current technology. There are also government mongers who are fearful and anxious about investors grabbing their interest in cryptocurrencies, which would drop their tax money.

Then we have a black swan event, which is a different case altogether. A black swan event for Bitcoin or any other cryptocurrency, for that matter, is the absolute worst-case scenario that could take place.

Why is it necessary to consider the possibility of Black Swan scenarios? If the FUDsters give a healthy level of condensing for the market as a whole, the black swan forecasts are like a rototiller. Their job is to assume that the market is going to collapse anytime soon and is required to stay away or look for other options. If such a thing is inevitable, it is useful to know what to expect.

Here are a few worst-case scenarios that cryptocurrencies could affect. Before getting right into it, first, let’s start off by understanding what a black swan event actually is.

This was described by a financier and author, Nassim Nicholas Taleb, while he was writing about the 2008 financial crises. Taleb referred to the Black Swan event as a completely unpredictable beforehand consequence, which is devastating.

Taleb also pointed out that the black swan event is a relative concept. This event may not be a terrible scenario for everything equally. It can be localized as well, where one market’s black swan could be another’s market’s bull booster. For instance, the failure of cryptocurrency and blockchain could give more room space to other technologies and financial sectors.

We have listed out some examples which would be torn apart the cryptocurrency space – and not necessarily shake the other related sectors.

Bitcoin and other cryptocurrencies currently operate in a very legal state at the moment. In the U.S. and many other countries, there have been tentative steps regarding the management of cryptocurrencies. The U.S. Securities and Exchange Commission has not confirmed whether cryptos are securities on a case-to-case basis.

However, the bomb hasn’t been dropped yet. There could be a moment where the countries like the U.S. and South Korea simultaneously decide that the cryptocurrencies would be banned outright. This would hit the entire crypto market really bad.

Cryptocurrencies are virtual currencies that are hardcoded. So, there is a possibility of a bug being found and exploited in the code. As a matter of fact, recently, a malicious attack happened to Verge, which allowed hackers to mine extremely easy blocks and extract off millions of dollars of the coin. Also, 51% of attacks can be carried out easily out of smaller coins that were discovered.

However, such a thing is unlikely to happen to the cryptocurrency giant, Bitcoin. But the Quantum Computing has something dissimilar to say: “The massive calculating power of quantum computers will be able to break Bitcoin security within ten years, say security experts.” Still, Bitcoin has proven itself countless times that it is resistant to attacks. Either way, a solution of the same would reach before it becomes possible.

Going by the definition, Black Swans are harder to identify ahead of time. They are also an event that could be devastating to the market. As the author Taleb says, it is like a variation of the “prepare for the worst” mindset. Though there is still enthusiasm and forecasted potential in the cryptocurrency space, it is also vital for such optimists to have their end on the negative side of it. After all, the cryptocurrency always proves to be a perfect example of “expect the unexpected.” All The Best.