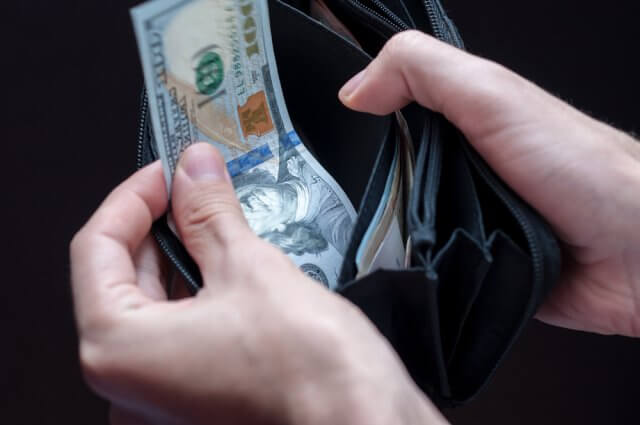 Personal Spending makes up one half of Consumer Spending. As consumer spending drives total GDP, tracking Personal Spending patterns and changes can help us better understand the direction of the economy’s health.

What is Personal Spending?

In other words, it refers to the money paid for goods and services by the general public. The products and services can include all that we, as an individual, consume to live our lives. The groceries, the movies, the savings, the internet bills, phones, etc. all these are part of our lives that the Consumer Spending measures. Personal Spending in this regard is the more specific component of Consumer Spending.

PCE also includes purchases by military personnel stationed abroad, regardless of the duration of their assignments, U.S. government civilian, and by U.S. residents who are traveling or working abroad for one year or less.

BEA releases the PCE report in the last week of the month for the previous month. Quarterly and Annual reports, Seasonally adjusted versions of the same, along with Personal Saving Reports, are all available under the release titled “Personal Income and Outlays.”

Personal Spending is one-half of the Disposable Personal Income (the net amount left after all tax payments from the gross income), and it includes the necessities and personal expenditures. Hence, some may refer to Personal Spending to the expenses incurred by money spent on personal enjoyment like going to Restaurants, Trips, buying jewelry, clothing, movies, gaming, concerts, etc.

In this sense, Personal Spending takes a hit during job loss, tight monetary conditions, or recessionary periods as people cut back on personal comforts and tend to save more for the future. Decreased Personal Spending is not a  good sign for the economy as it withdraws money from the system and stays in people’s bank accounts or pockets only.

The correlation between Personal Spending and the GDP of a nation is strong. As we can see below, during recessions, the GDP and PCE (Personal Expenditures Report)  flat out from their usual and trend sideways or downwards (during more extended recessionary periods), otherwise steadily increase at the same pace.

How can Personal Spending numbers be used for analysis?

Investors can also monitor the Personal Spending sections of the PCE report and determine the spending patterns of people and predict sectorial growth or slowdowns. For example, a few decades ago, the service sector was not as dominant as it is today. Today about 64% of the expenses go towards services. This change in trend is easily observable through PCE. Through PCE, we can predict which markets are likely to see a boom or slowdown.

For illustration, see the below graphical representation extracted from the BEA official website, of the primary services that people are spending their money on. HealthCare and Housing Utilities make up a majority of the services that are chosen by people when compared to other services like Transportation, or Recreation. Such analysis is very useful for investors and stock traders to assess the industrial performance of different goods and service sectors. 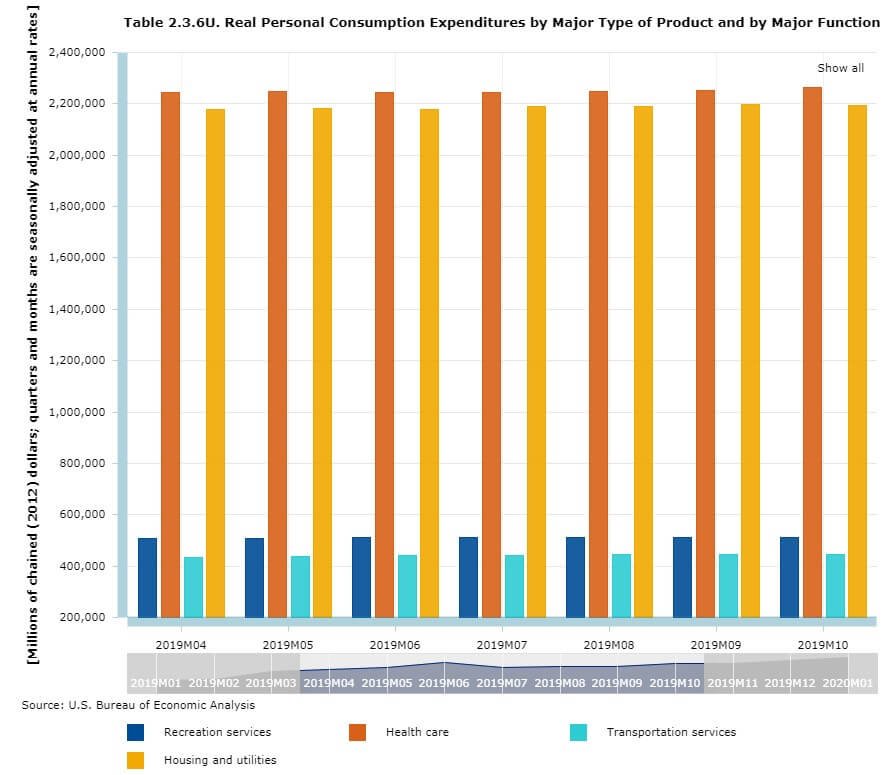 Personal Spending is a mild impact indicator as the retail sales figures precede the PCE monthly reports where similar tradable conclusions can be drawn as that of PCE reports. A healthy and growing economy would be reflected in the Personal Spending numbers as the people make up the economy. It is important to remember that Personal Spending is a reflection of the present financial situations of the population and hence only shows what the current economic status of the nation is.

It is a coincident indicator in this sense and is dependent on macroeconomic factors like the government’s policies, Quantitative Easing, inflation, etc. which direct the money flow. Hence, it is the effect in the cause-and-effect equation. It reflects the results of an action rather than the act itself.

Impact of the ‘Personal Spending’ news release on the price chart

Now that we have a clear understanding of the Personal Spending economic indicator, we will now watch the impact of the indicator on the value of a currency. As Personal Spending measures the change in the inflation-adjusted value of all Spending by consumers, it accounts for a majority of overall economic activity. This report tends to have a mild to severe impact on the currency.

The below image shows the previous, forecasted, and latest Personal Spending data of the U.S., which is announced on a monthly basis. It is published by the Bureau of Economic Analysis and is the authoritative agency that conducts surveys across the country. A higher than expected reading is considered to be positive for the economy, while a lower than expected reading is considered to be negative. Let us examine the reaction of the market for the latest release.

We will start analyzing the impact of Personal Spending data on the USD/JPY currency pair, where the above image shows the state of the chart before the news announcement. It very clear that the pair is in a strong downtrend, which means the U.S. dollar is extremely weak. One of the reasons behind weakness in the U.S. dollar is that the market participants are expecting lower Personal Spending figures for the month of February. At this point, aggressive traders can take ‘short’ positions in the market, owing to pessimism in the market, with a stop loss above the recent ‘high.’

After the Personal Spending data is released, the market as expected goes lower, and volatility increases on the downside. The actual data came out to be lower than the forecasted data, and this made traders to further sell the currency pair. We can say that the poor Personal Spending data accelerated the downfall and took the currency much lower. This is the ideal and risk-free situation when it comes to taking a ‘short’ trade. Thus traders can sell the currency pair soon after the news release and have a much higher ‘take-profit’ as the indicator has a severe impact.

The above images represent the USD/CHF currency pair, where the behavior of the chart appears to be a little different from the previously discussed pair. A similarity in both the pairs is that the major trend is down. But here, the price has shown some signs of reversal before the news announcement. This could even possibly turn into an uptrend. As the volatility is high on both sides, it is advised not to carry positions in the market before the news release. One could even face issues such as high spreads and higher mark-to-market loss.

The news announcement resulted in a sudden price drop, and the market reacts negatively to the Personal Spending data. Thus the market here too gets bearish due to poor news data. As one does not see any trend continuation candlestick patterns after the news release, he/she shouldn’t be going ‘short’ in the market right after the announcement. Only after one sees such patterns, he/she can enter the market.

These are the images of the AUD/USD currency pair, where the characteristics of the chart are totally opposite from the above two pairs. Since the U.S. dollar is on the right-hand side, a down-trending market would mean strength in the U.S dollar. Therefore in this pair, the U.S. dollar is extremely strong contrary to the above pairs where it was extremely weak. When the volatility is so high on the downside, it is less certain that an even a negative news outcome can result in a reversal of the trend.

After the news announcement, the market moves a little higher, almost negligible, owing to bad Personal Spendings data of the U.S., but this gets immediately sold, and the ‘news candle’ closes with a  wick on the top. Therefore, we can say that the Personal Spendings data did not have a significant impact on this pair, and volatility increased on the downside.

This completes our discussion on Personal Spending and the impact of its news release on the Forex market. If you have any queries, please let us know in the comments below. Cheers.