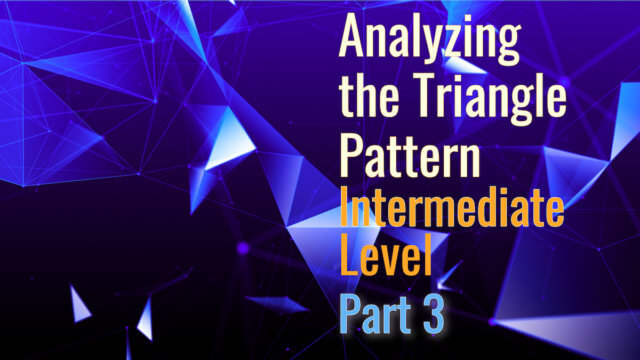 – Channeling. In the case of the non-limiting triangle, the trend lines are not convergent but divergent.

1. Congestion occurs just at or near the apex of the convergence lines. 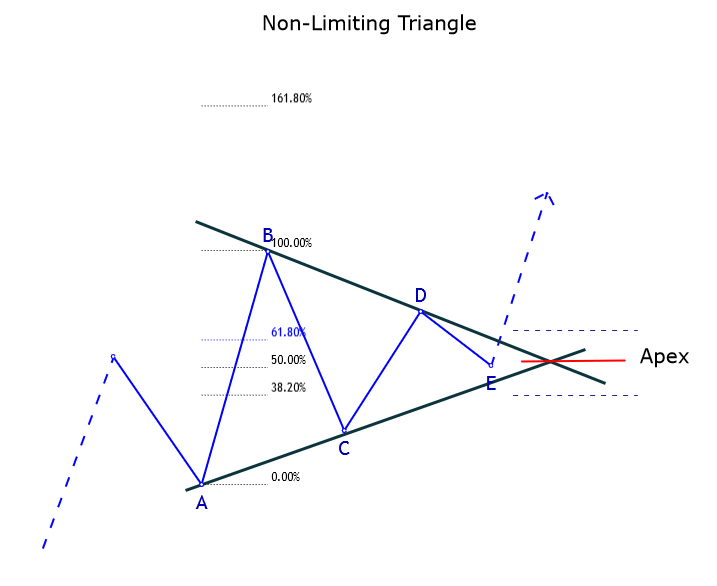 The wave analyst should note that the term “just or near the apex” refers to the end of wave E being close to the intersection of both trend lines and the extent of wave E to be measured in terms of the time spent in the triangle formation.

b. The triangle pattern is considered Non-Limiting if the measurement of time elapsed from its beginning until the end of wave E, and the apex occurs after 40% of the interval has passed.

c. There must be a post-thrust correction that must return to the apex area.

If the triangle met any of these three conditions, then the triangle will be said to be of the non-limiting type.

The distance of the thrust outside the limits of the non-limiting triangle does not have a specific restriction. However, it can reach the length equivalent to the longest segment of the triangle.

Likewise, once reached this extension, there is a possibility that the price will continue in the original direction of the thrust.

Expanding triangles are very frequent in complex corrections. It is characterized because as it progresses in its formation, each segment, or the majority, is larger than the previous one.

The rules that characterize the expanding triangles are described below:

The following figure shows the three most common types of expanding triangles, of which the irregular is the most likely to appear in the real market.

In expanding triangles also exists limiting and non-limiting triangles. However, in this type of formations, there is no post-triangular variation between one and the other. The difference lies in the wave position that the triangle holds, which can be “standard” or be part of a complex correction.

The term “limiting” refers to whether the triangle is a fourth wave or a B wave. Its main characteristics are described below.

1. An expansive limiting triangle usually appears in wave B, particularly in irregular failures or in flat wave formations with failure in wave C.

2. The thrust outside the triangle is a minimum of approximately 61.8% of the structure, measured from its highest to the lowest level.

This variation rarely appears in the real market. However, this does not mean that there is no possibility of it showing up in real markets.

The main characteristics of a horizontal triangle are:

1. Wave A must be the smallest of the formation.

2. Waves B, C, D, and E y must each exceed the final point of the previous wave.

3. There is a possibility that wave E will exceed the guideline of waves A-C.

This variation is more common, and its characteristics are as follows:

1. Wave B is smaller than Wave A, while the rest of the waves maintain their increasing characteristics.

2. The longer the duration of the pattern, the higher the chance that the guideline will tilt up or down.

This expanding triangle has a bias due, on the one hand, because wave B is longer than wave A, and on the other hand, because wave C is the shortest. The E wave, meanwhile, can be more volatile or “violent” than the rest of the waves. 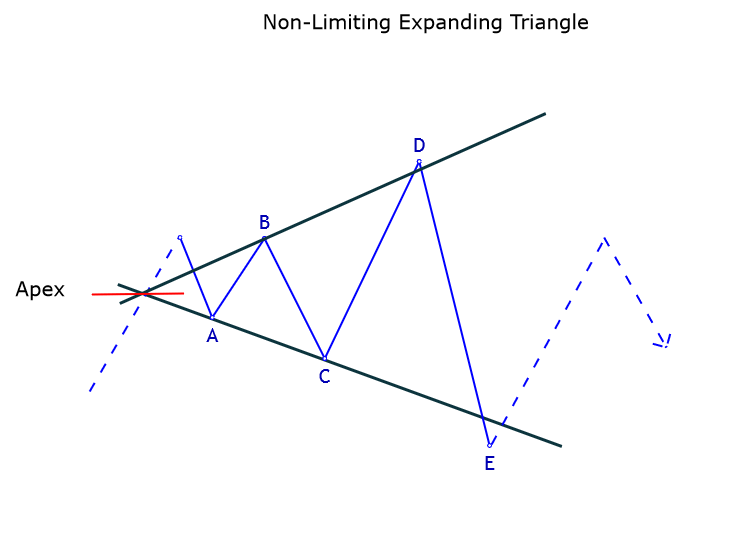 Finally, concerning the apex, it is located before wave A and must be produced before it reaches 20% of the construction time of wave A.

With this article, we have ended the standard corrective patterns defined by the Elliott wave theory. As we have seen in previous examples, expansive triangles also usually appear on waves 4 and B. However, this does not mean that they cannot appear on wave 2.

In the next educational article, we will see the process of validating impulsive structures.