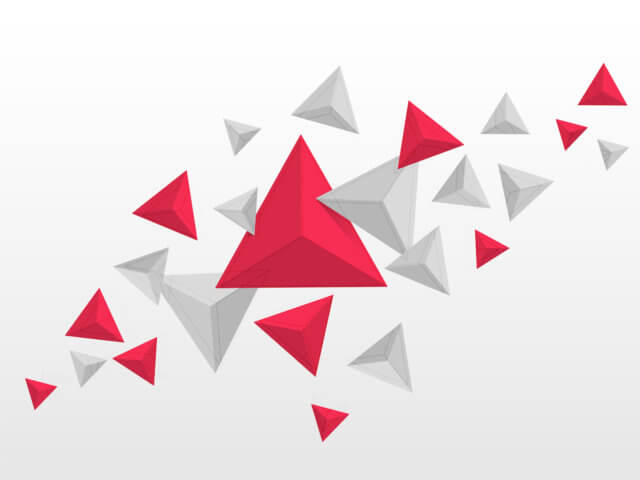 In our previous article, we saw that the triangle pattern is the most common of the three standard formations defined by R.N. Elliott. In this educational post, we will review the different types of variations of this corrective structure.

Within the group of triangles, this formation is the most common of all. The minimum requirements of this structure are:

1. Once the contractive triangle is completed, the price must make a “thrust” that should be greater than or equal to 75% of the largest internal segment. On the other hand, this movement should not exceed 125% of the most extended triangle segment.

The following figure shows two cases. In the first, we see that wave A is the most extended segment of the contracting triangle after wave E is completed. The thrust can reach between 75% and 125% of wave A.

In the second case, we observe that wave B is the most extensive of the contracting triangle. Analogously to the previous case, we distinguish that the thrust made by the price should not be less than 75% nor greater than 125 of wave B.

2. In this type of triangle, the thrust must further exceed the highest (or lowest) end it reached during structure formation.

In other words, when the contracting triangle is about to be completed, two parallel lines should be drawn over the most extended segment, depending on which side the thrust is on, the price should touch the top or bottom line. 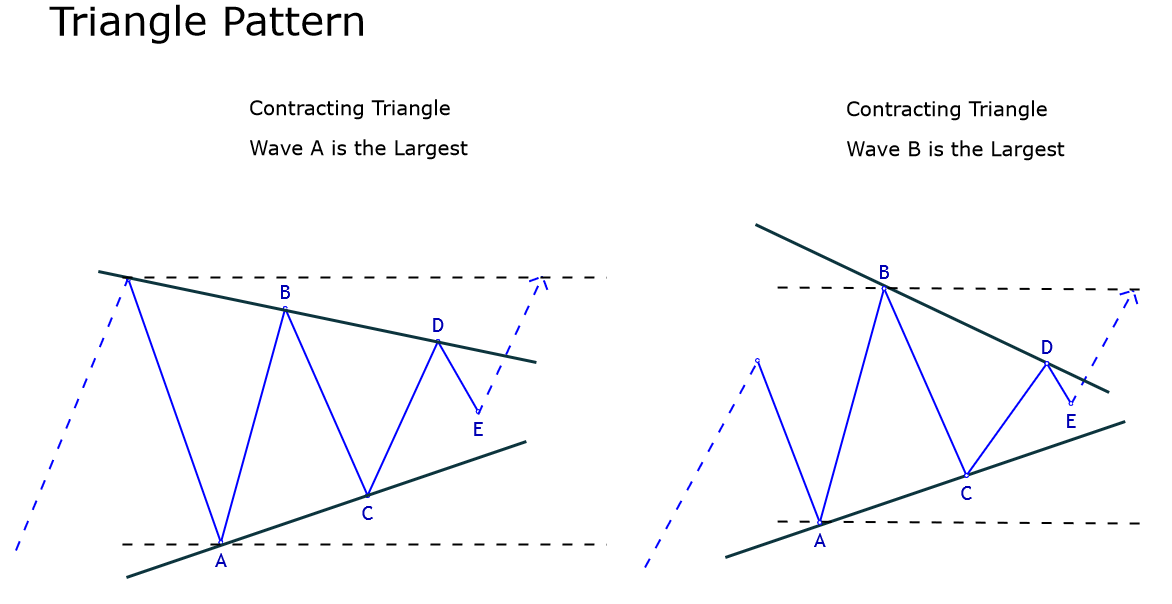 3. The E wave must be the smallest of all the segments of the triangle in terms of price.

As we observe in the following figure, the internal segment corresponding to wave E must be the smallest of all in terms of price, but not the time it takes for this movement to complete. 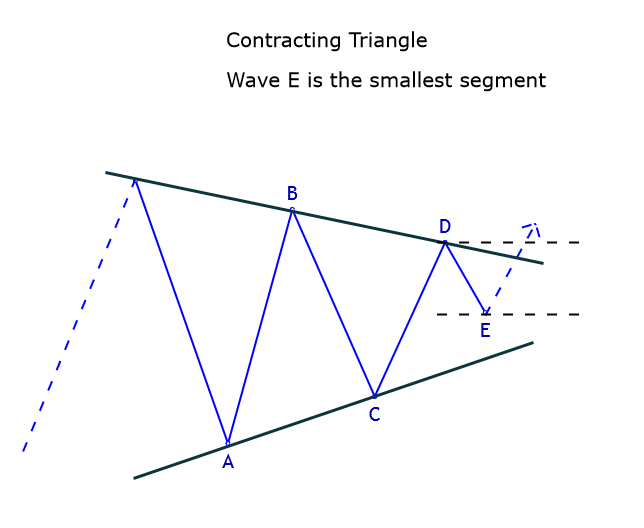 R.N. Elliott defined the limiting triangle as a formation that occurs in the waves fourth and B. Its name is because its completion must occur under specific conditions,

The completion of the limiting triangle in wave E must happen in the range of 20% to 40% before the apex point of the triangle.

1. The trendlines of the triangle must move in opposite directions.

In other words, when drawing the ends of the triangle corresponding to the end of waves A-C and B-D, the trendlines must correspond to a contracting triangle respecting the basic structure defined by Elliott. 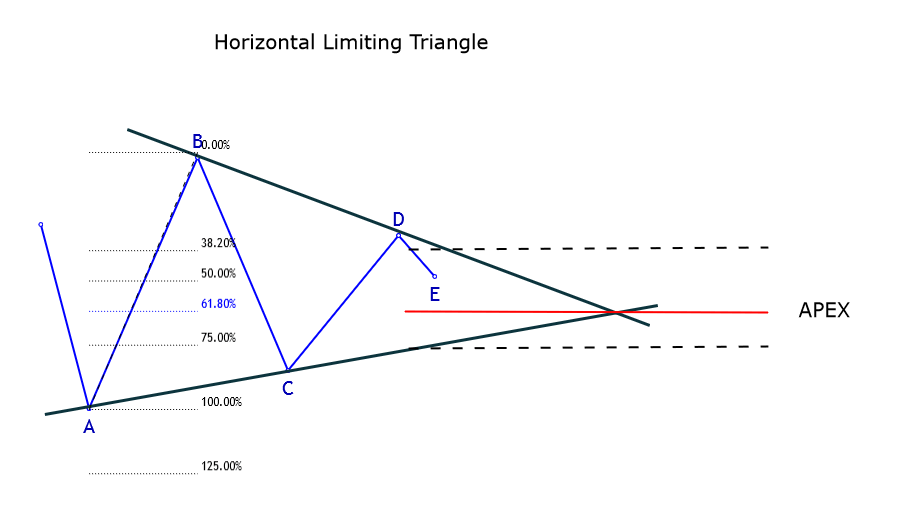 2. The apex of the triangle must be within a range whose amplitude is 61.8% of the most extended segment of the triangle and whose center is the midpoint of that segment.

In the case of the previous figure, the most extended wave is wave B. However, this is analogous for the situation in which wave A or wave C is the longest in the triangle.

This type of triangle must perform a higher thrust and with greater speed than in the case of the horizontal triangle. The distinctive element of this formation is wave B, which must be longer than wave A. In general, its main characteristics are as follows. 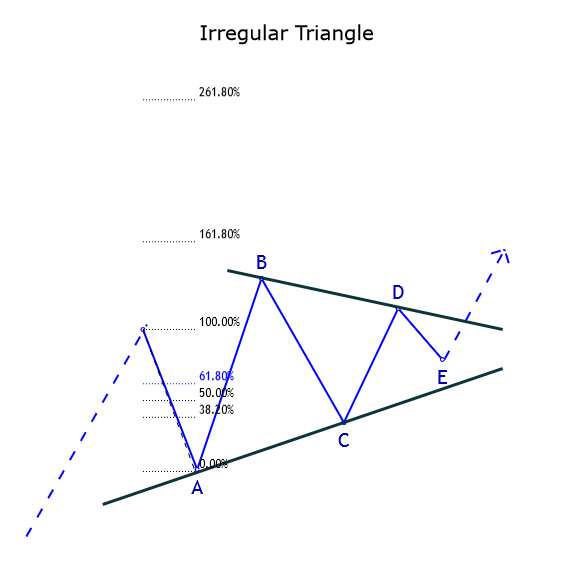 This type of wave can be confused with the Double Three corrective structure. Its main characteristics are: 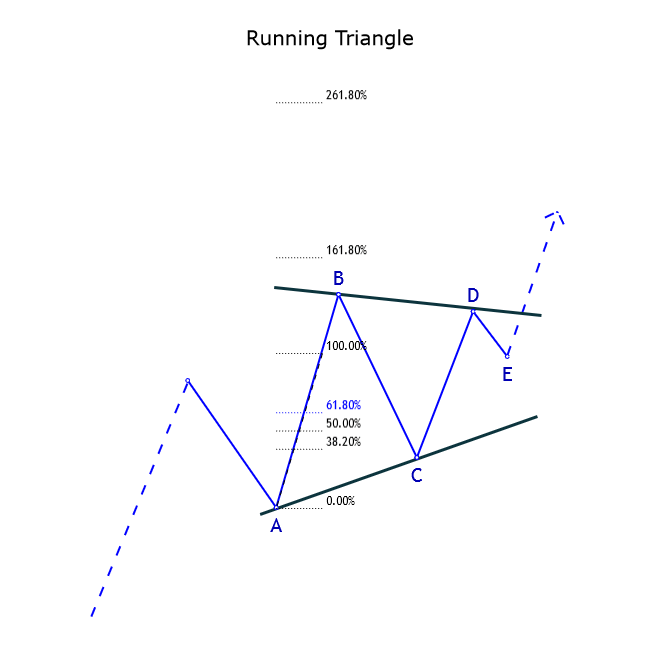 In this educational article, we have examined the different variations of triangles and expanded their contracting variants. We must emphasize that its importance lies in the fact that this type of formations, in particular, the contracting triangle, is the most common of all triangular patterns. The knowledge of how triangles behave can provide the wave analyst with an advantage that would allow him to more accurately predict what the next market move would likely be.

In the next article, we will see the last part of the corrective formations. In particular, we will review the non-limiting triangles and their main characteristics.