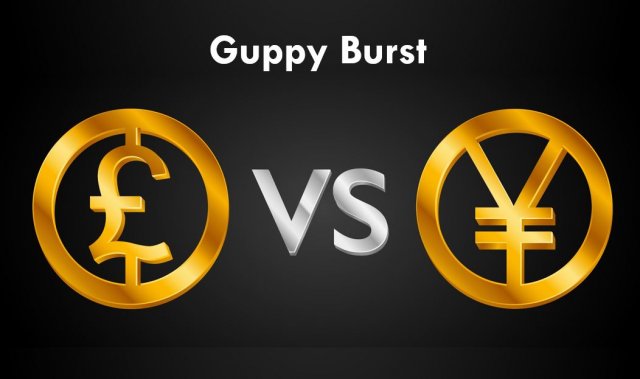 After discussing some of the intraday and long-term trading techniques, we will now focus on very mechanical trading strategies. The strategies discussed previously were time-driven, which means each strategy involved several parameters.

This style of trading is suited to newbies because it is purely based on a fixed set of rules and steps. Due to its non-dependence on rules specific time frames, the strategies we will be discussing span over three different categories: scalping, day trading, and position trading.

The guppy burst strategy works well on the 5-minute time frame. This means each candle represents 5 minutes of price movement.

This strategy is based on pure price action; hence, no indicators are required for this strategy.

This strategy applies only to the GBP/JPY currency pair.

Similarly, we will place a pending sell order at the support of the range with a stop loss at the resistance. This might appear opposite for some traders who are well versed with the support and resistance strategy. The reason behind buying at resistance and selling at support is that, as soon as the Asian market opens, the market starts to trend in the same direction of the current move. This means we are anticipating a breakout or a breakdown of the range.

We will have two take-profit points in this strategy. The first profit target is set at risk to reward ratio of 1:1.5, while the second one is at 1:2 risk to reward. By this, we ensure that we lock in some profits and don’t lose when the trade goes against our favor.

Since the time zone of the trade very important here, we need to mark the reference candle for the strategy. It is the one that corresponds to 5 PM New York time, which is nothing but the closing time of the U.S. market. As mentioned earlier, the strategy is applicable only to the GBP/JPY currency pair. Here are the steps of the guppy burst strategy.

The first step is to open the chart of the GBP/JPY currency pair and then wait for the U.S. market to close. Mark this as the reference candle, and from here, the analysis of the chart begins. We need to analyze the pair on the 5 minutes candlestick chart. The below image shows an example of such a trade setup on the GBP/JPY pair. Here we see that the market is an uptrend and recently has formed a range.

Next, we need to identify a ‘range’ where we have at least two points of support and resistance. We have to assure that the market does not start moving in a single direction after the U.S. market closes. If it does, then the strategy is no longer valid. However, the market mostly remains sideways after the U.S. session. Depending on the market’s major trend, we place a limit order at support and resistance. If the major trend of the market is up, we place the ‘buy’ limit at the resistance, and if the major trend is down, we place the ‘sell’ limit at the support.

In this step, we do not have to do anything, but just wait for the market to hit our limit orders. At the same time, if our limit order is not triggered, we should leave the market as it is and not chase it. This is an important part of risk management.

In the below image, we see that our ‘buy’ order gets triggered a few minutes after the opening of the Asian market.

The below image shows how the market continues to move upwards and starts trending after the breakout from the range.

As we are not sure when the breakout will happen, the best way to enter the market is by creating a pending order on the extreme ends of the range. The important part is the identification of the range during the three-hour window between the U.S. market close and Asia market open. Along with that, make sure to place a limit order in the direction of the market.