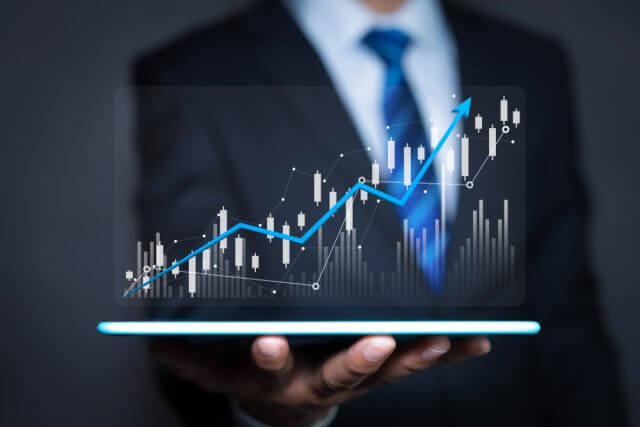 In the previous article, we discussed the 123 patterns as a confirmation sign for the end of a trend. However, while the 123 top and bottom are a great entry method for taking reversal trades, it is observed that most of the time market moves in a trend that requires us to get into the trend in the middle of it. We have heard that ‘the trend is your friend,’ so now we will learn a method to get into a trend using the 123 trend continuation pattern.

Sometimes, one might miss out on the start of a new trend, for which we need a method to enter the confirmed trend during its progress. In today’s strategy, we will discuss one such method of entering a trending market using the 123 patterns for trend continuation, also called internal 123.

An interesting feature of this strategy is that it can be used on all time frames. One needs to comprehend the strategy very well before trying out this on extremely small time frames, such as 5 minutes or 1 minute.

No indicators shall be used in this strategy. However, the Simple Moving Average (SMA) can be used to identify the major market trend.

The strategy’s basic concept is the continuous identification of 123 points in the direction of the new trend. The initial 123 points are identified in the same way as was identified in the previous section, and subsequently, the same pattern is identified as the trend advances. In this strategy, we will be attempting to catch the trend at the second or third appearance of the pattern. Since we are joining the trend after the move has started and it is in the middle, we cannot expect a large risk to reward ratio. This means the risk to reward of trades using this strategy varies anywhere between 1 to 1.5.

One should be careful while using this strategy for trend trading since most traders end up taking late entries that result in a loss. The strategy cannot be applied when the trend is very much evident on the chart and has reached the end of it. The trader can gauge this through experience and practice. Let us understand the step by step procedure of the strategy with the help of an example.

In order to explain the strategy, we have considered the GBP/CAD currency pair where will be analyzing the chart on the 4-hour time frame. In this example, we will be looking for ‘short’ trades by identifying a suitable 123 pattern in the currency pair, with the downtrend being our major trend.

The first step of this strategy is only a recap of the previous strategy. It involves identifying the reversal of a trend by marking the 3 points and confirming the reversal of the trend. As we can see in the below image, we have marked all the points on the chart and identified the formation of the 123 patterns at the end of an uptrend. 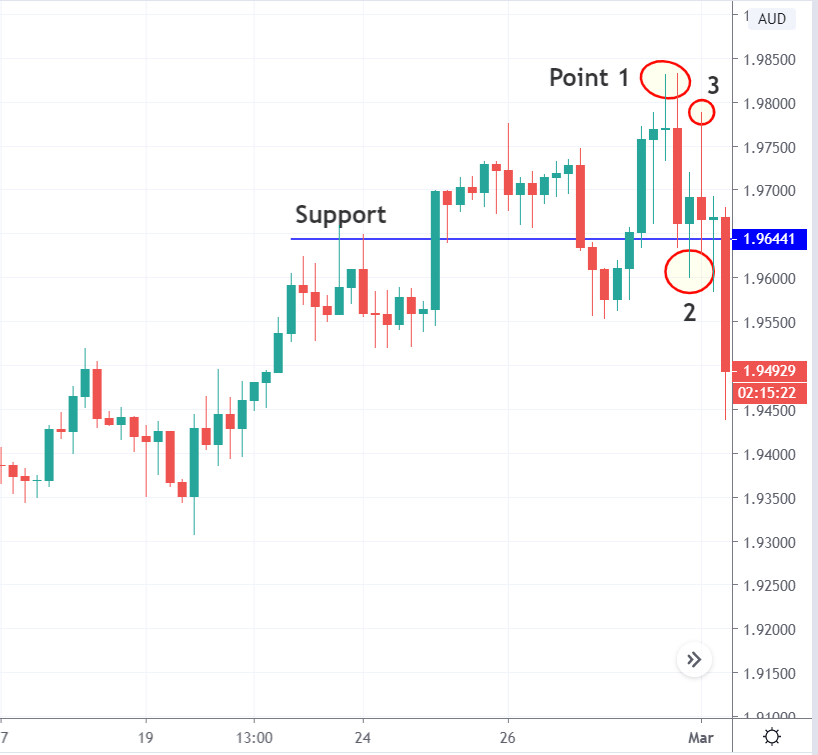 This is the crucial step of the strategy, where we only need to repeat the steps that were followed earlier to plot points 1, 2, and 3. The previous lower high or higher low becomes our point 1, the new support or resistance level from where the market reacts becomes 2nd point, and finally, the price that is between new point 2 and 3 from where the market starts moving in the direction of the new trend is the 3rd point.

If we carefully observe, point 3 of the previous step is our new point 1, labeled as 1′ in the below image. The new point 2 is labeled as 2′, and 3′ is our 3rd new point. In the example, we will be entering for a ‘short’ somewhere in the middle of the downtrend and not too late or too early. 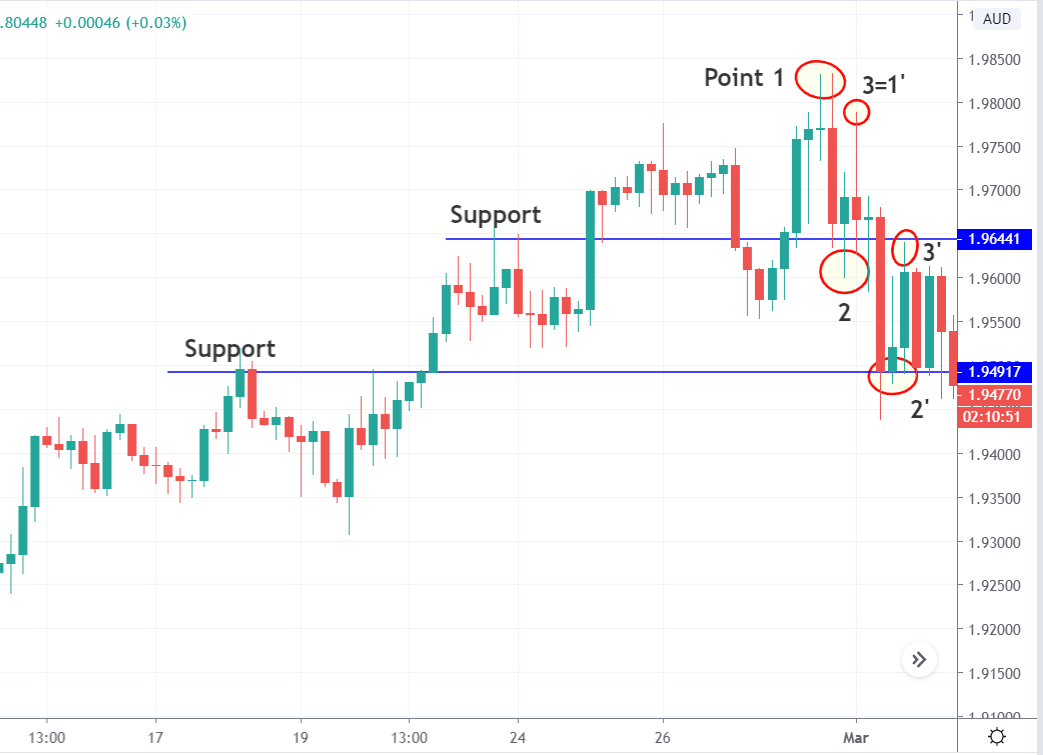 In this step, we enter the market with appropriate position size and risk evaluation. The entry is the simplest part of the strategy, where we enter the market right at the break of the support or resistance level. This level is nothing but our 2nd point. 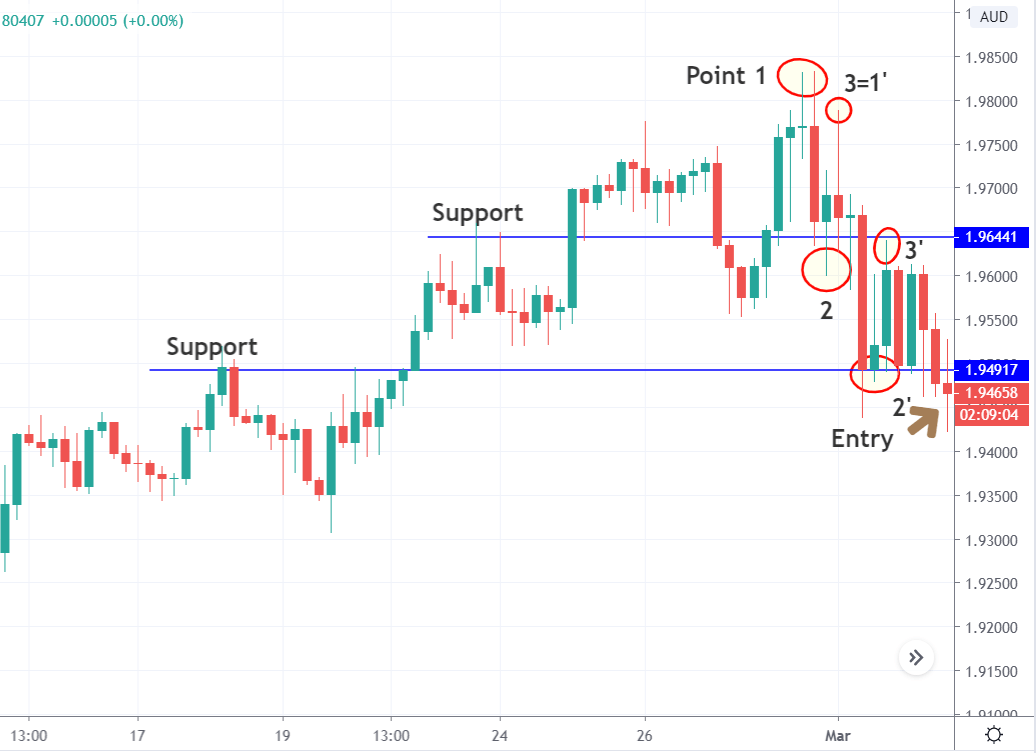 In this, we determine our take-profit and stop-loss levels for the strategy. As mentioned in the earlier section of the article, the risk to reward ratio will be lower as we are entering the middle of a trend. The stop loss is placed at the 3rd (3′) point, and the take-profit should be at the recent support or demand area that is a hurdle for the down move. 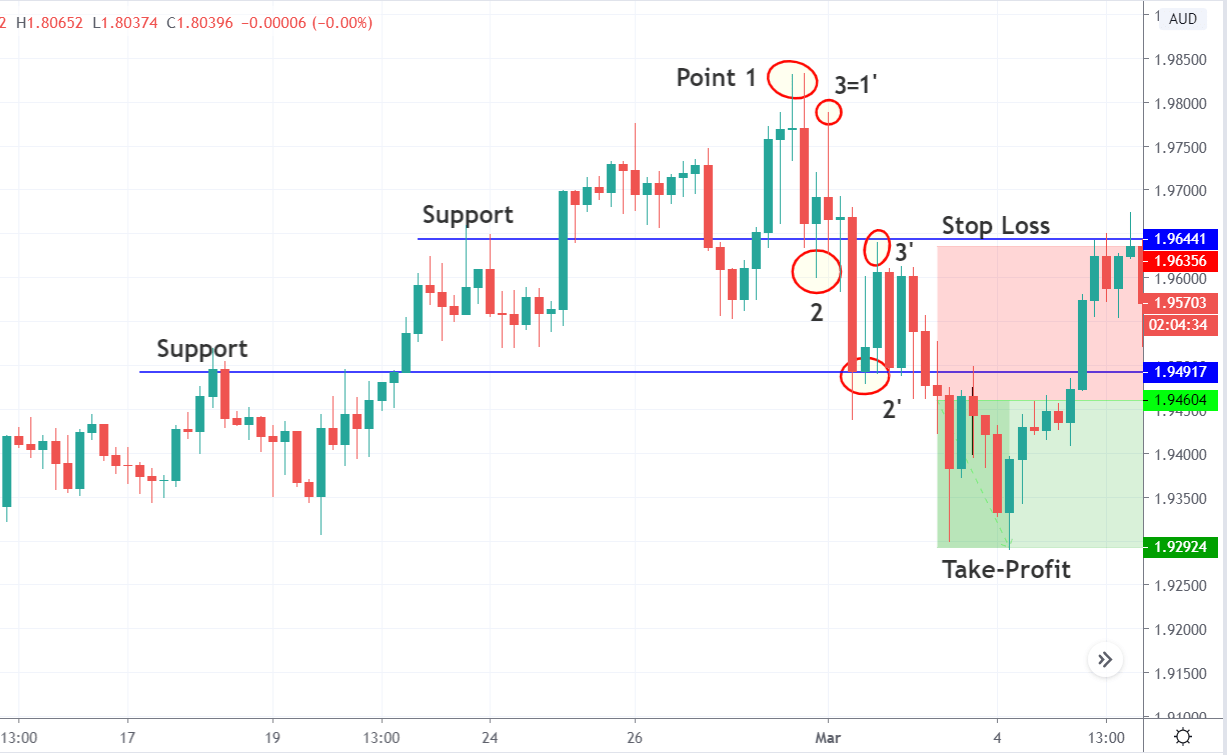 This strategy is only an extension of the previous strategy, where we apply the same rules and steps once again. The difference is that the risk to reward ratio is lower, but we make sure that we are trading with the trend, which puts us in a safer position. Do not apply the strategy again on the same trend.