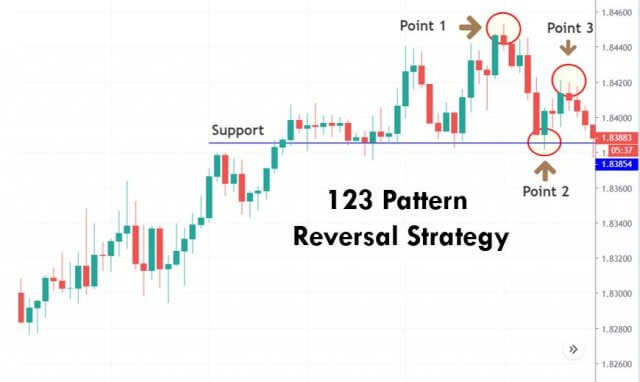 Strategies that we discussed in the previous set of articles were based on indicators and price action patterns. We are going into the trading strategies, where we will combine popular candlestick patterns and price action. The next two articles will discuss the 123 patterns as a reversal trading strategy and continuation trading strategy. First, we will look at the 123 pattern as an indicator of the end of a trend and also a market reversal. Hence, it is also known as the 123 top and bottom pattern.

The 123 top and bottom is a very powerful pattern that signals a reversal of a trend. It is also used as a trend continuation pattern, which we will be discussing in detail shortly. First, let us discuss the 123 patterns as a reversal trading strategy.

As mentioned earlier, in this strategy, we will not be using any technical indicators. The only prerequisite of the strategy is to have a clear understanding of the 123 patterns before reading about the strategy.

The strategy is suitable for trading in all currency pairs. However, it is suggested to look for the trading opportunities in major and few minor currency pairs only as the patterns are more reliable and evident in these pairs.

The strategy begins by identifying three main points. For example, in an uptrend, when the market hits a new high, label that point as 1. We then wait for the price to pull back to a short-term support area. This point is labeled as 2. Finally, when the price moves up to an area between points 2 and 3, we label this as point number 3. We then take an entry at a suitable location, which we will address in the later part of the strategy.

The pattern is complete when the price stays below point 2. The strategy is to sell the currency pair on the break of point 2. The take-profit of the strategy is placed at a point that results in a 1:2 risk-to-reward ratio. The stop loss is put just above point 3, whereas a more conservative stop loss is placed just above the move, in order to maximize the risk to reward. The trader will be able to make this choice by trading the pattern again and again. Let us understand the step by step process of the strategy.

In order to illustrate the strategy, we have considered the GBP/AUD currency pair, where we will look for ‘short’ trades by identifying the 123 top patterns. In this example, we are applying our strategy on the 15 minutes time frame and during one of the major trading sessions.

The first step of the strategy is to look for point 1, which is essentially the highest point of a trend. The criteria for selection of point 1 is that the market should reach it’s previous low or high twice before it starts moving lower or higher.

In our example, we can see that the previous lows have been tested multiple times, and thus we have chosen the highest point as our point number 1.

The next step is to mark the point number 2. When the market pulls back to the recent support or resistance area after reacting from point 1, we mark this as point 2. Remember that the price should not only reach that area but also react and move higher (for uptrend) or lower (for downtrend). This confirms the key technical level.

The formation of the 123 pattern is complete after identifying the third point. When the market moves in the area between points 1 and 2 and later comes goes back to point 1, the point from where the market reversed becomes our point 3. Now the next step of the strategy is discovering the ‘entry.’

In this step, we will be discussing the ‘entry.’ There are two ways of entering the market in this strategy. The first one is an aggressive way to take an entry on a break of point 2, and as the market starts moving in that direction. Traders who are confident about the pattern and have belief in the market can opt for such an ‘entry.’ The second one is a conservative approach where one takes an ‘entry’ at the test of the previous support or resistance. This gives additional confirmation that the market is ready to go in a favorable direction.

In this case, we have entered the market right after point 2 is broken, which is a little aggressive.

Finally, we need to determine our stop-loss and take-profit levels for the strategy. The stop loss is placed a little higher than point 3, or if one wants to maximize their risk to reward ratio, he/she can place it at a 50% mark between point 2 and point 3. The take-profit is placed at a point where the resultant risk to reward is at least 1:2. However, if there is a hurdle in between, profits can also be taken at such points.

The 123 pattern is a major trend reversal pattern is one of the best strategies for trend reversals. One can trade using this strategy on any time frame. The strategy is based on the idea that the market is losing momentum in the direction of the major trend and could reverse any moment. The probability of this strategy is high and does not require knowledge of technical indicators.