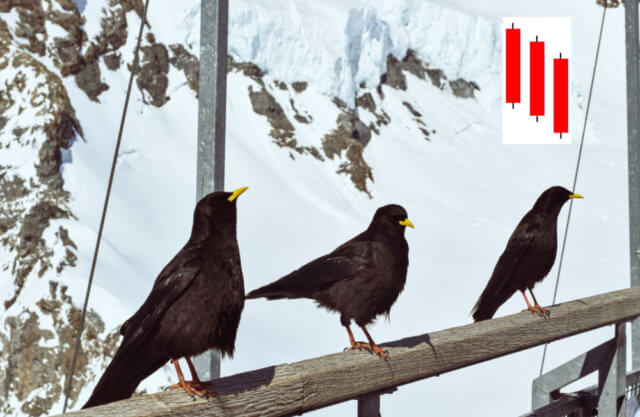 Three Black Crows is a bearish candlestick pattern that consists of three consecutive red candles. This is a visual pattern and can be identified easily on the price action charts. The Three Black Crows pattern essentially indicates a shift in control from bulls to bears. In the book known as ‘Candlestick Trading Technique,’ Steve Nison says that this pattern is one of the most useful ones for longer-term trades.

⭐ In an uptrend, this pattern consists of three consecutive bear candles that have large bodies of roughly the same size. The Three Crows pattern confirms the strength of the sellers.

⭐ Each candle should be open and close lower than the previous candle.

⭐ Each candle should mark a successive decline in price action and should not have long shadows or wicks. Using this trading pattern in conjunction with other technical indicators will enhance the probability of winning the trade.

In this strategy, we have paired the Three Black Crows pattern with the Bollinger Bands to identify accurate trading signals. The Bollinger Bands indicator is developed by the technical trader John Bollinger. It consists of a centerline and two bands above and below the price chart. The bands of the indicator contract and expand according to the different market conditions. In a volatile market, the bands of the indicator expand and in a dying market condition the bands’ contract.

Step 1 – First of all, find the Three Black Crows Pattern in an uptrend.

Step 2 – Take a sell-entry when the Three Black Crows pattern hit the upper band of the Bollinger Bands Indicator.

In the above chart of the NZD/USD forex chart, we can see that the pair was in an overall uptrend. Around the 4th of November, price action prints Three Black Crows, which is an initial clue to go short. Furthermore, price action also respects the Bollinger upper band, which is a sign to go short on this pair.

Placing accurate Stop loss is one of the most critical aspects of successful trading. Some of the novice traders never use stop loss, and it is the biggest mistake they do. We always suggest the traders use the stop-loss order in every trade they take. If you have the fear that your trade might hit the stop loss, then use a deeper stop loss and expect only 1R trades. If you are an aggressive trader, then stop loss above the Bollinger bands is the safest idea.

The basic idea most of the traders have is to exit their positions when price action hits the lower band of the Bollinger band indicator. If you follow this strategy, there will be fewer chances of you making money. Because price action moves in cycles, and prices often hit the upper and lower bands. We suggest you always use the higher timeframe major support area for booking your profits. You can also close your position when the market prints the Three White Soldiers pattern, which is quite the opposite of the Three Black Crows pattern.

In this strategy, let’s learn how to trade the Three Black Crows pattern by combining it with the MACD indicator to identify reliable trading signals. MACD is a trend following indicator, and it stands for Moving Average Convergence and Divergence. This indicator consists of a histogram, moving averages, and a centerline. Traders use the MACD moving average crossovers to identify the trading signals. When the moving averages of the indicator go above the zero-line, it indicates a buy signal. Likewise, when it goes below the zero-line, it indicates the sell signal.

Step 1 – First of all, find the Three Black Crows Pattern in an uptrend.

Step 2 – The strategy is this – when market prints the Three Black Crows pattern, see if there is a crossover happening on the MACD indicator at the overbought area. If there is a crossover, it is a clear sign to go short in any underlying currency pair and vice-versa to go long.

In the image below, GBP/CAD was in an overall uptrend. When price action prints the Three Black Crows pattern, it indicates the ongoing trend reversal in the near future. Furthermore, when crossover happened on MACD, it’s a clear signal that the GBP/CAD is ready to start a downtrend afresh. After our entry, price held for a bit at the support area and dropped to print a brand new lower low.

Put the stop loss above the first candle of the Three Black Crows pattern and close your whole position when price action reached a significant support area.

As you can see in the image below, we closed our full position at the major support area. Overall it was not a smooth ride, but our position didn’t go into loss even for a single time. Traders can also close their positions according to market situations, or according to their trading style.