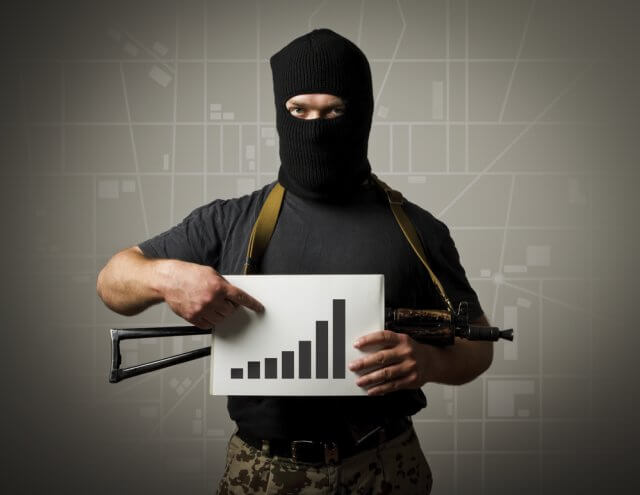 Terrorism Index is a macroeconomic indicator that can influence long term investing and foreign investments flowing into an economy. The smoothness in business activities and productivity of the economy is influenced by acts of Terrorism, thereby affecting the overall Gross Domestic Product (GDP). Hence, understanding the changes in Terrorism Index and its impact can help economists and policymakers make critical decisions towards the country’s growth.

What is Terrorism Index?

Terrorism Index, also known as the Global Terrorism Index (GTI), is a report that gives us a comprehensive summary of the key global trends and patterns in the acts of Terrorism. It is one of the measures of Terrorist Activity in different economic regions.

Terrorism: According to GTI, Terrorism is defined as the threatened or actual use of illegal force & violence by a non-state actor to achieve an economic, political, religious, or social goal through fear, coercion, or intimidation.

It also details incidents of Terrorism throughout the globe for the past 50 years, covering the period of the beginning of 1970 and the change in recent periods. It also identifies and categorizes terrorists into designated groups. GTI also ranks the countries that it covers as per the degree of Terrorist Activity being experienced by those economies. It covers 163 countries that attribute to about 99.7 percent of the world population.

Below is the top ten countries list losing their GDP due to acts of Terrorism. 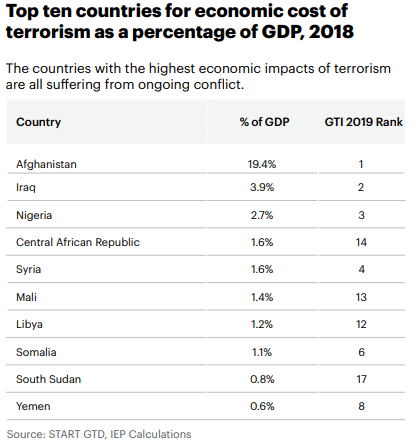 How can the Terrorism Index numbers be used for analysis?

Acts of Terrorism harm the economy. The impact of Terrorism is calculated through IEP’s cost of violence methodology. The methodology includes direct costs like loss of lifetime earnings, medical bills for treatment, and property loss from terrorism incidents. It also accounts for indirect effects like a loss in productivity, job or earning losses, psychological traumas that impact the victims and their associated family and friends.

Prolonged periods of terrorist activities can result in an unstable economy, where people may panic and fear for their life that impacts social order, political tensions, security threats, and leads to economic contractions. The more the terrorist activities, the lesser the chance for governing bodies to spend on public and growth, and the overall majority of revenue goes into combating Terrorism and bringing back the economy to its normal state.

Overall the economic impact is divided into four categories: deaths, injuries or fatalities, destruction of property, and GDP losses from Terrorism. Terrorism has many implications for the larger economies. It depends on the duration, level, and severity of the terrorist activities. Typically, when countries suffer more than 1000 deaths from Terrorism, IEP’s model includes national output losses that are equivalent to two percent of the total GDP.

The deaths from Terrorism has a significant impact overall, followed by GDP losses. The global economic impact of Terrorism was 33 billion U.S. dollars in 2018, 38 percent lower than in 2017. Terrorism also has wide-ranging economic consequences that have the potential to spread quickly through the global economy with significant social ramifications. 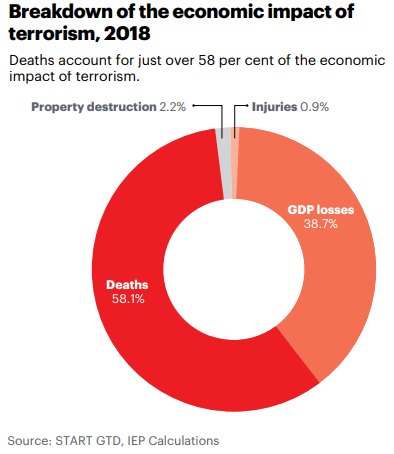 The violence caused by Terrorism, and the fear of Terrorism creates critical disruptions in the economy. It changes the economy’s behavioral patterns, like changes in investment and consumption patterns, diverting public and private away from productive and economic activities towards protective measures. Developed economies are able to absorb the economic shocks of Terrorism better than growing economies. Terrorist activities directed towards specific organizations specifically hurt that company’s stocks in the short-term.

Trades become costlier as it has to account for increased security and higher wage premiums for workers working during such uncertain times. Countries whose main revenue streams include tourism take a severe hit as terrorist attacks significantly reduce tourist arrivals and, accordingly, the revenue from it.

GTI is an inverse indicator, meaning; low GTI levels are suitable for the economy and the currency. High levels of GTI results in allocating a lot of government resources in combating and containing Terrorism. In extreme cases, the regions experiencing high levels of terrorist activities can enter curfews for weeks or even months on end that is bad for the economy.

High GTI discourages foreign capital flow into the economy as investors are not sure of a smooth growth of business and industries within that economy when frequent disturbances are expected.

Terrorism Index is an annual metric and has a low impact on the volatility of the market as it is a lagging indicator and shows the long term trends and studies of Terrorism. The more direct consequences are obvious through other macroeconomic indicators, but GTI is useful for investors and impacts long term growth plans of the economy. High GTI can also lead to shying away from foreign companies to invest and expand in the country.

A decrease in the percentage of GTI is indicative of recovering economy and hence, can be used as a positive signal for growth overall. 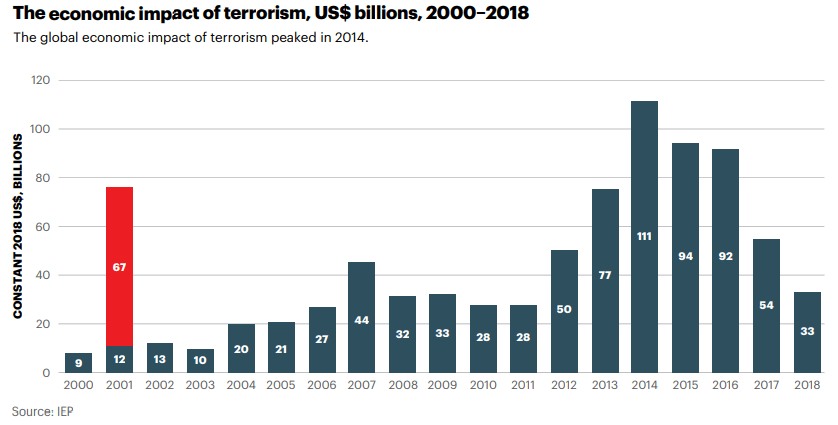 The Global Terrorism Index (GTI) report is released by the Institute for Economics and Peace (IEP) and was developed by Steve Killelea, the founder of IEP. It obtains its data from mainly from the Global Terrorism Database (GTD) and some other sources.

GTD data is collected at the University of Maryland by the National Consortium for the Study of Terrorism and Responses to Terrorism (START). It is an annual report that is released at the year-end, usually around November and December, on the official website of Vision of Humanity organization.

We can find the GTI for different countries listed out in various categories here.

Impact of the ‘Terrorism Index’ news release on the price charts

Terrorism, for instance, impaired the GDP growth of 18 Western European countries from 1971 to 2004, where the GDP per capita fell by 0.4 percentage points. A large terrorist attack can affect financial markets negatively in the short-term. However, in the long term, they continue to function efficiently, absorbing the shock. Therefore, more and more countries try to quantify the effects of Terrorism on the granule level so that the currency is not adversely impacted.

In today’s article, we will be analyzing the impact of the Global Terrorism Index news announcement on various currency pairs and interpret the change in the volatility. For illustration, we have considered the Terrorism Index of the U.S., where the below image shows the Rank, Score, and the Change in Rank from the previous year. It represents the year-on-year Terrorism Index Score of the U.S., which was released in November.

The above image is that of the EUR/USD currency pair before the news announcement, where we see that the overall trend is down, and currently, the price has retraced up to a key level of support equals resistance. From the knowledge of technical analysis, this is the perfect trade setup for going ‘short’ in the market, but since there is a news announcement on the next day, it is wise to wait and then trade based on the numbers. However, aggressive traders take a ‘short’ trade with a larger stop loss above the recent ‘high.’

After the Global Terrorism Index numbers are announced, the price goes lower, and there is an increase in volatility to the downside. But the candle leaves a wick on the bottom and closes near the opening price. Initially, traders bought U.S. dollars because of the positive economic indicator data where the Terrorism Score was better than last time, and the rank reduced by two positions. Even though it was positive, there were some traders who felt it was that robust, which is why the selling did not sustain. One can still go ‘short’ in the pair but with a shorter ‘take-profit.’

The above images represent the ‘daily’ timeframe chart of USD/JPY currency pair, where in the first image, it is clear that the market is moving within a channel, and now it is at the bottom of the channel. Technically, it is the right place for going ‘long’ in the market as one can expect some buying force from here. A ‘buy’ trade is only for the aggressive traders, and others still need to wait for the clarity in news data. But since a news announcement.

After the numbers are published, volatility increases on both sides, and the candle managed to close in green. The market reaction was again neutral in this case as the Terrorism Index data was mildly positive to mixed, which is why the ‘news candle’ forms a ‘Doji’ candlestick pattern. Thus, one can now go ahead and take a ‘long’ position once the price goes the moving average with a ‘take-profit’ near the upper trendline.

These are the images of NZD/USD currency pair, and since the U.S. dollar is on the right-hand side of the pair, a down-trending market means that the U.S. dollar is showing strength. Though recently, the price is moving in a range and right before the announcement, it is at the top of the range, also known as ‘resistance.’ Another important point of consideration is that the volatility has increased on the upside, and this could be a sign of reversal. Therefore, ‘short’ trades from here have to be taken with caution.

After the Terrorism Index data is released, we see that the market moves lower and a moderate increase in volatility to the downside. The news outcome did not create the kind of impact that was expected and seen in other pairs. Thus, we need more indication from the market in order to go ‘short’ in the currency pair.

This ends our discussion on the ‘Terrorism Index’ and its relative news release impact on the Forex price charts. If you have any questions, please let us know in the comments below. Good luck!