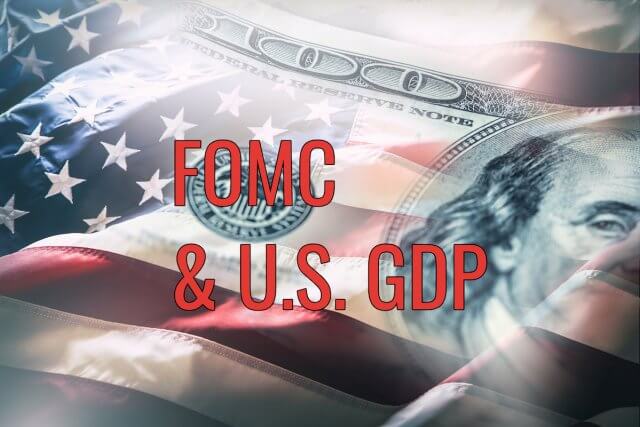 On the forex front, the ICE U.S. Dollar Index slipped 0.1% on the day to 99.96 on Tuesday, as investors awaited U.S. first-quarter GDP data and the Federal Reserve’s interest rates decision due later today. The U.S. Federal Reserve will announce its interest rate decision (hold at 0.00% – 0.25% expected). The European Commission will post the Eurozone’s April Economic Confidence Index (73.1 expected).

Today in the early Asian session, the EUR/USD currency pair erasing yesterday’s losses and crossed above key support at 1.0809 while representing a 0.27% gains on the day mainly due to the broad-based U.S. dollar weakness in the wake of risk-on market sentiment.

The better mood in the risk market supports the shared currency. At the time of writing, the EUR/USD currency pair is currently trading at 1.0847 and consolidates in the range between the 1.0818 – 1.0855. However, the traders are cautious about placing nay strong position ahead of the all-important Federal Reserve (Fed) rate decision.

At the USD front, the dollar index’s (DXY) bounce from the 13-day low of 99.45 reached during Tuesday’s American trading hours, and it ran out of steam near 99.90 early on Wednesday. It’s mostly because both the S&P 500 futures and Asian stocks climbed, as in result greenback is losing its haven demand.

The greenback dropped to multi-week lows against the JPY currency and faced notable declines against the Aussie dollar and the New Zealand dollar mainly due to the better sentiments in the risk market. However, the reason behind the renewed risk-on market sentiment could be the lack of negative updates related to coronavirus. The slight stability in the oil market also keeps the market calm.

The EUR/USD is trading bullish at 1.0868 as the U.S. dollar seems to face bearish pressure ahead of Fed fund rate decision. On the higher side, the EUR/USD has the potential to go after 1.0882, and bullish breakout of this level may drive EUR/USD prices further higher until the next resistance level of 1.0960. The overall trading bias continues to be bullish, especially after the bullish crossover of 50 EMA and MACD. Both of the leading indicators are supporting bullish trend with immediate support around 1.0814. We should consider taking buying trades above 1.0840 today.

During Wednesday’s Asian session, the GBP/USD currency pair flashing green and taking bids near the 1.2475 while representing 0.40% gains on the day mainly due to broad-based U.S. dollar fresh weakness in the wake of renewed risk-on sentiment in the market. The currency pair erased Tuesday’s losses, which were caused by doubt regarding the U.K. government’s coronavirus (COVID-19) figures.

Currently, the GBP/USD is trading at 1.2475 and consolidates in the range between the 1.2423 – 1.2486. However, the pre-FOMC and US GDP sentiments are boosting the currency pair’s strength.

On Tuesday, the official death toll of 552 shows further flattening of the virus curve in the U.K., while the update from the Office of National Statistics (ONS) indicates that the actual death toll in England to April 17 was 54% higher than the government released data report.

On the other hand, the U.S. dollar hit the multi-week lows against the JPY currency and suffered notable declines against the Aussie dollar and the New Zealand dollar mainly due to lack of its demand ahead of FOMC and U.S. GDP. The Dollar index’s (DXY) climbed from the 13-day low of 99.45 reached during Tuesday’s American trading hours ran out of steam near 99.90 early Wednesday, as the S&P 500 futures and Asian stocks rose, as in result greenback is losing its haven demand.

At the Brexit front, the report came that the discussions between the European Union (E.U.) and the U.K. regarding new trade arrangements from next year continue to postponed mainly due to disagreements and the coronavirus crisis. Besides this, the U.K.’s international trade secretary Liz Truss said that the E.U. is expected to stick under pressure and agree to a post-Brexit trade deal with the U.K.

Whereas, the safe-haven demand for the U.S. dollar continues to lose due to the better mood in the equity market as hopes of re-opening of the economies in Australia, New Zealand, and parts of Europe boosting the market sentiment. Moreover, the dismal U.S. C.B. Consumer Confidence data, as well as the hopes of sharp U.S. economic contraction, keeps the U.S. dollar under pressure.

The currency pair continues to follow the broad-based U.S. dollar directions so far this week, with the latest stop in the dollar decline offering some support. The U.S. dollar index trades at 99.70 after hitting a daily low of 99.63.

The reason behind the risk-on market sentiment could also be the upbeat comments from the BOJ Governor. The Bank of Japan (BOJ) Governor Haruhiko Kuroda said on Tuesday that Japan’s financial system remains firm because a whole as bank groups have satisfactory capital buffers.

On the technical front, the USD/JPY was facing solid support around 107, the round figure, but it got violated over increased demand for safe-haven yen. At the moment, the USD/JPY is facing strong resistance around 107, along with support at 106.500, but this support seems weaker, and we may see USD/JPY prices falling further until 106.240 later today. Looking at the leading indicators on the 4-hour timeframe, we may see USD/JPY prices are holding below 50 periods EMA, and at the same time, the MACD is also holding into a negative zone. Let’s look for selling trades below 106.800 today.