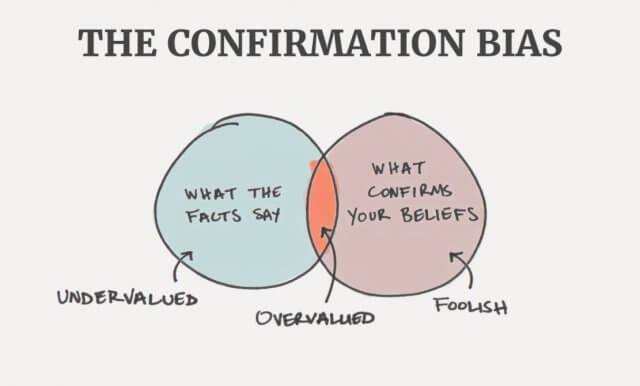 Biases can have an effect on anything in life, from the food you wat, the places you visit, and when we are looking at Forex, the trades you take, and the reasons behind them. We have looked at some of the more common biases that you find within the Forex trading world.

This is something that you get in any industry, you see it most often on the internet or during an argument where someone will come up with an idea that sounds a little far fetched, they will then look over the internet to find sources of information that match what they have said while looking for evidence is good, it’s not when you skip over 10 different pieces of information that counter yours, just to find the one that confirms it.

The exact same thing can happen in trading, you have done a little bit of your own analysis and come to a conclusion, so you want to confirm it with others, when you look online for it, you will automatically be looking for analysis that is the same, so if you thought something was bearish, you will be looking for bearish information online, even your search may contain that exact word. So you may find an article that matches yours, but the 10 articles around it may state that the market is bullish, ignoring those counter-arguments can cause an increase in losses. Looking for unbiased analysis is the best way to go, although we know it can be quite difficult to find.

This is often referred to as a Sheep mentality, have you ever found yourself doing something simply because other people are? If a Sheep decides t ogo somewhere, another may follow, then another and another until the entire herd is doing that action or going t that place, that is where the term sheep mentality comes from.

This behaviour can be seen in trading too, if the majority of people are going long, then it is far more likely that the next person to come along will also go long, then the next and then the next. It’s natural to think that if the majority are going one way, they must know something, but this is not the case. You have done your analysis, it all points to a short position, so take that short position, why did you waste all that time just to be persuaded by a group of people, most of which most likely did not actually research anything. Take the trade the way you analysed it, if it’s wrong, then you can learn from that mistake through your journal, but if you go long because everyone else did, you learn nothing as you do not actually know why you took the trade in that direction.

This is all about what you feel is responsible for a loss or a win, when we look at trading, when we win, we often congratulate ourselves on a great trade, we analysed things well and it paid off. When it goes wrong, who is to blame? It was what Trump said, it was a freak movement in the markets, it was anything but me that caused it.

It is very natural for humans to want to blame someone or something else for their misfortune, however, it is important to be able to look at something without this bias, being able to determine exactly where the trade went wrong, and what you did wrong is one of the best opportunities that you have agave to learn. Simply putting it down to an uncontrollable outside force does not teach you anything, it does not help you to adapt and it does not help you with becoming a more profitable trader.

This one is all based around excitement, the thrill of getting a big win, the idea of getting a big win. Our minds will always want to retain memories of those most exciting trades and the ones that made us the most money. This can often lead to something called an addiction bias, where we want to try and recreate that exciting experience. Having that huge trade in the back of your mind can make you break out of your sensible strategy in order to put on a larger trade to try and recreate that feeling, this is never a good idea, it goes against your risk management and into a territory of trade that is outside of your strategy, making it harder to predict and a lot more dangerous for your account. Use those large trades as a reminder of what you can achieve, but do not try to fast track yourself to that outcome.

This is about thinking about the most recent thing that has happened and making decisions based on that one event, rather than looking at things as a whole. This can be quite prevalent with news traders, especially now Trump is the president. If there are a number of news events coming up for USD, the overall markets are bullish at the moment, the most analysis points to a bullish movement, the news comes out and it is negative (bearish). What do you do? You put on a sell because the news can move the markets down, but, nothing happens, it continues to rise, why? The reason is that the markets are still bullish, one bit of news won’t change that, you have looked at the most recent event to happen and ignored everything else. You need to maintain a view of the entire picture, not just the most recent even to happen.

So, those are some of the biases that we see both in life and in trading, are you guilty of them? I know I have been, it’s ok to have these biases, what is important is that you are able to identify them, and then work on avoiding them in the future.