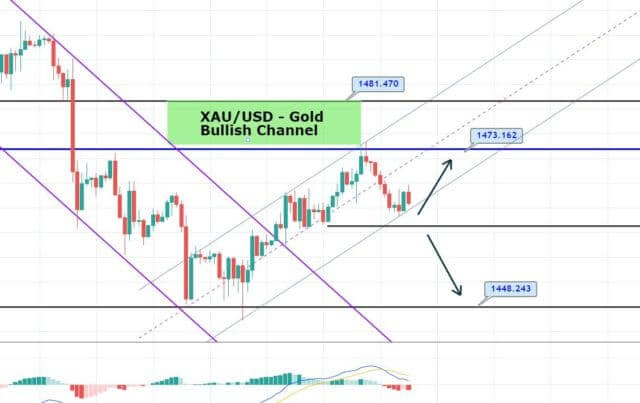 Fresh certainties regarding the United States and China trade deal returned after the goodwill gestures by the Dragon nation as China lifts the restrictions on the United States poultry imports. Additionally, the headlines of the restart trade talks later on the day also improve the risk-on market.

At the Kudlow front, the latest comments from the White House Economic Adviser Kudlow announce that we are very close to getting the trade deal with China, so in the consequences, the bounce-back came in the U.S. Treasury yields and S&P 500 futures.

On the 2 hour chart, the yellow metal gold is trading in a bullish channel, which is supporting it around 1,461 level along with a resistance level of 1,473. The new 2-hour candle is bullish marabou, which signals the chances of a bullish trend in gold.

The leading indicators, such as MACD and RSI, are still trading below 0 and 50 level, supporting the bearish bias in gold. With that being said, gold prices may drop further until 1,452 level of it manages to give us closing below 1,460 level.

Likewise, the bullish breakout of 1,473 resistance opens further room for buying until 1,479.