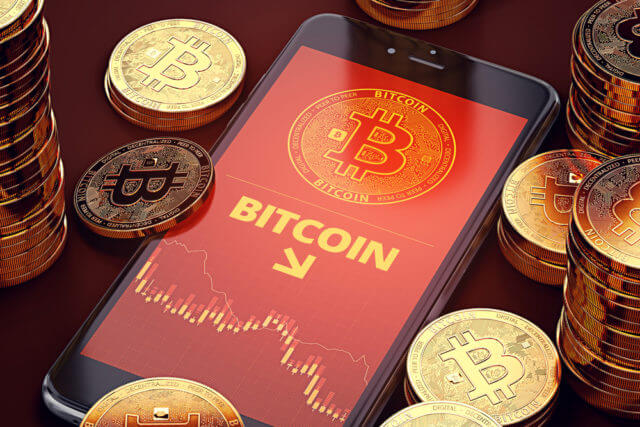 Of the top100 cryptocurrencies by market cap, the biggest gainer is DxChain Token, with 28.38% daily gain. The biggest loser of the day was Synthetics Network, which lost 8.55% of its value. 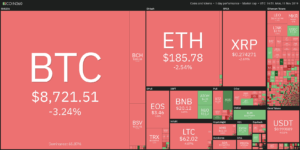 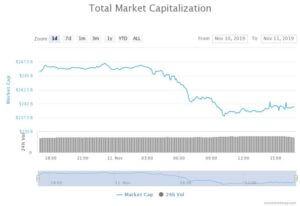 The cryptocurrency market as a whole now has a market capitalization of $239.5 billion.

The Joint Chiefs of Global Tax Enforcement which include representatives from the US, UK, Australia, Canada as well as the Netherlands talked about cryptocurrencies and ways that people avoid taxes as well as how to potentially stop it. The IRS stated that they are now better suited to tackle cryptocurrency tax evasion.

The IRS also claims that they already identified “dozens” of suspects by using the knowledge they obtained during this forum.

Bitcoin had a rough weekend as cryptocurrency markets tumbled down. However, its price recovered fast, and the outlook is slightly bullish at the moment. During the drop, the price reached the price of $8,650, but bounced back quickly. All the key levels proved to be well-respected. However, Bitcoin’s price took another blow this morning. Bitcoin fell under the $8,820 line. BTC is now held by the support standing at $8,640.

Bitcoin’s volume keeps decreasing more and more if we exclude occasional volume spikes which result in sudden price drops. One change in the key levels is that the support level of $8,820 was not respected well enough, so it will be removed for now.

Ethereum spent quite a few days of the past week contained within a range between the resistance line of $193.5 and a support line of $185. When bears took over the market, the price fell below the support line and reached a price of $180. However, as time passed, Ethereum regained its strength and moved back to the same range it was in previously. It is currently trading at $186.

Ethereum’s volume had a big volume spike which helped it cross the $185 resistance. However, that volume died down quickly. The key levels remain the same as Ethereum is back in the same position as it was before the weekend.

Unlike Bitcoin and Ethereum which mostly recovered from their latest price losses, XRP failed to do so. After bears took the market in their own hands, XRP fell to the price of $0.27. Bulls quickly came to the fight but failed to form enough buying power to pass the $0.285 resistance level. XRP is currently positioned between the $0.285 resistance and $0.266 support, with its price being $0.275 at the moment.

XRP is currently trading with a volume that exceeds the average by quite a large margin. The only change to key levels is that the $0.285 is now acting as resistance rather than support.