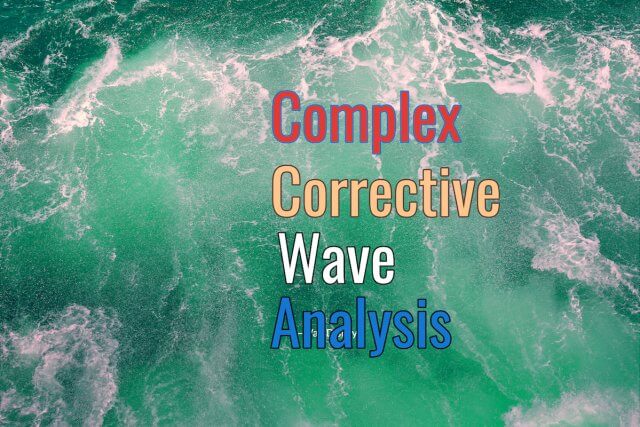 Complex corrective waves are groups of waves that do not have an internal structure subdivided into three or five waves. In general, complex corrections tend to appear in waves fourth or B. Moreover, these formations are divided into two categories standard and non-standard.

An impulsive or corrective Standard wave formation does not imply that it is formed by a series of three or five adjacent segments. Usually, one of its corrective waves will possess a greater number of internal subdivisions creating a more extensive structure in terms of time. This condition will create a context in which can verify the alternation principle.

If the standard complex wave is in an impulsive sequence, it may be in wave 2 or 4. Otherwise, if this complex wave appears in a corrective phase, it will be between waves A and B.

The following figure shows a simplification of standard complex waves in an impulsive sequence and a corrective structure. 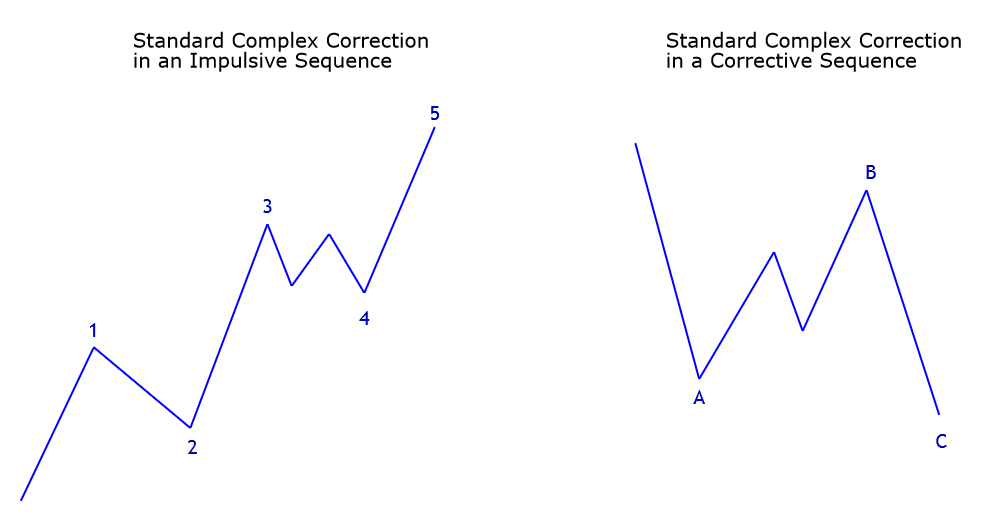 Complex corrections only occur if there are at least two corrective sequences compacted in their three-wave structure and separated by a corrective formation that acts as a connector between the two corrective patterns. This type of waves must be given under certain conditions; likewise, they must meet specific rules that occur only once the waves have been compacted.

If the grouping conditions commented previously don’t meet, then the corrective structure shall be standard. In this case, the wave analyst should work the corrective sequence in the same way as discussed in the section “Corrective wave analysis – Intermediate level.”

On the other hand, the extension or duration in the time of the corrective wave doesn’t affect its analysis. A complex corrective structure can last for days and even years without this changing its structure. In this context, the wave analyst must maintain order in the use of the labels of each formation.

The first principle of a complex corrective wave implies the existence of a wave X, which acts as a connector for two standard Elliott corrective wave formations. The wave analyst should keep in mind that this point is the key to understanding non-standard patterns.

There exist two conditions to recognize the behavior of waves x.

If the market develops one of the two conditions commented previously, the market has likely developed a non-standard corrective formation.

In this educational article, we discussed the fundamental principles of a complex corrective structure and the importance of wave compaction in identifying and analyzing wave structures.

In previous chapters, we have seen how to recognize the principle of alternation in the analysis of both impulsive and corrective waves. In this sense, the wave analyst must take into account this concept, which will allow him to identify what will be the next most likely movement.

In particular, R.N. Elliott, in his work “The Wave Principle,” defines the alternation of corrective waves and their complexity as follows “if a corrective wave is simple, the following will be complex, and vice versa.” Within a complex corrective structure, the compacted corrective patterns that compose it will also alternate with each other.

In the next article, we will look at the construction of complex corrective waves according to each condition.