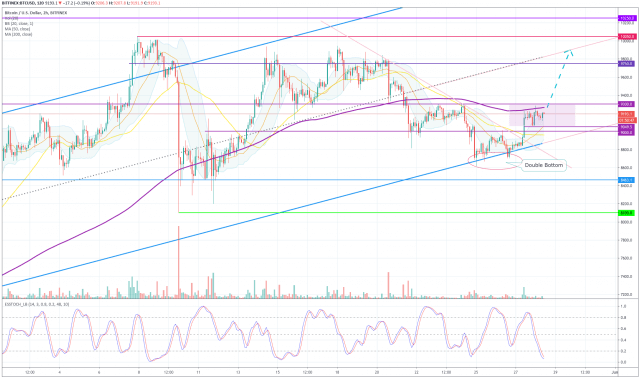 Bitcoin made a high-volume bullish candle after a double bottom touching the lower edge of its bullish channel. After bouncing off of its 200-SMA has created a consolidation channel in which you see two engulfing candles, after a bounce from the 50% level of the initial bull candlestick.

On the other hand, the Stochastic RSI indicator is in its lower side of the range, ready to make a crossover to upper levels. Thus, instead of waiting for the $9,300 break, we could test the strength of the market and make a spot order at the current levels with a relatively tight stop 100 pips under the current level and see if the strength shown continues.

The channel shown is a linear regression channel, with the edges separated + and – two sigmas from the real regression line. Thus a bounce off the -2-sigma edge means a value buy and a progression towards the consensus, or fair price, which is represented by the regression line shown in dotted gray/red. This action is a high probability event in this kind of mean-reverting market, such as is happening with Bitcoin. Moreover, the trade goes with the main upward trend. Thus the target is set conservatively below that level, at 9,740.

Reward: $540 on each BTC purchased