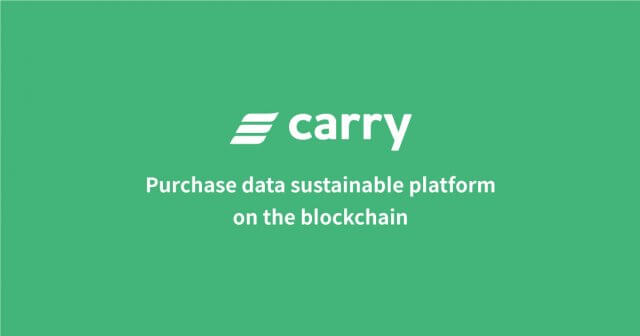 Today’s commerce environment is extremely fragmented: merchants don’t know what consumers want, consumers don’t have control over their own data, and advertisers’ campaigns are ineffective. It’s particularly unfair for consumers, who, by clicking “I agree” to terms and conditions, effectively hand over the rights to their data.

Blockchain has the potential to change this skewed state of events. The Carry Protocol, launched in 2018, is a project that’s using blockchain technology to fulfill this endeavor. Carry allows every participant of the commerce ecosystem to benefit in a transparent, fair, and trustless environment.

Carry is a data management ecosystem where data owners are accorded complete control over their own data, plus the ability to monetize that data. On the Carry, the platform is consumers, advertisers, stores, and more players in a collaborative and transparent environment where everyone gets their fair share.

Carry provides a bridge between offline merchants and consumers. This is in cognizance that despite a surge of e-commerce in recent years, most consumption still happens offline. And the offline market is, to a large extent, yet to embrace technology in so many ways. Offline commerce faces the following challenges:

Carry aims to solve this through the following initiatives:

As we’ve noted already, Carry brings together merchants and consumers through the blockchain. These two are the most important participants in the ecosystem. The other participants are advertisers.

The transaction database is the storage location where data is uploaded by consumers and generated by merchants. Carry smart contracts are in charge of issuing the protocol’s token: CRE. Carry wallets allow users to manage their crypto, control their transaction data, and manage their privacy.

Carry wants to create a system where merchants, customers, and advertisers can all benefit. Stores can have a better understanding of their consumers with the purchase data they willingly share. Advertisers can create more effective ad campaigns, and consumers can own the rights to their data and monetize it.

Merchants can better understand the preferences and expectations of consumers.

Consumers can control their information and get rewarded in CRE tokens for sharing it and viewing ads.

Advertisers can better target the right consumers through better analysis of their information.

Users can get access to the Carry protocol features through smart contracts. To do so, they must first stake in Carry tokens (CRE). This can be done in a one-off or pay-as-you-go way. Staking in a certain amount of tokens, allows usage up to a certain level. When usage exceeds that level, the user must pay for excess usage.

The rationale is that executing smart contracts uses up the protocol’s resources, which incurs costs. The staking model also protects the protocol from attacks – whether abuse by malicious participants or denial of service attacks.

The per-use fee can always be set higher than the stake’s opportunity cost, which would encourage users to stake in more CRE. If a merchant wants to conduct more transactions than their stake allows, they can offer perks to other platform users, e.g., customers, who will then stake in more tokens on their behalf.

The Carry team plans to expand the growth of their protocol by engaging in the following strategies:

The Carry token was distributed in the following manner:

Where to Buy and Store

The Carry token is listed against currencies such as KRW, USDT, BTC, and HT on several exchanges, including Upbit, Huobi Global, BiKi, Bilaxy, UPEX, and Oasis Exchange.

You can store CRE in a wide range of wallets, including Trust Wallet, Atomic Wallet, MyEtherWallet, Ledger, and Trezor.

Carry is one of many blockchain protocols that want to do better for millions of consumers whose data is generally used without their authorization. And it doesn’t stop at just consumers; it aims to improve things for every other player in the commerce arena. Will it stand out in the years to come? That will depend on if they can continue to innovate. If not, they risk being phased out by more forward-thinking similar protocols.