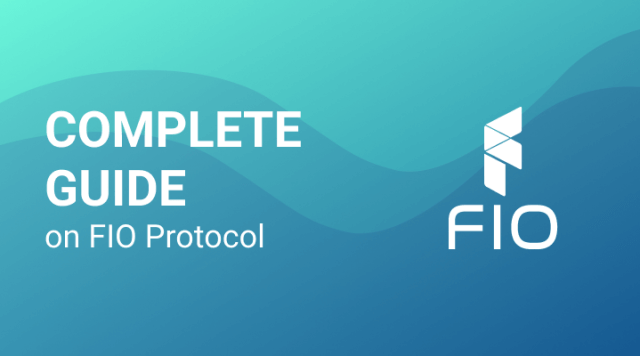 Everyone who has interacted with crypto one way or another knows how daunting it can be – especially if they’re just beginning. This is due to the complexity of crypto transactions and the knowledge that your funds could be gone forever with a tiny mistake.

What if there was a seamless way that you could operate your account? What if you could interact with crypto using an everyday name instead of an intimidating public address?

Launched in April this year, FIO protocol (Foundation for Interwallet Interoperability) is an initiative that wants to make this possible. FIO says it wants to “make crypto products easier so anyone can use them.” It’s a platform that integrates exchanges, wallets, and more so people can have a better experience dealing with cryptocurrency. The FIO team believes the blockchain-based value wave is the inevitable future, and that “the masses are coming and we owe it to them to give them the experience they deserve.”

In this article, we’ll examine the FIO protocol from a closer vantage point. We’ll also look at the utility token of the protocol and what role it plays.

What Problem is FIO Hoping to Solve?

FIO’s vision for the blockchain space is based on actual research. The team conducted a survey in 2018 to establish the challenges that crypto users face – whether just operating their own account or sending money to others. They were then able to come up with the following feedback:

The team then concluded that interacting with crypto generally is pretty stressful and requires a user to be extremely vigilant.

What are the Goals of the FIO Protocol?

The FIO team wants to create a better way for people everywhere to interact better with blockchain assets. This way encompasses several features, which are:

The FIO protocol can support a variety of features – which we’ll look at below.

i) FIO Addresses – intelligible wallet identifiers such as tom@trustwallet” and “alice@bitcoin,” which are more friendly to use. With the addresses, users will not come across public addresses. The icing on the cake? The addresses can support any crypto in any wallet or exchange.

ii) FIO Requests – a functionality that allows users to request funds from any wallet via simple approvals. The requests are cryptographically secured and are only seen by the involved parties. FIO requests will not interfere with underlying blockchain transactions in any way

These are just the current features of FIO. The network hopes to add more in the near future.

The FIO protocol utilizes delegated proof of stake (DPoS) for network consensus. Token holders are responsible for choosing block producers (BPs). Anyone can sign up to be a BP if they can garner enough votes. Every voting round is known as an epoch, and it involves the generation of 126 blocks. The BP selection process is repeated after every epoch – which involves 42 BPs – half active and a half on standby.

After each block is produced and recorded on the chain, the network mints new rewards. 40% of the reward is equally shared among the 21 active BPs, while 60% goes to all 42 BPs in a manner proportionate to the number of votes each BP received.

Additionally, BPs can change system settings if they have two thirds plus one (at least 15) majority.

How Do You Use the FIO Protocol?

As of now, the FIO protocol supports wallets, exchanges, and payment processors. The team is also planning to develop a suite of software development kits and APIs for developers that desire to use them.

Now for the everyday user – using FIO is so simple. You just need to register an FIO address and immediately access loads of FIO capabilities.

FIO token is the utility token of the FIO platform. It will be used as payment for transactions done on-chain. Other uses include fees for registering addresses and staking so as to vote for block producers. To hold FIO tokens, all you need is a pair of private/public keys. Transfers can be done through an FIO public key – which means one can hold FIO tokens without relying on a complex process.

The team envisages demand for FIO arising from:

How Was FIO Distributed?

Where to Buy FIO

The FIO token can be bought/exchanged at a variety of exchanges, which include Binance, BitMax, BitHumb, HotBit, Binance.KR and Hoo.

FIO might just deliver the most important of all crypto initiatives: making it extremely easy to send and receive crypto. Interacting with crypto may sound like a walkover, but the story is starkly different for many users. FIO’s solution is simple yet potentially revolutionary. For us here, it will be thrilling to watch the project evolve.