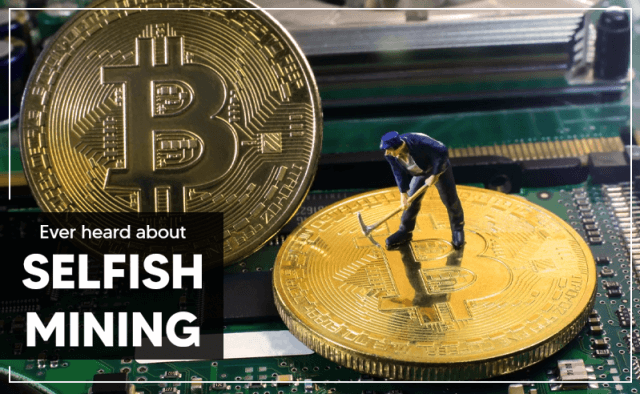 Mining is the process through which new Bitcoin blocks are generated. Individual nodes on the Bitcoin network race against time in a series of guesses for the right block. Due to the large size of the network and transaction load, this process is resource-intensive – it requires sophisticated computing equipment and consumes massive amounts of power.

Selfish mining is when a miner withholds newly generated blocks then releases them to the public ledger when they have formed the longest chain. Other legitimate miners may join the selfish miner on their private network due to the possibility of higher returns. The practice is neither illegal nor disallowed, but selfish mining undermines Satoshi’s vision of decentralized production and distribution of money.

Mining involves solving complex cryptographic puzzles, which are guesses. Depending on the difficulty of the puzzle being solved, and the associated power costs, the reward you can earn from this process can vary greatly. As such, even if miners combine effort, the overall output for each miner is proportional to the individual effort invested.

This was the case until researchers Ittay Eyal and Emin Gun Sirer discovered that miners could actually cheat the system by hiding the newly-generated blocks from the public blockchain. Transactions will still be verified, and new BTC generated because the newly-generated blocks are made available on the selfish miners’ private networks. By withholding the new blocks from the public blockchain, such miners circumvent the infrastructure restrictions that make mining resource-intensive and speed up the discovery process.

Whatever makes selfish mining possible is a vulnerability on the Bitcoin network that uses the longest chain rule to indicate which chain to follow. Usually, the correct chain to follow is the one with the highest number of new blocks – in other words, the one with the highest proof of work. Since it is possible to withhold a block and release it after accruing several of them, one can always wait until they have several blocks then release them to the public blockchain. This will result in other miners following that chain and surrendering their earnings to the owner of this chain.

How It Impacts Bitcoin’s Integrity

Undoubtedly, selfish mining poses a threat to Bitcoin’s integrity. Cryptocurrencies sell on the premise that they are decentralized and tamper-proof. Thus, the idea that a group of people can collude to subvert the system’s mechanics raises concern.

Of particular concern is how selfish mining increases the possibility of a 51% attack. Over time, selfish miners can create mining pools with an ever-growing hash rate. As more parties join the pools, their chances of acquiring majority power increases. Eventually, this may allow them to block other miners, reverse transactions, exclude transactions, and so on. However, considering how large the Bitcoin network is, there is only a low likelihood that a mining syndicate will gather enough resources to take most of the power. Additionally, Bitcoin enthusiasts believe that the motivation for selfish mining is lower than the rewards. If other parties decide to join selfish miners in their pools, they might eventually be unable to recover the investment they made in their mining operation.

The practice of selfish mining is also wasteful in that miners spend serious resources trying to find a block that another miner is withholding. Thus, it is only economical for all miners to just play by the rules. In short, this is neither a sustainable nor responsible way to generate earnings on the Bitcoin network.

Decentralization is at the heart of Bitcoin’s philosophy. Satoshi envisioned that no person or group of people would have the authority to control the production or distribution of coins on the network.

Is It Anything New?

Selfish mining is not entirely new, and for that reason, it should be particularly worrying to Bitcoin users. At the moment, two-thirds of all Bitcoin generated is mined in China, which is not a result of selfish mining. It just happens that it is easier to access ASICs in the country, plus electricity is way cheaper there than in other mining locations. As such, concerns have been raised about whether China has had a mining monopoly of sorts. Whatever the case, there is no indication that Chinese miners are working as a single enterprise.

If only a few miners adopt selfish mining, the overall impact on the blockchain network will be negligible. On the other hand, if all miners, hypothetically, take up selfish mining, their efforts will cancel out. Renowned economists have reiterated that it seems to make sense, while theoretically, the practice is not economically viable. Paul Sztorc, a popular economist, thinks that selfish miners will lose motivation upon realizing they are only backstabbing each other. In conclusion, selfish mining does not have enough economic motivation to become a widespread practice.

Also, this activity may adversely impact Bitcoin’s reputation, which may cause its price to drop. Consequently, selfish miners will earn more Bitcoins but ones that are devalued.

What’s the Future of Selfish Mining?

Selfish mining is likely to remain in theory or limited practice due to the reasons we’ve mentioned earlier. As we have seen, the major challenge with this practice is that if it becomes widespread, it will turn into a dirty game as selfish miners will be competing in hoarding new blocks. While this decreases the economic motivation, it might not exactly protect the Bitcoin network from the inefficiencies created.

So, what would be a better solution? A research paper has proposed a scheme for penalizing nodes that withhold new blocks. The proposal ensures that miners who generate new blocks and fail to publish them on the blockchain have their mining rewards reduced. This would be an ideal penalty for selfish miners, but it appears as if the practice is not a huge threat currently.

Selfish mining can allow mining syndicates to increase their revenue by always creating the longest chain and attracting other miners to their pools. While the threat is realistic, the likelihood of widespread selfish mining is diminished. The practice is wasteful, and if it becomes widespread, all miners lose their rewards. As we wait to see if indeed the threat will ever become substantial, Bitcoin users can rest easy knowing that Satoshi’s vision of decentralized production and distribution of money lives on.